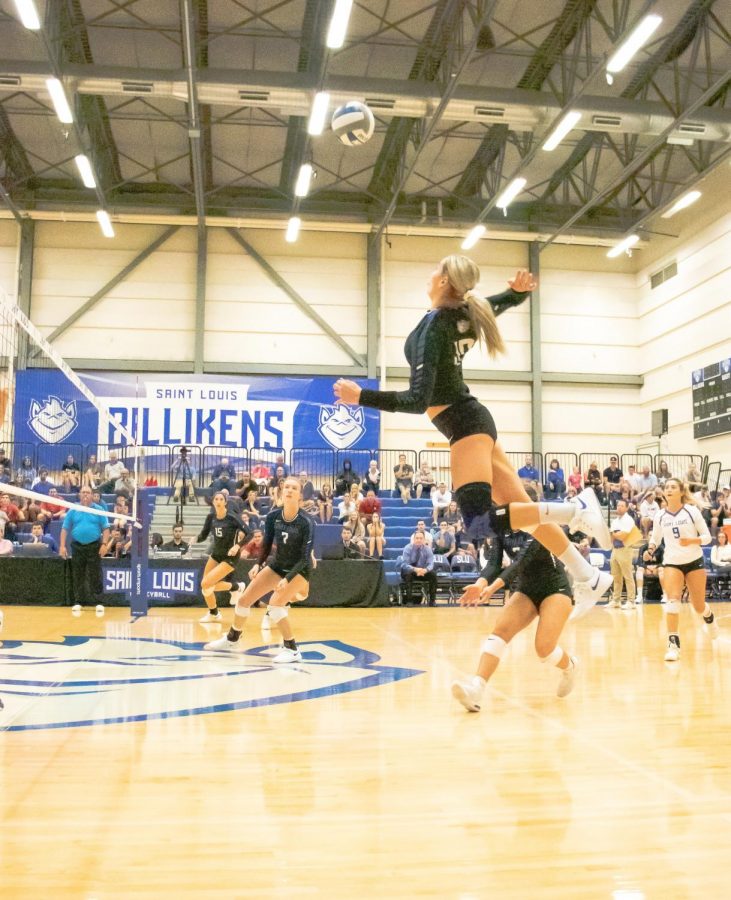 In an unusual midweek matchup, the Billikens volleyball team took on Southeast Missouri State in their first five-set match of the season. Despite the rally to send the match into the fifth set, the Billikens fell short in the shorter frame for the 3-2 loss to the Redhawks. With the loss, SLU fell to 6-4 on the year, going 5-2 in the Pavillion in Chaifetz Arena.

The Billikens dropped the first set in a close 25-23 contest that saw eleven ties and six lead changes between the two squads. SEMO was able to score the last two points of the set from tied at 23 to 25 for the win. After losing the first set, the Billikens rallied to take the second in a more commanding fashion, 25-18.

Much like the second set for the Billikens, the Redhawks took the lead early on in the set and maintained it throughout for the 25-16 win. The Billikens were now in a hole and had to come back from being down 2-1 in the match.

The comeback was enacted for the Bills and they fought tooth and nail to squeak out the 25-23 to force a fifth set in the match. Seniors Sien Gallop and Lauren Mershon recorded back-to-back kills to give the Bills a lead they were able to hold on to.

The comeback mentality didn’t carry over for the Billikens into the fifth set because SEMO jumped out to a seven-point lead. SLU was able to bring the game back within striking distance, but the Redhawks held onto the lead, and eventually the match.

In the match Gallop lead the Billikens with 24 kills and junior Maya Taylor had a double-double with 18 kills and 11 digs. Sophomore Emily Imo had a game-high 18 digs to add to her season totals.

This weekend, the Billikens head north to Milwaukee, Wis. for the Marquette Invitational. They will face off with host, eighth ranked Marquette, Green Bay and Northern Iowa.