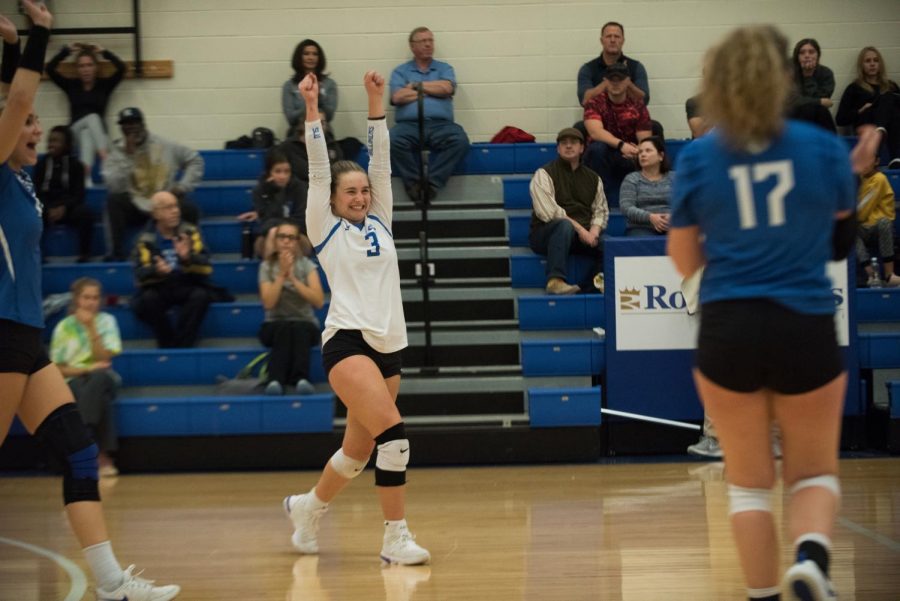 The SLU women’s volleyball team continued their recent success with two more victories this weekend. The Billikens knocked off George Mason on Friday night and defeated George Washington on Sunday afternoon. In the process, they moved their current win streak to eight games. Friday’s match was a hard-fought victory in five sets, while Sunday was a three-set sweep for the Bills.

Despite facing the last-place team in the Atlantic-10 on Friday night, the Billikens got off to a slow start. The Billikens fell behind early in the set but regrouped after head coach Kent Miller called a timeout with his team trailing 7-1. A strong rebound followed with a brutal kill by Sara Daniels, which hit a George Mason player in the face and providided a key momentum builder. But the comeback was unsuccessful as the Bills lost the first set by a score of 25-23.

SLU opened the second set quickly with an 8-2 run.  They controlled the rest of the way to win the second frame 25-22. In the third, the teams engaged in a back-and-forth battle, as there were five ties and four lead changes. The Billikens made a late 8-3 push that ultimately gave them control of the set and match. They won set three 26-24 and took a 2-1 advantage in the match.

Momentum shifted, and George Mason took set four in a controlling fashion, 25-19. The teams moved to a fifth set tiebreak. The final frame proved to be the most thrilling of the evening. With seven ties and three lead changes, the teams went back and forth. After being tied at 14, the Billikens won the next two points and finished the match with a massive kill by Sien Gallop.  Gallop played a pivotal role throughout the night, tallying a career-high 27 kills. Her play was key to the result, especially in the final set.

On Sunday, Gallop and the Billikens picked up right where they left off against foe George Washington. The outside hitter tallied six kills in the first set as the Billikens won the frame 25-17. They closed the set on an 18-10 run after being knotted at seven all.

In the second set, the teams battled throughout the set, but the Billikens controlled late to win 25-23. SLU continued to play strong in the final of three sets with an opening 15-8 run. However, GW battled back to tie the set at 17. Despite the charge, the Bills held on to sweep the weekend and the match in another 25-23 victory. Leading the way in the match was Junior Kennedy Cordia who collected 32 assists this day and moved to fifth on SLU’s career assists leaderboard with 2,349 assists overall.

After another strong weekend, the Billikens are rolling and full of confidence according to Senior Sien Gallop. Gallop said the team “knows the confidence that [they] have,” in reference to facing adversity over the course of a match. She attributes that confidence and success to her teammates and the bond they have formed. “We have become such a family, and there is not one person on this team I do not trust. We have turned the family aspect into something that is our culture,” remarked Gallop.

The Billikens will continue to use their “family” culture to work toward their goals as the regular season winds down. Sitting at third place in the Atlantic-10 standings, they will look to avenge an earlier loss as they travel to Dayton to face the first-place Flyers this Friday. Their family culture will play a pivotal role if they want to continue their winning streak and reach their main goal: to win the A-10 championship.