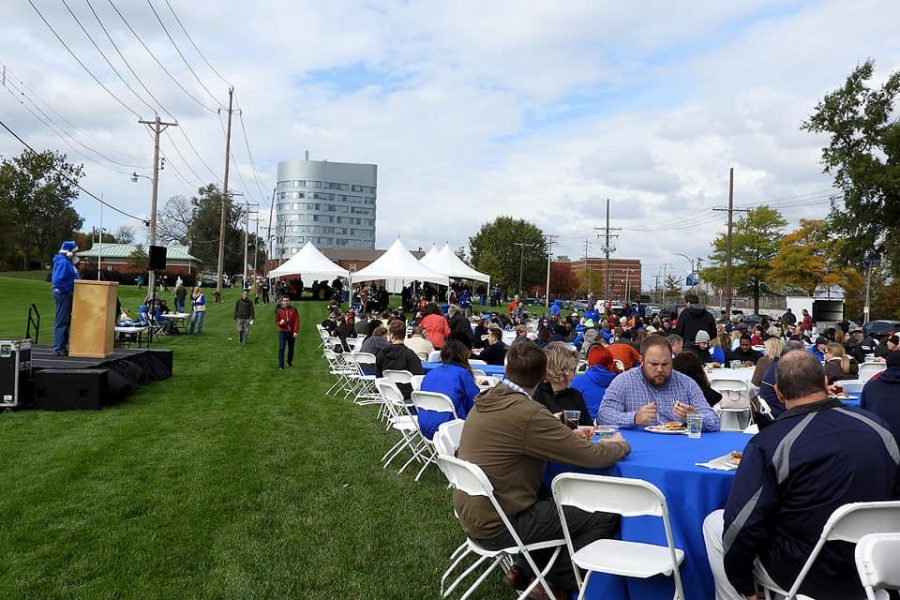 On Tuesday October 22 SLU held its annual Cannonball Staff Appreciation Picnic on the Quad by DuBourg Hall. Employees received a free lunch of hot dogs, cupcakes, and lemonade as a token of appreciation by the University for all of their hard work. Sr. Virginia Herbers, ASCJ, of the Office of Mission and Identity, offered the picnic’s invocation and then the gathering continued with some lucky SLU employees winning prizes. University President Fred P. Pestello, Ph.D sent a video message via email to SLU staff members announcing three bonus December holidays. Pestello was traveling on University business but thanked staff members for their many contributions to the University and SLU life in the video. “On behalf of the University, I want to thank all our staff members for your belief in the University,” said Pestello. “I hope that these extra days allow you to spend more time reenergizing, reflecting, relaxing in the company of your loved ones.” The University will officially now close at the end of business on Friday, December 20, and will re-open at the start of business on Thursday, January 2. The extra holidays will now be Monday, December 23, Friday, December 27, and Monday, December 30. SLUCare and other select employees would be able to bank the extra holidays without impacting their vacation time totals. This will bring the total fiscal year holidays up to 18 days off.

The addition of three extra vacation days for SLU employees has been included for past SLU Cannonball Picnics if the schedule permitted. Administrative Assistant for the Vice President of Human Resources Mary Krieg said in regard to the staff appreciation picnic which she helped organize, “We’re an expense, we don’t generate revenue for this school so maybe [SLU] thought we should do something to say thank you.” The desire to express thanks is especially prevalent considering that SLU staff members have gone several years without receiving pay raises. In regard to the lack of pay raises for staff over the past few years Krieg referred to the decline of student enrollment explaining that “it’s the nature of the beast.” Krieg explained how the extra vacation days added this year were much appreciated by SLU staff “since we didn’t get any pay raises this year” and how “this was a very nice consideration from the President for us.” The picnic was organized through a collaborative effort between Human Resources, Event Services, and Cater SLU. As one of the organizers of this event Krieg felt the Cannonball Picnic ran quite smoothly and pointed to how “we had lovely weather.” If the weather did not permit as much as it did for the Picnic, Krieg pointed to how her and the other organizers “every year make a backup reservation.” For this year’s picnic the backup location in case of rain would have been the Wool Center. Vice President for Human Resources Mickey Luna shared Pestello’s words of thanks and praised SLU staff members for helping to cultivate a culture of service and kindness to others in a variety of ways.  “Even a single act can have a huge impact on the people we serve,” Luna told the crowd of staff members in the Quad. In reference to how her and fellow staff members positively contribute to SLU life Krieg maintained how “it’s all part and parcel of attitude” and how students “want to come to a University where the staff are kind [and] we try to be helpful.”

The Cannonball picnic was named to honor a crucial moment in the life of St. Ignatius of Loyola, the founder of the Society of Jesus. As the Battle of Pamplona in 1521, St. Ignatius was hit by a French cannonball, which shattered his leg. During his recovery, the Spanish knight immersed himself in the study of the lives of the saints and the Bible. This experience would put St. Ignatius on a path that would lead to the founding of the Jesuit order and eventual sainthood.