The Shirts that are Shaping St. Louis- and the Woman Behind it all 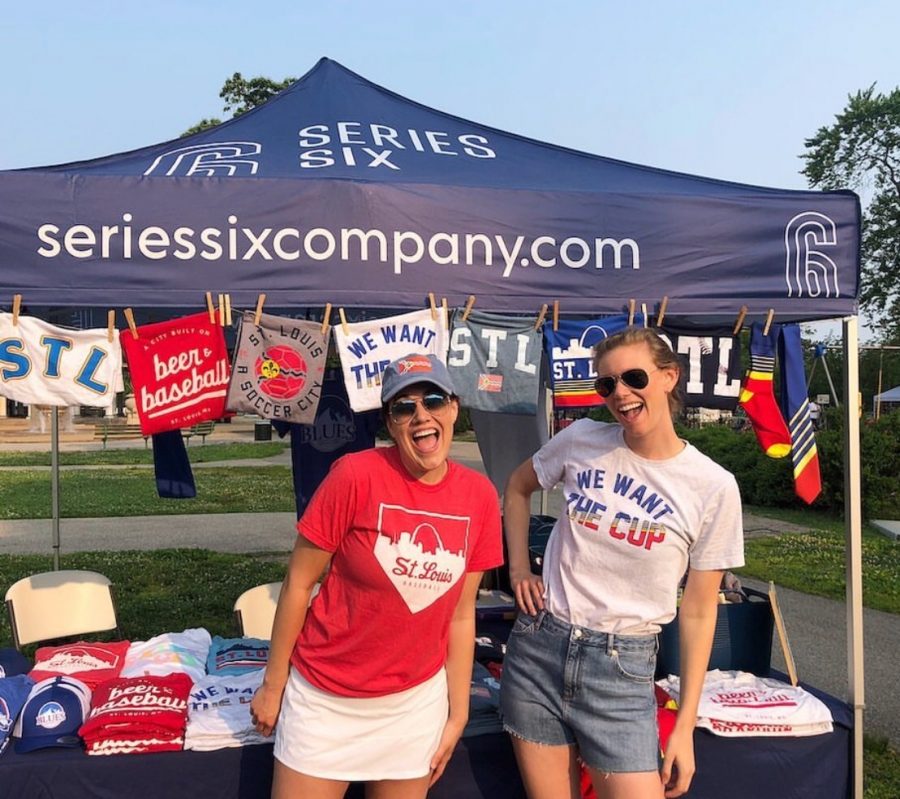 Take a drive through Forest Park, and you’ll see them. Walk down West Pine during passing period, and they’re there. They come up on Instagram, the Blues are wearing them and even your mom has started pointing them out. Shirts that only two years ago were just an idea, a design on a computer or a sketch in a notebook are suddenly everywhere you turn. Sami Maurer, founder and mastermind behind the St. Louis apparel company, Series Six, is just getting started.  As she just passed her two-year anniversary, we sat down to reflect on what brought her to where she is now, who she is and where she’s going.

Summer between sophomore and junior year of college in Spring Hill, Maurer found herself wanting a St. Louis Cardinals shirt that simply didn’t exist. Instead of giving up and settling for an already-made shirt, she decided to create what she envisioned. She designed a Cardinals shirt with a chevron pattern and ordered one unit, which is far more expensive than ordering something in bulk, she noted. It was literally an investment from day one. The dream of designing and selling shirts for everyone in the St. Louis community to enjoy wasn’t anything more than a thought. As she began wearing her custom-designed shirt around town, people started asking where they could buy one.

When Maurer returned to Spring Hill, she began thinking more seriously about her business. As a graphic design and business double major, she was able to tap into both sides of her education and create a business plan for Series Six as her senior presentation project, the first serious step in making her dream a business.

Series Six makes an appearance at almost every event the St. Louis area has to offer, making Maurer’s products accessible to just about everyone. Maurer focuses on creating apparel for everyone but keeps the college demographic in mind. With successful Mardi Gras and St. Patrick’s Day lines, she hopes to get even more college students into her apparel during the upcoming seasons.

One of the drawbacks, she notes, is working to make apparel that doesn’t infringe on copyright. When asked if she has any plans for making SLU-themed apparel, she noted that it’s harder than it may seem for small businesses to make partner and gain access to logos and fonts for large brands such as Saint Louis University, Washington University in St. Louis and the Cardinals.

The St. Louis Blues, however, fast-tracked the process and reached out to Maurer, setting up a meeting to partner and giving Maurer access to their logo, colors and other design choices that would align her brand with the Blues. “[It] shows how prominent my hockey-themed apparel has been” Maurer says, proudly.

Series Six’s partnership with the Blues is a testament to the relationship the company has given Maurer to the St. Louis community. “It’s been huge,” she confirms. Through event coordination, partnering with “cool people,” working with charities in the St. Louis area and exploring the many diverse communities in St. Louis, Maurer has been able to get to know the city as a vendor in a way that many large businesses don’t. “[It] feels like I’m making an impact on the city,” she notes.

Maurer recognizes that her success is thanks to a lot of hard work and careful planning during the beginning of her post-graduate life. Starting your own business from the ground up, especially in the creative world, can be a thankless job at times. “Design and art in general get a bad rap,” she says. “Kids need to realize that you can.”

Maurer notes that the creative side of her job reaches more than just the shirt designs themselves. The power of social media has changed the marketing landscape in the last 10 years, and the persistence to navigate this ever-changing platform for advertising takes increasingly more creative approaches as social media marketing gains traction. Maurer notes that she spends a significant amount of time on social media, whether it be planning what stories go up on what day, scheduling posts, looking at analytics or pushing sponsored content. It’s a larger part of the job than many anticipate and certainly makes this (nearly) one-woman show even more impressive.

Though, on paper, Series Six is somewhat of a solo expedition, Mauer has begun hiring college-aged interns to help with anything from photography to event management to marketing. “My experience at Series Six was amazing. It was a very open-ended internship, which allowed me to focus on the aspects that I enjoy most [like] marketing, design[and] advertising. It was also cool to work for a growing small business because I got to actually see the impact I had on the company,” said intern and junior SLU student Mike Gauvain. I was challenged in new ways by having to do photo shoots and deal with the post-Stanley Cup Blues craze. In addition, Mauer regularly employs the help of friends and family to run the many events Series Six makes an appearance at each weekend. Her team is small but mighty and has brought new dimensions to the company.

Mauer offers a striking example of entrepreneurship in practice and sympathizes with the struggles of college students wanting to get their own ideas off the ground. When asked to offer some advice to current college students with aspirations of starting their own companies, Mauer thoughtfully reflects and offers this:

Be patient. “It doesn’t happen overnight,” she says. It’s important to take baby steps. Focus on goals week by week and month by month.
Pushing through. Even when it’s hard, exhausting or just plain not fun, Mauer advises keeping the finish line in sight so someday you can “wake up liking what you do,” she adds.
Understand the power of social media. It’s an amazing resource that is free to use as a business. It’s not as negative as people think, especially when using it for a marketing perspective.

These days, during her downtime, Mauer can be found coaching high school girls volleyball, her first passion, checking out live music in St. Louis and going to sporting events. As her business grows, she’s able to find more of a balance in her everyday life, despite still working basically from sunup to sundown. Coaching the girls volleyball team at Cor Jesu, her alma mater, has been an especially valuable outlet for Mauer. It’s important to Mauer to “give to something else.”

That fated T-shirt sparked what is now a thriving local business that has gained Maurer the attention of many St. Louisans. After two and a half years of hard work, the benefits are clearly paying off. Maurer is focused on “not fixing what isn’t broken” in regards to her business. What’s clearly working for her is a list of weekly goals, trying to design every day, no set hours, having a high level of accountability for herself and, when she can, not setting an alarm. “Each day is different,” she remarks. “You never know what fires you’ll need to put out.”