Back to back women’s soccer A10 Champions 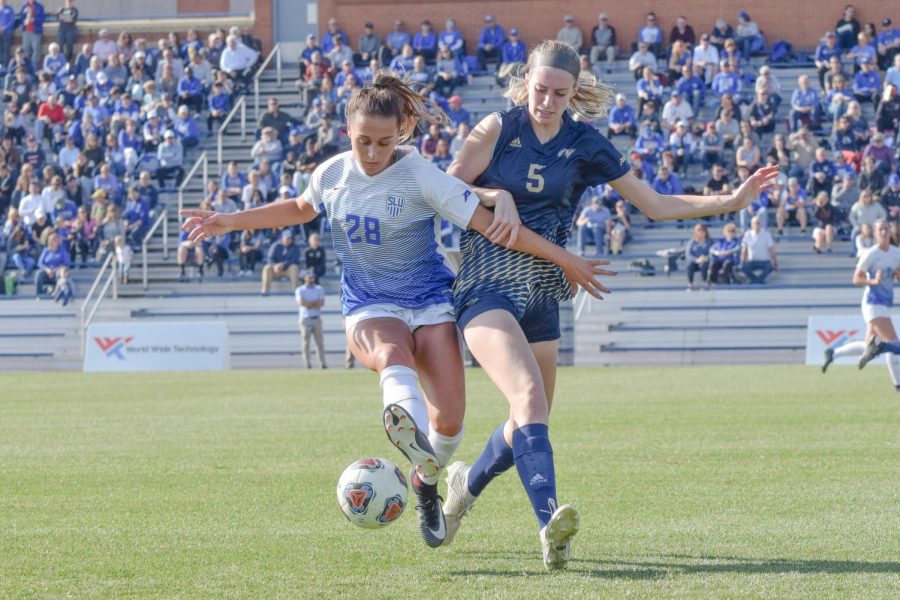 It may not rhyme, but it does accurately represent the firepower coming from the SLU women’s soccer team.

A 3-1 win over George Washinton makes the Bills back-to-back Atlantic 10 champions and grants them an automatic bid to the NCAA Tournament. A 5-0 win over Duquesne on Nov. 2 advanced the Bills to an Atlantic 10 semifinal on Friday where they played La Salle to a 1-0 win.

The A-10 Championship was held in St. Louis this year, making it a menacing atmosphere for any SLU opponent. “As seniors we made it one of our missions to make Hermann Stadium hard to play at,” said senior midfielder Courtney Reimer. And it has been one of the toughest venues with a home record of 37-1-5 in the last 43 home games.

Current SLU seniors have only ever witnessed one defeat at Hermann Stadium.

“It was nerve racking,” said SLUnatics Vice President of Gameday Operations Alex Smith, “as the game went on, the hype was getting wilder and as the second half started I could feel a championship trophy coming back to SLU!” At the end of 90 minutes, that feeling was real when screams broke out and a wave of blue and white swept across the field.

The Bills played a great attacking game tallying 24 shots in the match with 11 on goal. The three Billiken goals came from sophomore Hannah Friedrich on a penalty kick in the sixth minute. Senior Alli Klug struck in another PK after a hand ball was called. The final goal came from sophomore Emily Groark, her first of the season, off a Friedrich assist.

The A-10 All-Championship Team consisted of five SLU players: Mary Niehaus, Emma Farley, Friedrich, Reimer and Klug. The last two winning postseason accolades for A-10 Defensive Player of the Year and Midfielder of the Year, respectively.

The Bills are now headed to the NCAA tournament. Selections will be announced Monday, Nov. 11, at 3:30 p.m. The Billikens will host a watch party at Lorenzini’s Restaurant in Chaifetz Arena.