Men’s Basketball Looks to Returners for A-10 Championship Repeat 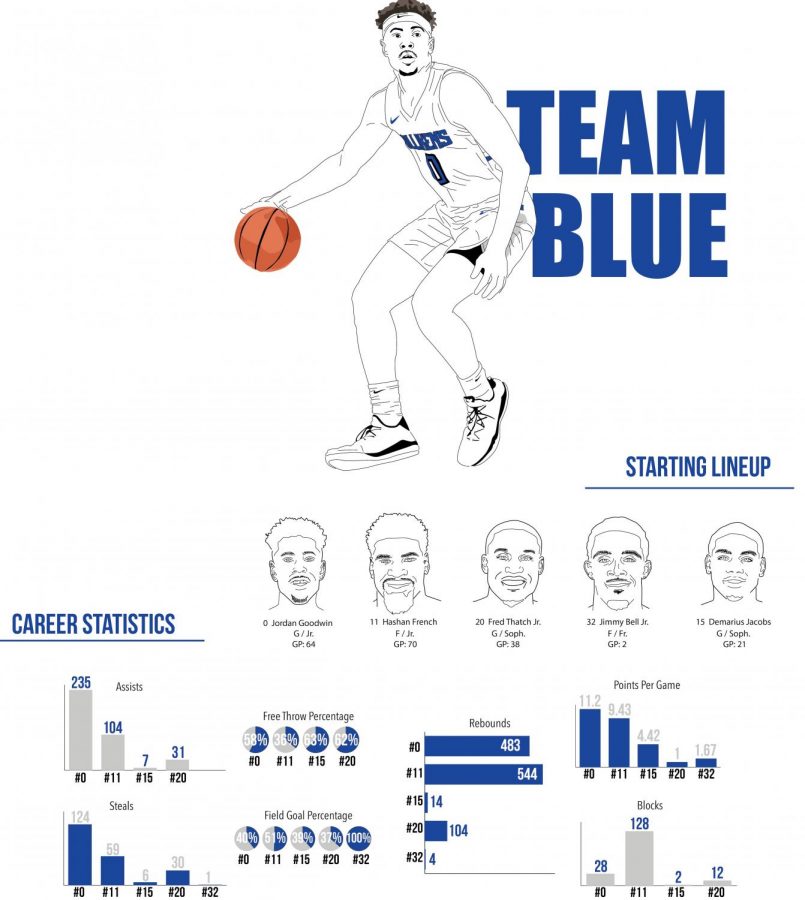 The Billikens were picked to finish 7th in the A-10 this season by the league’s coaches and media. With many new faces, the Billikens are like a penny stock—they could shoot up and be very successful, or they could spin their tires and stay in the middle of the pack.

The style of play will look different for the Billikens this year as they will employ a very deep bench, “possibly using 10 guys” head coach Travis Ford said. Ford anticipates pressing for the majority of contests in hopes of wearing down opponents. The Bills will also be a much better shooting team with newcomers Gibson Jimmerson, Yuri Collins and Tay Weaver capable of hitting shots. The team will still be defensively-minded, but they are much more talented at the offensive end than in the past.

Team Blue could struggle against the experienced teams on its schedule, but it would not be surprising to see Jordan Goodwin lifting another A-10 trophy come March. It is tough to count out the Billikens.

After losing key contributors to graduation from the 2018-2019 campaign, the Billikens welcome eight newcomers, including five freshmen to the roster. The team will be led by the familiar faces of juniors Hasahn French and Jordan Goodwin, both central pieces to the NCAA Tournament team. The most experienced Billikens will assume leadership roles.

Senior transfer, guard Tay Weaver is expected to contribute as a shooter and up-tempo guard. Returning underclassmen are led by the defensively poised Fred Thatch Jr. who looks to make the jump offensively and impact the game from the “2” guard spot. Guard Demarius Jacobs will be a significant player, using his length to affect the game at both ends. Sophomore forward KC Hankton will play a more significant role at the “4” for head coach Travis Ford and looks to blend his inside-out game in the offense.

Finally, the freshmen are Ford’s most talented and deepest class at SLU. Local point guard Yuri Collins will step in and run the Billiken offense. With great court vision and quickness, Collins is a potentially program-changing player. 6-foot-5-inch Gibson Jimmerson can impact the game with one shot. He has killer range and will leave Billiken fans fired up many times this season. Give him space, and he will sink a 3. NFL-body and post-player Jimmy Bell Jr. can dominate the block on both ends.

SLU’s non-conference schedule is filled with “resumé-builders.” Home games against Belmont, SIU and highly-ranked Seton Hall, a trip to Boston College, and neutral sites against Auburn and Kansas State provide many opportunities to bolster the “Selection-Sunday” resumé. In conference play, the Billikens hope to compete with the “Big Dogs” in VCU, Davidson and Dayton. The Bills only play top dogs VCU and Davidson once while having a home-and-home against Dayton. They travel to Davidson in January while hosting VCU on Feb. 21 and Dayton on Jan. 17.