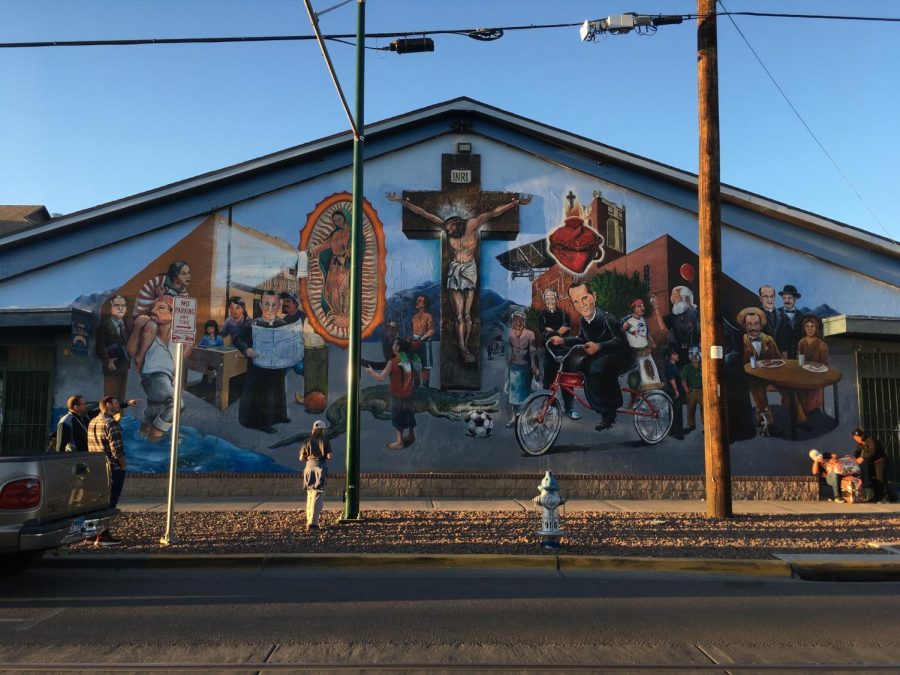 For the past twenty-two years, three dioceses of El Paso, Las Cruces and Ciudad Juarez—all situated around the U.S-Mexico border—have hosted an annual border mass in El Paso, Texas in a show of international unity, peace and solidarity.

This year, a contingent of SLU students and faculty, sponsored jointly by Campus Ministry and the Center for Service and Community Engagement, packed into two chartered buses to El Paso in order to experience firsthand the stunning display of solidarity that takes place at the border mass.

Leaving in the afternoon of Wednesday Oct. 30, the group spent nearly a day on the road, arriving in El Paso midday Thursday. The group spent two days in El Paso before the actual border mass, educating themselves on the issues that migrants and refugees face at and around the border through conversation and interaction with those whose ministry brings them face-to-face with the marginalized on a daily basis.

Kevin Khuel, S.J., a Jesuit scholastic currently studying philosophy at SLU, said it was this face-to-face encounter that that made the trip such a worthwhile experience. Khuel stressed that experiences with the “gritty realities of life” are the hallmark of a true Jesuit education, saying “part of a Jesuit education is the knowledge that comes with the encounter with people that are suffering and people that are on the margins. The classroom can lay the foundation but it is only in that physical encounter that our hearts start to be transformed.”

Bishop Mark Seitz of El Paso, an outspoken advocate for comprehensive immigration reform that affords migrants, refugees and asylum seekers the basic human dignity they deserve, delivered a presentation to the group that outlined the efforts of his diocese to minister to the marginalized individuals fleeing violence and seeking economic opportunities.

The group also spent time in one of the oldest neighborhoods in El Paso, El Segundo Barrio. Dubbed “the second Ellis island,” this neighborhood is home to the Sacred Heart parish, where the SLU contingent met Rafael Garcia, S.J., who spoke on his experiences with outreach and ministry efforts to migrants and refugees.

Throughout the trip, the group learned about the myriad ways that the El Paso diocese and El Paso’s sister city, Ciudad Juárez, have worked closely to minister to the marginalized migrants and refugees arriving at the border, engaging in cross-border dialogue and international solidarity in a refusal to be divided by a man-made border. As the El Paso Diocese said in their invitation to the border mass: “We are missionary disciples of Christ, that we are primarily called to live in communion. For our Catholic faith, there is no “us and them”, but one family of God.”

Saturday morning, hundreds of parishioners from both sides of the U.S-Mexico border gathered for mass. The mass was held in the middle of the Rio Grande canal near the Santa Fe Street Bridge, a bridge that connects El Paso and Ciudad Juarez.  A wooden bridge was constructed specifically for the event that connected both sides of the canal.

This year, the mass was held in honor and in memory of the migrants and refugees who have lost their lives on the journey to the border, often fleeing brutal violence and environmental and economic catastrophes. Those who have died in United States detention facilities and those children who have been separated from their families, and the 22 individuals murdered during the El Paso Walmart shooting three months ago, were also honored.

Those in attendance were especially struck by the sense of community and solidarity that accompanied the celebration of mass. Kevin Khuel emphasized the overwhelming atmosphere of the mass, stating: “A big takeaway was the sense of solidarity that came with the border mass itself. Coming together in that very unique space, right on the border, with the altar literally in the middle of the river that marks the border, as people from the US and Mexico that are divided by this man-made border were brought together as one … that’s an image I won’t soon forget.”

Bishop Peter Baldacchino of New Mexico and Bishop Guadalupe Torres of Ciudad Juarez joined Mark Seitz at the mass, urging those in attendance “to remember that they too are refugees who must open doors to others in need.” This message of unity and solidarity aimed to combat the divisive politics of fear and rhetoric of hate that often characterizes dialogue on the U.S-Mexico border.

The SLU contingent left El Paso soon after the mass concluded, spending another twenty hours on the bus before arriving back in St. Louis sunday afternoon. As students and faculty re-enter the SLU community, the hope is that they continue to draw on their experiences at the border for advocacy and educational work. Khuel said: “We have just had the experience of solidarity with a suffering humanity” asking, “Now, can we convert that into action for systemic change and put our voices, our power and our privilege to work for the good of other people?”