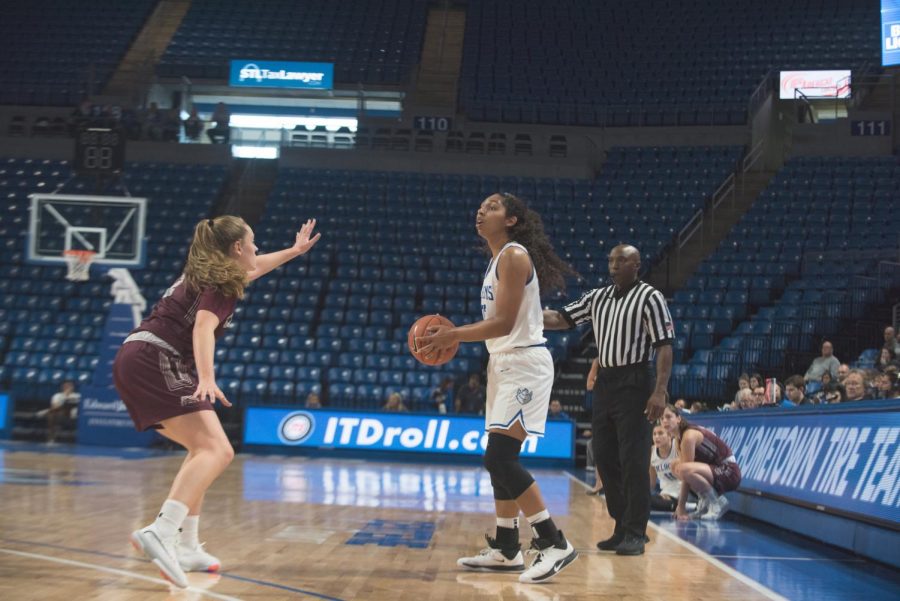 Coach Lisa Stone has continued to recruit well in her eighth season leading the women’s basketball team. From landing high-profile recruits like Jackie Kemph and Ciaja Harbison, to keeping local players like Brooke Flowers and Kendra Wilken close to home, Stone’s ability to land players who fit her program has been instrumental to the Billikens’ recent success. While Harbison was the A-10 rookie of the year for 2019, another newcomer is making an early case to keep that honor in St. Louis for the 2020 season. Freshman Rachel Kent has had a tremendous start to her Billiken career. The 5-foot-11 wing player from the Chicago suburbs has started every contest for the Billikens to this point while remaining on the floor an average of 35.5 minutes a game.

With a tough, defensive-minded philosophy,Stone expects her players to play fundamentally on both sides of the basketball.

Well-rounded players who make intelligent decisions excel in Stone’s system, and Kent checks all the boxes. She is not ultra-athletic, but Kent has a “nose for the ball” and plays excellent help-side defense, a must in the Pack-Line defense. Kent can guard one through four and is rarely overmatched defensively.

On the other end of the court, Kent’s stats speak for themselves. She is shooting 39 percent from the field and 45 percent from behind the arc. Her 13.1 points per game leads the Billikens while she also averages just under four rebounds and 2.25 assists. Kent is a key contributor to the team in all facets of the game.

Kent credits off-season workouts for giving her “a feel for the team and a feel for the pace of the game” to help with the transition to Division 1 basketball. Adapting to the faster pace of the college game, and performing well at the “3” guard spot that was long-filled by SLU’s all-time 3-point leader, Jordyn Frantz, is no small feat. Although, it has been easier due to a “next-play” mentality and “having teammates who are there for us.” remarked Kent. She credits those teammates for helping her maintain the necessary confidence throughout the ups and downs of a game.

Kent’s ability to shoot well from deep while being a threat off the dribble, not only proves fruitful for the physical therapy major, but it also takes defensive pressure away from the Billikens’ leading threat—Harbison.

Kent is a quality complement to Harbison’s dribble penetration and the respectable post threats of Wilken and Flowers. She allows for the offense to have at least three options to score every possession. Despite early success, she is still quick to assert areas that can be improved. “Finishing at the rim, ball-handling, and finding open teammates,” are just a few of the topics Kent mentioned. With a focus on those areas of improvement, it is exciting to think about the potential player Kent could become and the potential success the Billikens could have with pieces like Harbison, Flowers and Jaidah Stewart.

Every now and then, a player comes along that just fits a particular program. A “program-player” so to speak. Kent is that “program-player” Stone has been searching for, the epitome of the player needed for the program to excel. The soft-spoken, yet confident Freshman never takes a play off and rarely makes a bad decision, on or off the court.

The even-keeled Kent knows her role, and feels comfortable as a Billiken. “The coaches are true. They’re genuine.” stated Kent. She trusts the staff and her teammates, while those around her have much faith in the guard. The Billikens women’s basketball team and Rachel Kent are just a good match, “like peas and carrots,” as Forrest Gump would say.