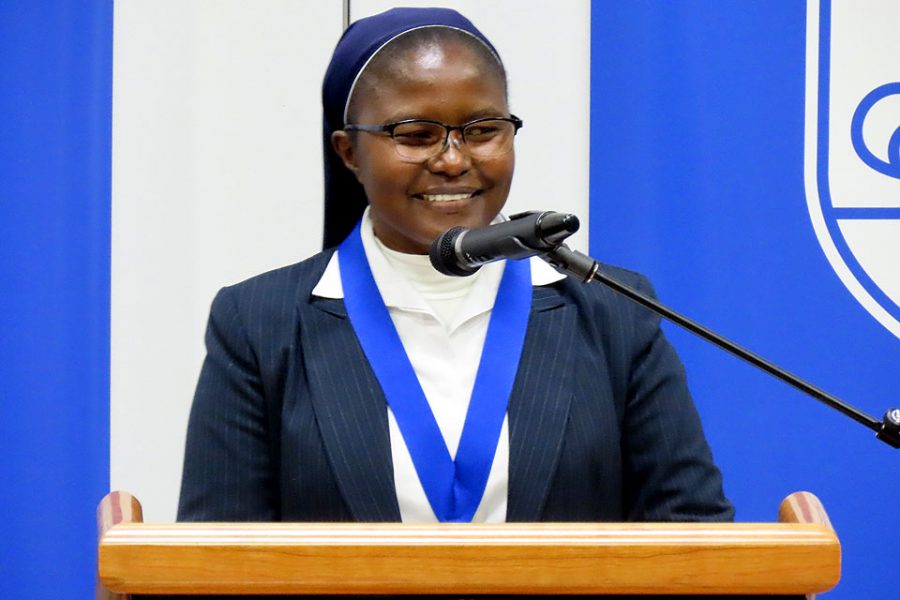 The Opus Prize is an annual award that rewards faith based humanitarian service and leadership, recognizing the “unsung heroes who are conquering the world’s most persistent social problems.” Each year, the Opus Prize Foundation coordinates search efforts that identify leaders and organizations striving to solve some of the world’s most pressing problems.

The Opus Prize Foundation partners with Catholic universities across the United States, who host the prize ceremony and also assist in research and evaluation capacities to pinpoint where the Prize money will be best utilized. Once SLU was chosen as the partner university, experts tasked with finding and researching potential candidates submitted nominations to a panel of jurors who were selected by SLU.

This year, three Opus Prize finalists traveled to St. Louis to share their missions with the SLU community in anticipation of the award ceremony. The three finalists were Michael Fernandez-Frey of Caras con Causa, Brother Charles Nuwagaba of the Bannakaroli Brothers of St. Charles Lwanga and Sister Catherine Mutindi of Bon Pasteur.

Mutindi, the 2019 Opus Laureate and recipient of the $1 million prize, is a member of Our Lady of Charity of the Good Shepherd, an international organization of religious women dedicated to providing ministry for vulnerable children denied basic human rights through exploitation and trafficking.

In 2012, Mutindi’s ministry took her to Kowlezi, a city in the south of the Democratic Republic of Congo (DRC). Kolwezi is an important mining center, containing materials that power the world’s digital devices, from smartphones to Tesla cars. Specifically, the DRC is home to the world’s largest cobalt deposits. Kolwlezi is at the center of this industry, their resources valued at $24 billion dollars.

Mutindi’s development program seeks to assist vulnerable groups in the mining communities of Kolwezi, specifically by strengthening child protection systems, increasing the accountability of mining companies, ensuring equitable distribution of resources and guaranteeing food security and steady income to families in the mining community. Bon Pasteurs vision is “an inclusive and democratic Congolese society where the rights of girls, women and children are respected, protected and promoted.”

Bon Pasteur’s theory of change, which has been recognized by local Congolese government officials as well as international entities like the UN and UNICEF as a “best practice initiative,” seeks to provide alternative and sustainable livelihoods outside of the mine. It particularly attempts to empower children in mining communities through education efforts and foster community cohesion that can act as a check on mining companies.

Fernandez-Frey and Nuwagaba each received $100,000 for their organizations. Fernandez-Frey is the founder and director of Caras con Causa, a non-governmental organization that works to alleviate poverty and improve living conditions for families in Puerto Rico, specifically the Cataño area and Guaynabo.

Fernandez-Frey and Caras con Causa pursue strategies for improvement include a variety of education and sustainability initiatives in pursuit of “a better future for Puerto Rico.” They are  committed to pursuing the empowerment of children through education, restoring the wetlands after the destruction of Hurricane Maria and organizing communities to protect themselves against the destruction of their homes by the government.

His work as director of a primary school in the Kibera slum serves 280 students and 260 young people and is heavily centered around vocational training. These vocational programs fight poverty by training individuals for success in diverse professions, including programs in “motor vehicle maintenance, hairdressing and beauty, hospitality and computer technology.”

The award ceremony, which was held in the Center for Global Citizenship, was broadcast nationally and gave each finalist a chance to address the SLU community. Each of the finalists ultimately fulfilled the Opus Prize Foundation’s commitment to challenge college students to think globally and live inspired lives of service.