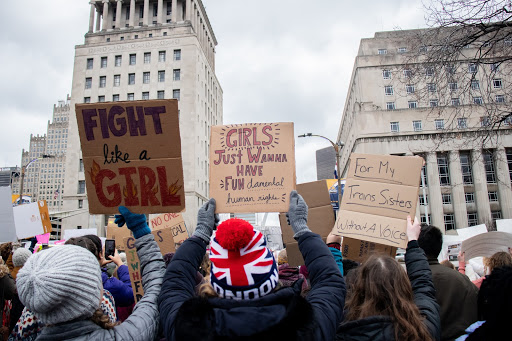 Despite the cold and windy day in St. Louis, thousands of determined protesters attended the fourth annual Women’s March this past Saturday. The theme of the march this year was “Be Counted” in an attempt to motivate more people to vote in the upcoming 2020 presidential election.

People of all different identities gathered on Market Street to hear inspiring speeches given by a diverse set of women. These speeches were especially significant because they addressed the idea of intersectionality and how not one identity can speak for all women. Along with reproductive rights, the march and speeches also focused on the issues of immigration and climate change. Women were interviewed prior to the event about what topics mattered most to them, and those three emerged.

After the speeches came to an end, the march through Market Street and down to the St. Louis Arch began. The overall unity throughout this event was incredibly empowering. Protestors made their presence clear as a chanting sea of pink that could be seen a mile away. “We are here and we are not going to back down,” the crowd chanted.

Additionally, the signs seen throughout the march were just as diverse as the people. From humor to boldness, the signs were a big representation of the change this march was trying to enact. “I just took a DNA test and turns out I’m 100 percent capable of making my own decisions about my own body,” one of the signs read. This was referencing the song “Truth Hurts” by popular artist Lizzo.

After years of seeing so much hate on the news, it was extremely encouraging to see so much love in person. People of all different identities were connected with the purpose of inspiring change. There was a different energy to this women’s march compared to past events. People were adamant and determined to get their messages across, seeing as this year’s election is extremely important for everyone.

Overall, the experience of the 2020 Women’s March was almost indescribable. From the start to the end, this event stirred up many emotions for everyone.

“I felt really emotional seeing a lot of women of different identities and also men coming together for this one cause,” student Melissa Holland said.