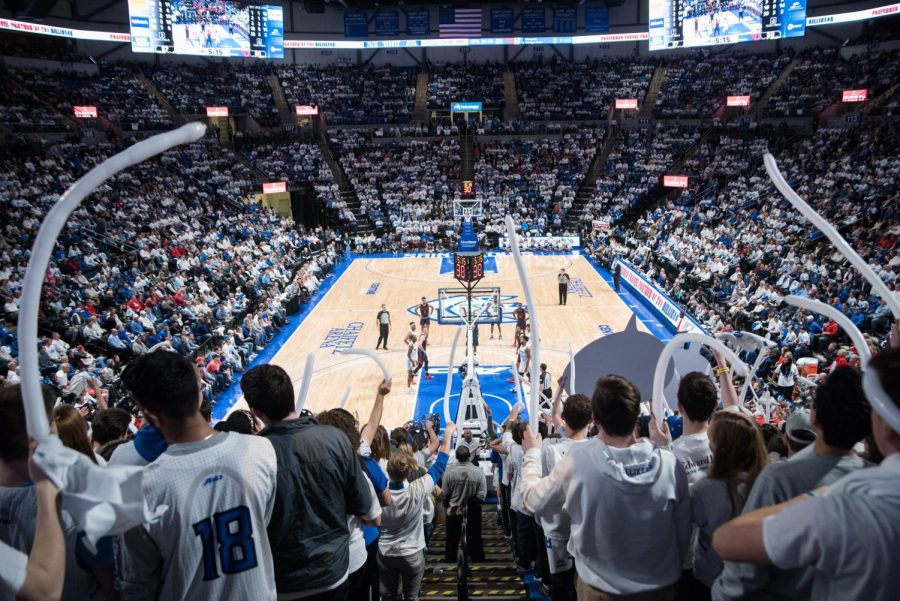 Friday’s game showed an even match-up between SLU and Dayton, who was ranked No. 13 prior to the contest and No. 7 in the latest AP Poll. Dayton’s 16-2 record and SLU’s 14-4 record promised a close and intense game. This promise inspired SLU students to line up early in the morning at various locations on campus, in the hope of receiving a ticket. The 1,000 tickets set aside for students were “sold-out” before noon.

SLU students showed up in full force to support the Billikens on the basketball court, with a sea of white consuming Chaifetz Arena. Billiken fans overwhelmed the stadium with blaring support for the players, and equally boisterous distaste for Dayton. Part of the energy of the evening was attributed to the shaking bleachers in the SLU student section, spearheaded by Chaifetz Arena emcee and SLU Basketball alum, Andre Craig, or to Billiken fans, Dre.

“The atmosphere was tense, but also excited and confident. Every time we scored the whole place erupted into cheers. It was crazy,” recounts Joe Solaro, a junior SLU student. The contest against Dayton was the first SLU basketball game Solaro had ever attended.

This excitement and energy of the students was fortified by the Billikens’ incredible performance on the court. SLU dominated throughout the game by a significant point margin, and only in the last eight minutes of the second half did Dayton begin to pose a threat. However, junior Jordan Goodwin took the Billikens to overtime with a buzzer-beating layup to tie the game at the end of regulation.

“It was the best basketball environment I’ve ever been in. As a competitor, it’s those kinds of moments and games that make the game of basketball so fun and enjoyable,” said freshman guard Gibson Jimerson.

Overtime saw an anxious back and forth competition and an equally anxious crowd. With only six seconds left in overtime, freshman Yuri Collins made two free throws, giving the Bills a 76-75 lead. Dayton was able to respond with a strong offensive push and a three from Jalen Crutcher, resulting in a 76-78 loss for SLU. Crutcher hit his shot with only 0.1 second left in overtime, a feat Billiken fans were equally amazed and upset by. The game truly came down to the wire, and Dayton was able to pull it off.

Despite the loss, Billiken spirit was at an all time high. Each member of the crowd received a free t-shirt and rally towel, with many fans donning the t-shirts as soon as they reached their seats. Nearly the entire crowd could be seen wearing white in support of the Billikens.

Though SLU was unable to come out on top, the Billikens certainly put up a strong fight. Friday’s game provided great hope for what the rest of the season will hold, both on and off the court. This year’s team and fans promise an exciting season full of spirit, support and great basketball.