Homemade Pasta: Worth the Effort 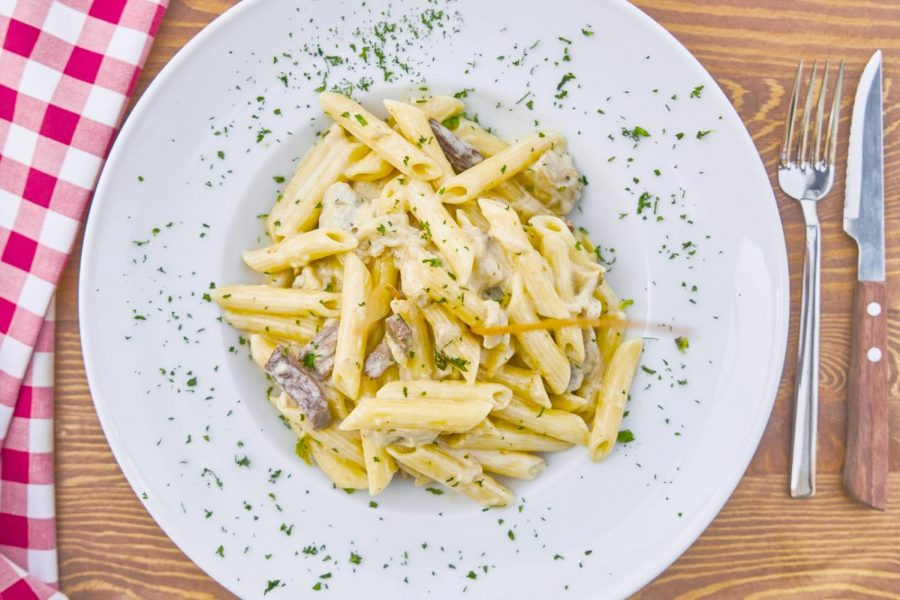 One of my favorite books growing up was “Strega Nona,” the story of an Italian witch who owns a magic pasta-making cauldron. Only the “strega”—the Italian word for witch—has the ability to use the magic cauldron. This is a lesson that her helper, Big Anthony, learns too well when he tries to make pasta and ends up flooding the town with fettuccini.

I’ve always been a Big Anthony in the kitchen. Even this last holiday season, I tried to make peanut clusters without my mom’s supervision and  burnt the chocolate to create bitter ashy peanut blobs. But one thing my grandma gave me for Christmas was a cookbook. I had asked for it because I wanted to become a strega in the kitchen rather than a Big Anthony.

While the lack of an oven or a stove in the Fusz kitchen has limited my cooking opportunities, I have a friend who was more than happy to show me how to make pasta from scratch. Using her kitchen, we were able to create a dinner of farfalle (bowties) and linguini (thick spaghetti). Here’s how we did it:

Mix! We were able to do the iconic egg-in-a-pile-of-flour technique that is seen in the movies! After creating a bowl shape with our flour, we filled it with egg. Through mixing, we slowly incorporated the flour, and over time, the flour bowl disappeared. By the time the flour was all incorporated, we had a large moist blob of dough.
Rest! We wrapped the dough in plastic wrap and let it sit for around 20 minutes. This let the dough thicken and strengthen for the next step. We made a salad during the wait so that we’d have an appetizer.
Roll! This is the fun part, but it also required the most work. My friend told me that the dough should be “thin enough to read a newspaper through,” which seemed a little ambitious to me at first since it’s, like, dough. But we did it! If your wooden rolling pin malfunctions like ours did, feel free to use a glass bottle. And use plenty of flour throughout the rolling process.
Cut! This was also a fun part because it’s when the pasta actually forms. Once your dough is rolled all the way out use a sharp knife to cut the pasta. To make farfalle, cut out squares and use your thumb, index finger and middle finger to cinch the middle of the square. To make linguini, just cut in long straight lines.
Boil! It may seem weird to put raw dough in boiling water, but the fresh dough actually allows it to have a cook time of about three minutes (at least with our recipe). To know when it’s done, take a piece out and bite it. If it has a noodle texture on the outside but it’s still doughy on the inside, then you have cooked it to “al dente,” which is the perfect amount of cooking for pasta. I am still not an expert on how to sense this just by biting it, but my friend who has made this multiple times has the hang of it. Must be a strega thing…
Eat! Now this is by far the most fun part. We happened to make a homemade pesto sauce, but if you don’t do that, then store bought is fine as well.

Every recipe has its own unique additions to this process (ours called for a special type of flour), but I think the general process is just as interesting to learn. I am still by no means a Strega Nona in the kitchen. But, thankfully, I was still able to witness a magic pasta cauldron (kind of) in the company of friends. And that, I will say, was the most fun of all.