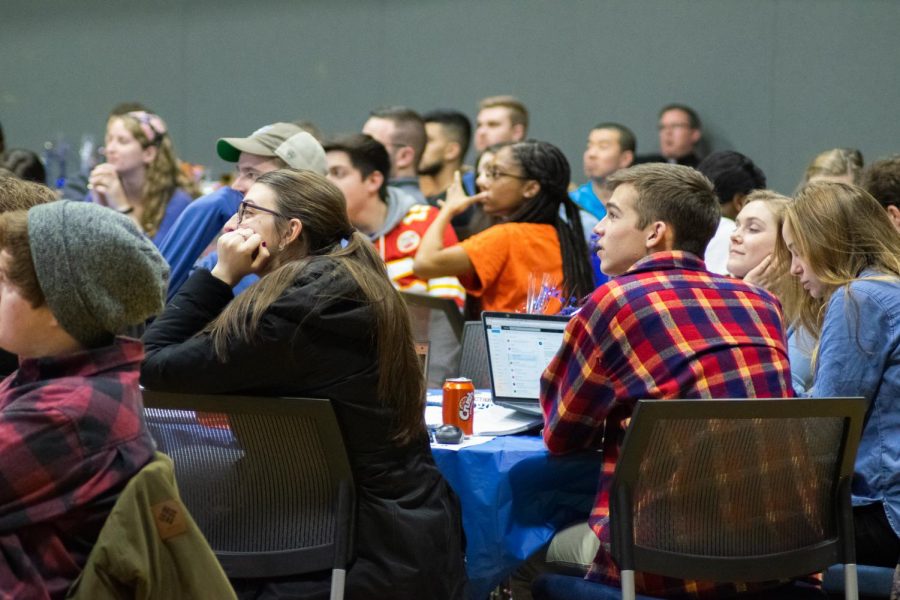 On Monday night, over 150 SLU students gathered at the CGC for the watch party of an Iowa Caucus that announced no official winner. The app used by the Iowa Democratic Party to relay numbers from precinct chairs malfunctioned, with none of the vote reported throughout the night. The app was coded by a tech firm run by former members of Hillary Clinton’s 2016 presidential campaign, known as Shadow Inc.

SLU’s Political Science Department with help from the Political Round Table and the Center for Service and Community Engagement was in charge of organizing the watch party. Steven Rogers, Ph.D., was the lead organizer for the event and has held that position since SLU’s first watch party in 2016. Along with the Iowa Caucus, SLU will be hosting watch parties at the CGC for the New Hampshire primary on Feb. 11 and Super Tuesday on Mar. 3.

“Our events provide the SLU community a central place to discuss politics and learn about the American electoral process,” said Rogers in regard to the central aim of the SLU watch parties. Rogers also hoped that these events will spark more interest in politics for many students and inspire them to “become politically involved on-campus.”

The event ran smoothly with a live feed of CNN’s election feed on the big screen in the CGC along with tables and bleachers for students to sit and watch the night’s events unfold. There was a food table in the back with free pizza, snacks and drinks along with various activities for students to participate in at their tables as they watched the election results. The event kicked off with Rogers giving a presentation on theories about elections and public opinion before turning back to the CNN feed for the remainder of the night.

SLU students with differing political opinions and backgrounds all gathered together on Monday night to watch the events of the Iowa Caucus unfold. SLU’s College Democrats and College Republicans each set up tables to talk to students and watch the election along with various other university-based political and advocacy organizations. There were supporters in attendance for all of the leading candidates in the field, including Bernie Sanders, Elizabeth Warren, Pete Buttigieg, Joe Biden and Amy Klobuchar.

David Miller, a sophomore Klobuchar supporter, said that he looked for a candidate who “wouldn’t restrict markets” and “allow for social welfare programs” without having socially conservative positions. Klobuchar is the senior U.S. Senator from Minnesota who is a part of the moderate wing of the Democratic field, along with former former Vice President Joe Biden and former South Bend, Indiana, mayor Pete Buttigieg.

Sophomore voter Mccaully Bauer said she would support a candidate who was “pro-immigration” and who would establish “social and healthcare reform.” While undecided, Bauer states that what our country currently has in place “should be radically different” and explained that she leans towards candidates Sanders and Warren.

Sanders and Warren comprise the progressive wing of the Democratic field and propose more expansive social and economic policies. Sanders, senior Senator from Vermont, most differs from Warren, senior Senator from Massachusetts, based on his entirely grassroots campaign and his more comprehensive policy positions on Medicare for All, universal suffrage and free college/student debt cancellation.

Senior Brett Jones, on the other hand, said he supports Sanders mainly for his policy positions. Jones asserted that Sanders is the “only candidate that supports Medicare for All unequivocally.” Jones also agreed with Sanders’ position on universal suffrage (voting rights for all), along with him being the only candidate who supports Palestine and does not take super PAC money. The general sentiment among SLU students in attendance was that they expected Bernie, Biden or Warren to win in Iowa that night.

As the night wore on without any results coming in, the crowd of over 150 students progressively started to dwindle. Many students started to grow impatient that nothing was happening and left the watch party within a few hours. By the time the clock hit 10, there were only around 20 students scattered around the CGC. The watch party ended without anyone knowing the winner of the Iowa Caucus.