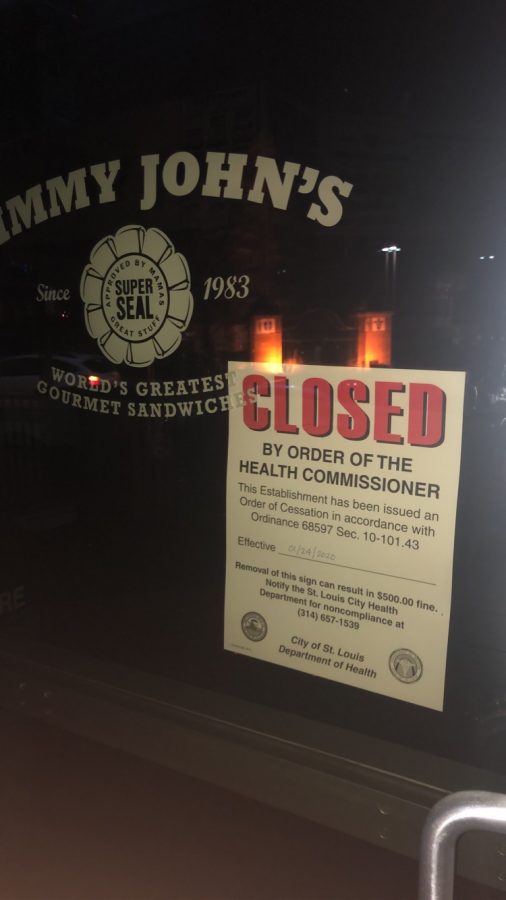 Reports of food poisoning have arisen from multiple SLU students after eating at the Jimmy John’s on Laclede Avenue. This was accompanied by a closure of the establishment by the St. Louis City Health Department.

Jimmy John’s, the sandwich shop located on Laclede Avenue across from the Vandeventer soccer fields, is one of the few off-campus dining options for SLU students within walking distance. That is, until multiple students became ill shortly after eating at the sandwich shop, some even being hospitalized.

“I will never eat Jimmy John’s again in my life,” says Nandini Fonseca, a sophomore international business student. Fonseca claims to have gotten sick on Jan. 19, the day after eating a Jimmy John’s tuna sandwich.

Fonseca fell ill after attending a campus retreat for a SLU organization that was catered by Jimmy John’s. Following the retreat, Fonseca claims she “couldn’t even open a gatorade bottle.”

This account is similar to fourteen other students who attended the retreat, such as Baker Mitchell, a junior business student. “From 7 p.m. on Sunday until about 11:30 p.m. on Sunday I threw up twelve times,” claims Mitchell.

Eventually, Mitchell’s roommate had to take him to the emergency room, and he was hospitalized on the evening of Jan. 19 along with another student who attended the retreat.

One week later, during the weekend of Jan. 25, the Jimmy John’s on Laclede Avenue was shut down. A City of St. Louis Health Department sign was soon posted on the door claiming an “Order of Cessation” for the restaurant.

The Health Department sign was soon taken down that weekend and replaced with a Jimmy John’s sign, this one apologizing for being closed due to a “water main break.”

However, Kim Vanden Berg, Public Information Officer for the Department of Health, stated that the restaurant was closed because they “received complaints of persons experiencing gastrointestinal illness following dining from the establishment.” The City Health Department says that Jimmy John’s was able to reopen “after it was determined there was no risk to the public.”

With the “water main break” now fixed and all students from the retreat now healthy, it is unlikely that the SLU community will know what exactly caused the illness.