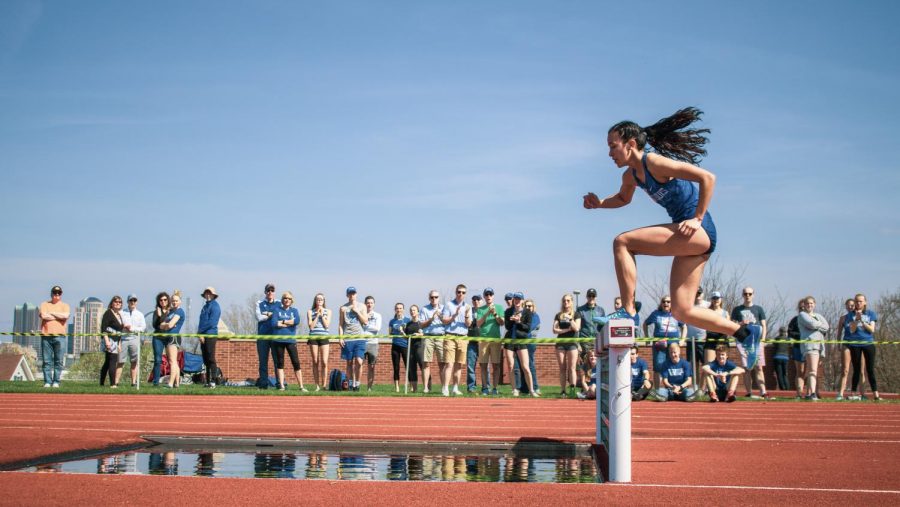 If given the hypothetical opportunity to go back in time and give her 8-year-old self advice for the future, junior Megan Ng would make sure that she proclaimed the following, “Continue to put in the hard work and long hours even if you feel like you are not having immediate progress; nothing is a waste of time.” Nowadays, Ng has little time to waste as a physical therapy major with a double minor in spanish and sports business on top of being an athlete for the Billiken Track and Cross Country teams.

Most students would consider obtaining a PT degree and competing as a Division I runner enough to float their boat, but the ambitious Ng chooses to maximize her time as a SLU student-athlete. She holds leadership positions in four organizations and is completing two minors. Ng is the Co-chair for the Mental Health and Wellness Commission, on the Student Athlete Advisory Council (SAAC), the Vice President of Philanthropy for Students Today, Alumni Tomorrow (STAT), she leads the Junior PT class as a student representative and liaison to Doisy College administration and she is the Vice President of SLU’s Doctors Without Borders. Ng excels in the classroom, on the course, and in all aspects of life. She is a well-rounded individual who makes a positive impact in the SLU community and beyond.

While most college athletes choose their school based on their sport prospects, the well-rounded Ng decided to focus her post-secondary choice based on academics and extracurricular programs, not her athletic abilities. Running in college was not her first priority. After choosing SLU’s direct-admit physical therapy program and arriving on campus in August of 2017, Ng reached out to former distance coach Tim Bradley to join the women’s team. Quickly, Ng was on the course and running in meets with the cross-country team a few weeks later. Ever since, the walk-on has been a dedicated member of the team putting in long hours running and lifting, spending time in the training room to recover, and making sure her diet is where it needs to be. She is the epitome of a great teammate and model student-athlete.

Ng stands out not because of her accomplishments or her LinkedIn profile, but because of her desire for those around her to succeed is the cream of her skill set. She thrives on seeing her teammates, classmates and friends do well in all of their endeavors. Her activities are permeated with her desire to help others become the best version of themselves. A simple question about her favorite running memory revealed Ng’s true passion. She stated, “I just really like watching my teammates succeed in what they do. It brings me a different type of happiness. It makes me happier than when I do well,” she said enthusiastically.

Ng is a person who leads in her own way. She finds ways to make a difference in many people’s lives while doing so with joy and exuberance. She is someone you want on your team, and she is a role model for today’s youth. She puts her heart into everything she does whether that is in school, running, student organizations or something else.

As a humble role-model, Ng was asked to give advice to young girls today who could be in her shoes. Ng’s response seemed to not only apply to young girls, but those of any age. Ng’s opinion on the mindsets of girls is to, “not be afraid to try hard in what you do. Don’t be afraid to put your best foot forward. Don’t be afraid of being judged because you’re a girl. Be proud of what you can do.” Ng has much to be proud of. She is the epitome of a true student-athlete, and she is a winner in all that she does.

Ng and the rest of the Billiken track team will be in action at the Medical Center Track the weekend of April 3-4for the Billiken Invitational. She is excited to get back outside and kick off the outdoor season with fresh air in late March at the Bill Cornell Spring Classic at SIU March 20. The Indoor track season and A-10 championships will wrap up at the end of February before the Billiken runners head outdoors.