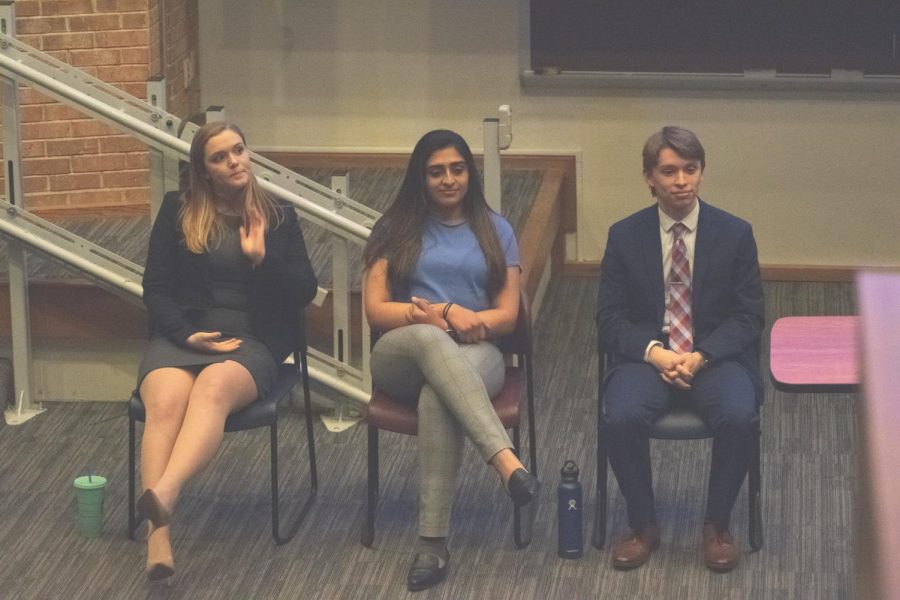 On Feb. 18, the 2020 SGA Presidential and Vice-Presidential Debate was hosted at Carlo Auditorium. The candidates took time to outline the issues central to their respective campaigns and why they are worthy of votes from SLU students. While there was only one candidate running for three of the five positions, the President and Vice President of Academic Affairs positions had at least two candidates running against each other for the vote.

The candidates for SGA President were first up to the podium. The three candidates debating were Alhan Sayyed, Joseph Reznikov and Maggie Kenney.

Sayyed is a junior who currently serves as the Vice President of Finance for SGA. Sayyad touted her experience in SGA since enrolling at SLU as her main qualification for the job. One of Sayyed’s main goals is to “destigmatize SGA on campus” and to make it a more welcoming place where all students can get involved. Next year, Sayyed would look to “incorporate non-SGA affiliated students on university committees” so that more students can have their voices heard. As president, Sayyed wants to be “a voice and resource for students.”

Reznikov is a junior who, as part of his platform, wants SLU to be “more equitable, more transparent, more engaged with our St. Louis community and more mission inspired.” He has been involved in SGA since his freshman year at SLU, with the majority of his commitments on the Academic Affairs. “I’ve really enjoyed collaborating with the administrators, students, faculty and staff in these roles,” stated Reznikov. Through various leadership positions he has held at SLU, Reznikov believes he has engaged with SLU’s Jesuit Mission in “a real and intentional way” and looks forward to using his experiences “both inside and outside SGA to positively impact the student body.”

Kenney is a junior who has served as a Chartered Student Organization (CSO) leader the past three years. She believes that her experience in leadership roles working with SGA, the Student Involvement Center and other administrators has given her a clear idea of the changes needed to be made and has also given her “relatable insight into what students are feeling and thinking about their roles on campus.” Kenney said she is passionate about “making sure that SGA’s mission to be a resource and voice for all students is truly fulfilled by our members.” Kenney pointed to the efforts made by her campaign to reach out to every student organization on campus, ensuring “that every voice is heard.” She also stressed the importance of providing student organization leaders with the resources needed to be successful. As SGA President, Kenney wants to make sure that the Jesuit mission is emulated inside and outside the classroom “in a completely holistic sense” and to embrace student diversity on campus.

After making opening statements, the candidates answered questions submitted by the Election Commission and SLU students.

When asked about the role of the SGA president on campus, Reznikov said he envisions the president as a “visionary” who, along with the cabinet and senators, would create a culture informed by SLU’s Jesuit Mission.

Kenney stated how as President she would want to encourage an inclusive, innovative environment where students “develop academically.” She also pointed to how she wanted to put an emphasis on students’ physical and mental health, which would help create this environment of academic success.

Sayyed elaborated on her desire for a more welcoming and equitable campus, especially for students from underrepresented backgrounds. She stated how SLU has had some problems with “diversity bubbles” within and around the university’s community. As president, Sayyed said she would work to break down barriers between groups at SLU and between students and the St. Louis area in general.

The only other contested position was for the role of Vice President of Academic Affairs, with Faith Nixon and Sophia Izhar debating.

Nixon is a sophomore who has held many leadership positions at SLU and currently serves as a committee chair on the Food Advisory Board. Nixon stated that her campaign is about “equity and inclusion.” She emphasized her campaign’s focus “on faculty involvement and development.” Nixon also pointed to the importance of providing more academic resources for students, particularly undergraduates. She put an emphasis on wanting to focus more on the arts and humanities at SLU as she believes that the university is “slowly focusing more and more on STEM.”

Izhar is a sophomore running on Sayyed’s ticket who has served as a senator for the College of Arts and Sciences and has sat on the Academic Affairs Committee. Through her service in various leadership roles, Izhar said she has been able to see how SLU functions in an academic setting. One of the stated goals of her campaign is “making sure there is representation of marginalized identities” on all university committees. Additionally, Izhar touched on how she wanted to centralize various student resources in one location so that they are more easily accessible for SLU students.

After Nixon and Izhar finished their debate, some candidates for uncontested VP positions went up to the podium to discuss their platforms. This included Armina Osmanovic (Vice President of Finance), Helena Cooper (Vice President of Communication and Internal Affairs), and Nandhineswari “Eshu” Senthikumaran (Vice President of Diversity & Inclusion).

Voting day for the SGA Elections will be held on Tuesday, Feb. 25. Polls open at 6 a.m., and there will be polling stations available around campus that can be accessed through SLU Groups.

Correction: The SGA presidential candidate Alhan Sayyed’s name was misspelled in an earlier version of this story. The University News regrets the error.