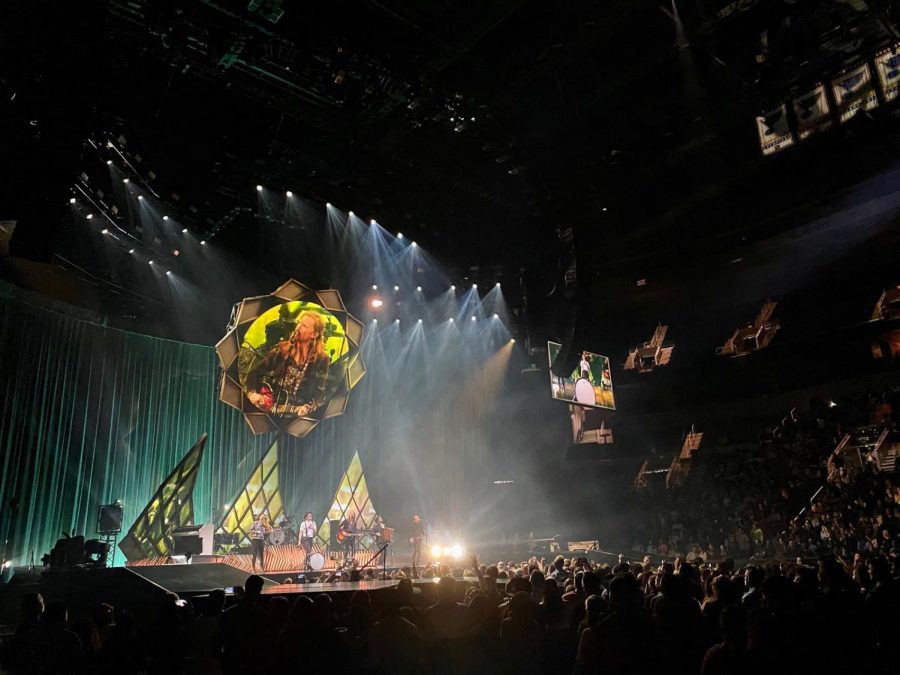 Thousands of fans poured in to the Enterprise Center in downtown St. Louis on Wednesday, Feb. 5 for a night of sing-along with the American folk band, The Lumineers. They played an impressive 23 songs that included works from each of their three studio albums, “The Lumineers,” “Cleopatra” and “III.”

The two opening acts, J.S. Ondara and Mt. Joy, gave the audience a friendly warm-up to the show. J.S. Ondara used a variety of string instruments in his performance, which blended effortlessly with his soulful voice and spiritual music. His set felt very intimate and personal, despite being delivered to thousands of people.

Mt. Joy, a slightly more well-known band, played the crowd favorite “Silver Lining,” as well as an “Ain’t No Sunshine” cover the crowd sang along to. They had an exciting use of lighting that made the crowd feel like they were a part of the show.

The Lumineers opened with a hit from their sophomore album “Cleopatra” called “Sleep on the Floor,” followed by “Flowers In Your Hair.” The band was able to play so many songs during their set because many of their tracks are under three minutes. They dressed up their usual sound with lighting and a stage that allowed them to interact with fans more intimately, yet the core of their music remained without the frills. The band stood on stage, playing different instruments at times, displaying their talent and often just strumming a banjo at the edge of the stage, singing directly to the crowd.

Their music follows the story of a family through all of their ups and downs, and their music videos reflect the same storyline. Multiple screens behind the stage showed clips of their music videos playing alongside the music. This visual element really added a new dimension to the show, giving the audience more ways to interact with the music.

The crowd livened during “Angela,” where he walked through the crowd, closing the gap between performer and audience that is common for most shows. Other hits such as “Cleopatra,” “Ophelia” and “Stubborn Love” had the audience grooving along with the band, and the arena felt like a warm community.