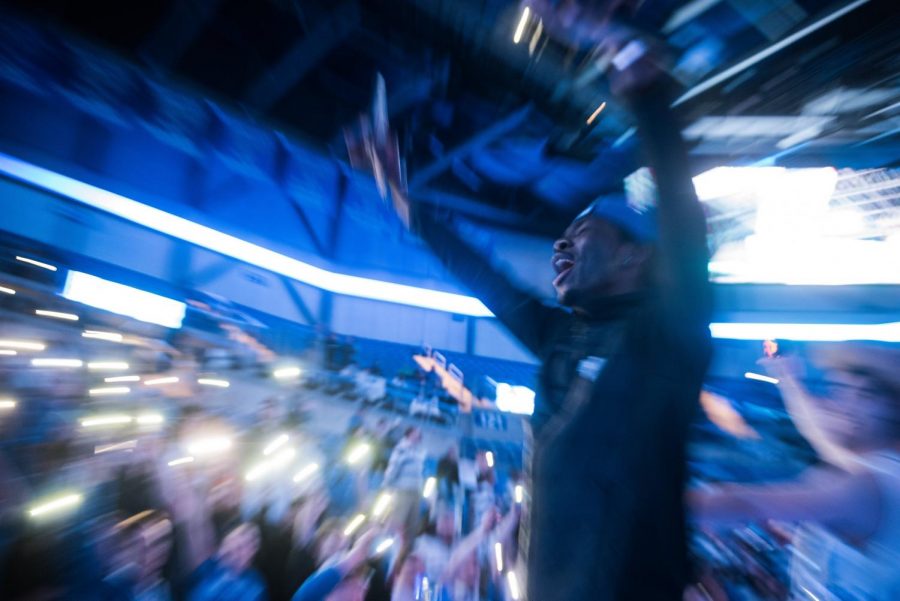 February 27: I received a phone call early in the evening. “What are you doing for spring break?” Obviously, I had no plans for my senior year spring break. “Do you want to go to Brooklyn for the A-10 tournament?” It. Was. On.

February 28: SLUnatics received a message from Athletic Director Chris May:

Thank you for doing a great job as a SLUnatic this season in Chaifetz Arena! You bring fantastic energy to Billiken games. As an appreciation for the incredible support you provided all year, the SLU Athletic Department is organizing a trip to Brooklyn for 20 SLUnatics as the Billikens go for back-to-back titles. We look forward to your energy as part of Team Blue!

I put my name into the drawing with high hopes for Brooklyn. I would not hear any updates for another four days. My life was in a stasis. I awaited my fate.

March 3: I sat in my statistics course right next to fellow SLUnatic Chandler Beck.  A notification popped up on my computer: “Congratulations! You Are Headed to Brooklyn!” My face lit up. “…you have been selected to attend the 2020 Atlantic 10 Men’s Basketball Tournament! You are headed to Brooklyn on March 11, 2020 to help support the Billikens go for back-to-back titles,” the message continued. I turned to Chandler who was reading the same email. I couldn’t contain my excitement. The next week would be filled with sharing the news and preparing to cheer on Team Blue in New York.

As the day carried on, we began to discover the other golden ticket winners. I made my way to the women’s basketball game that evening. Some SLUnatics were in attendance, including half of the group which would be heading to the A-10 tournament. It was invigorating to see the support. The evening culminated in a special “Shots for Cash” victory from myself and a hard fought victory for the Billikens against George Mason.

March 4: Wednesday moseyed on as usual until a meeting in Chiafetz Arena to discuss logistics about the trip to New York. Here, David Young and Brent Gallhager shared when and where we would be for this trip. As a group of SLUnatics, we discussed ways to bring the noise, energy and hype to the Barclays Arena. The excitement was evident. While anyone would be excited for a trip to New York, this group of students was more excited to get to see the Billikens back in action.

March 9: A message arrived in my inbox late in the afternoon: “We also wanted to check-in with you due to the heightened awareness of the coronavirus, to confirm your plans on attending the tournament still.” I had no qualms of the virus. “Wouldn’t miss it,” I responded.

17:37 – I received a text from my dad urging me to stay home. I tried to ease his worries by explaining that I was unlikely to get infected or to be impacted by the virus. I reassured him that I would take proper precautions upon return to prevent any spread if I were to have contracted the virus. Brooklyn was a GO!

18:56 – A message from the President’s Office goes out informing the students that there would be a suspension of in-person courses following spring break and that all non-essential SLU-sponsored travel would be restricted. A frenzy ensued. Twenty eager students awaited official confirmation of the trip.

19:27 – “At this time the trip is still happening as scheduled.” The message from Young filled our hearts with hope. We felt as if this was the right decision. We genuinely viewed ourselves as essential for the success of the team.

I awoke to a sack of bricks hitting my face. The sack read, “Good Morning All, So sorry to inform you, this morning the decision [has been made] to cancel the trip out of concern of everyone’s health and safety.” With less than two hours before departure, my dreams had been crushed. A group of SLUnatics proceeded to a local breakfast restaurant to grapple with the situation.

Upon return, several SLUnatics were interviewed about the recent developments with the trip to New York. We continued to look forward to following the A-10 tournament play from afar. We even got the chance to make it to one of the softball team’s games.

As the day progressed, more news would continue to come out surrounding COVID-19. Little by little, fans were restricted from games. Games were cancelled. Tournaments were cancelled. Seasons were ended.

By the time I had woken up, the A-10 tournament had been cancelled. Team Blue was headed home (their homes, not campus—coronavirus and all). By the afternoon, we had received another notification from the university suspending in-person courses until April 30. By the time I sat down for dinner, the NCAA had cancelled March Madness and the remainder of the seasons for our spring competitors. COVID-19 had been crowned the victor.