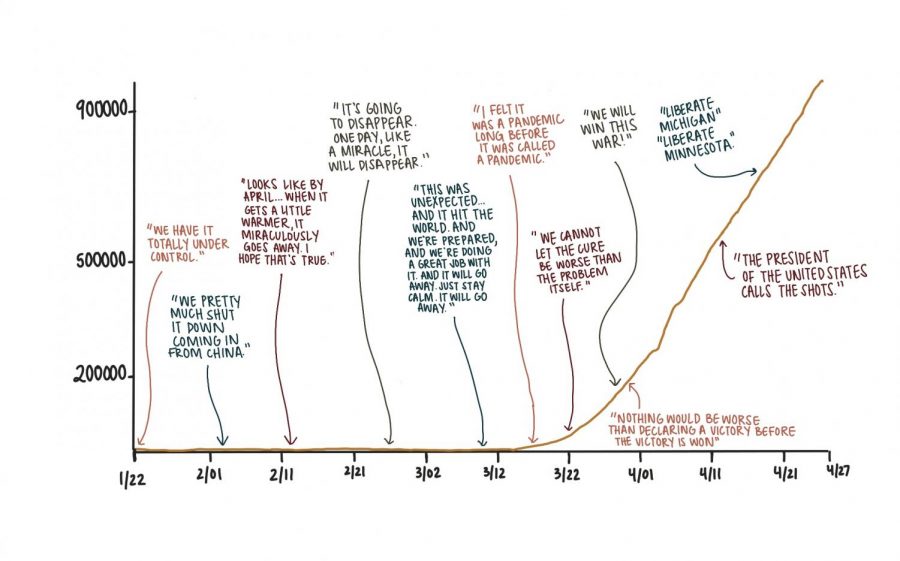 On Jan. 28, a week after the first coronavirus case was identified in the United States, Dr. Carter Mecher, a senior medical adviser at the Department of Veteran Affairs, sent an email to public health experts scattered around the government and universities warning them about the dangers of the virus. “The projected size of the outbreak already seems hard to believe,” said Mecher in his email to this group of health experts. It took six weeks after warnings from Mecher and top White House advisers for President Trump to finally take aggressive action to confront the coronavirus. This pandemic is now forecast to take tens of thousands of American lives. Many of these deaths could have been prevented if the Trump-led government took more aggressive action against the virus sooner.

Currently, in the midst of the COVID-19 pandemic, 97 percent of the U.S. population is under stay-at-home or shelter-in-place orders. Even as the infection rate in the United States continues to rise, President Trump indicated that many states could reopen by May 1, and that he would share federal guidelines for restarting the economy with governors. I believe that deciding to reopen in some states while the curve has not even flattened yet is a disastrous idea that would make the economy and the infection rate even worse.

If states start to reopen their economies right away by May 1, the infection rate would inevitably spike with less people practicing social distancing. As the infection rate for COVID-19 spikes, the U.S. health care system would become even more overwhelmed which could lead to more preventable deaths. With a spike in infection and death rates, I’m certain many people would not want to leave their homes. In this case, the economy would not even improve from re-opening businesses and more people would be dying from COVID-19. Morality aside, the economic benefits to reopen businesses this soon would definitely not outweigh the economic and human costs, so why is there such a large push to open up the economy in some states? While Trump did criticize Georgia governor Brian Kemp’s plan to re-open businesses within the state in the coming days, it was still extremely reckless for the president to even suggest that states could start reopening their economies as soon as May 1.

Additionally, President Trump has been responding to the pandemic by hyping up unproven COVID-19 treatments. Most notably, Trump has claimed that the drug hydroxychloroquine could be used to cure the virus even though medical experts completely disagree. Trump urged US citizens to take the anti-malaria drug in early April, but backed off when studies suggested hydroxychloroquine was ineffective in treating COVID-19 patients or contributed to higher death rates. Now, the President suggested that Americans could “clean” their bodies by injecting disinfectant to treat the coronavirus. Trump suggested this unproven COVID-19 treatment in response to Bill Bryan, head of the Department of Homeland Security’s Science and Technology division, touting disinfectants’ ability to eliminate coronavirus on surfaces. According to Harvard Toxicology, injecting bleach or drinking disinfectant causes hemolysis—where red blood cells that carry oxygen break apart—and cause liver damage. Additionally, many disinfectants can cause dangerous burns or bleeding in one’s stomach. Trump’s suggestion of these unproven treatments for the coronavirus in front of a national audience is extremely reckless and unsafe. This only encourages American citizens to try these “treatments” themselves and do harm to their bodies or potentially even die. By turning attention to unproven, harmful and ineffective treatments like hydroxychloroquine and injecting bleach, President Trump has only helped put more American lives in danger.

All in all, it would be dishonest of me to call Trump’s COVID-19 response anything but disastrous. In the early stages of the pandemic, his inaction in terms of slowing down the infection rate has contributed to thousands of preventable American deaths. Trumps’ aversion to science and facts are a danger to this country, especially during a deadly global pandemic. The President’s recklessness when it comes to reopening the economy and promoting unproven treatments will only end up taking more lives than saving them. The state of the economy should never be prioritized over human lives, especially since reopening businesses during this pandemic would not lead to much of an improvement anyway. For President Trump and some governors to suggest otherwise is extremely misguided and completely flies in the face of logic. During these trying times, the American people deserve a leader that has their best interests and general welfare in mind instead of a leader  that actively works against them.