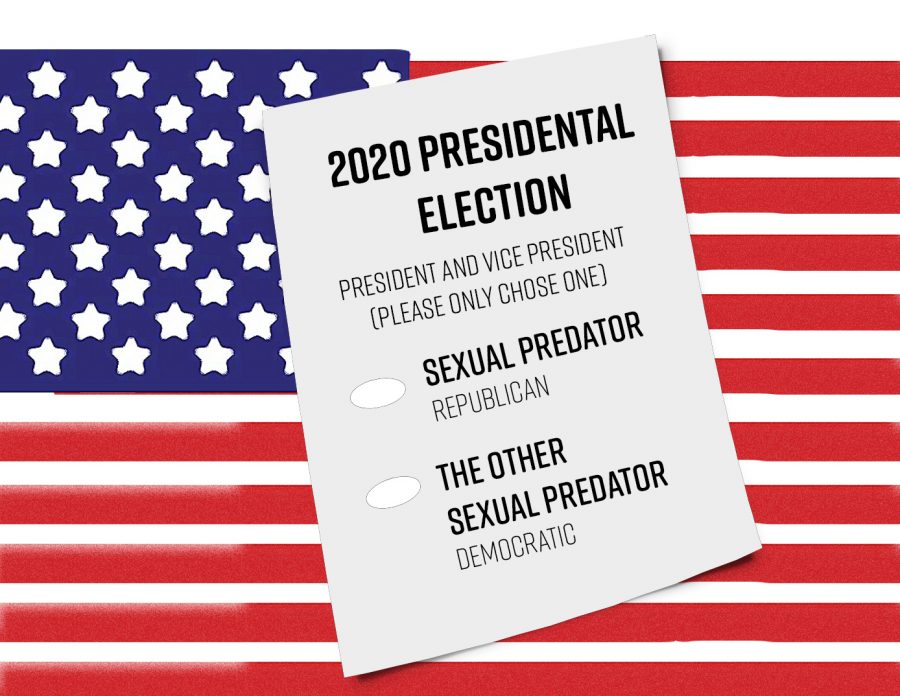 With Bernie Sanders suspending his presidential campaign last week, the Democratic presidential nomination is all but wrapped up for Joe Biden. Barring any unexpected changes, the 2020 presidential election will be between Biden and the Republican incumbent Donald Trump. Besides having similar policy positions in some respects, Trump and Biden both share the fact that they have credible sexual assault allegations levied against them.

Tara Reade, an aide to then-Senator Biden, claimed that Biden repeatedly touched her without her consent and sexually assaulted her when she worked under him in 1993. “It shattered my life,” Reade said in a March interview with journalist Katie Halper. While Trump has had widely publicized, credible sexual assault allegations surface since 2015, it is interesting how many media outlets have ignored or outright dismissed Reade’s allegations against Biden. Since Biden is running for the highest office in the country, I find it especially concerning that the press has been so unwilling to look very deeply into Reade’s allegations.

One of the most frustrating things about the response to Reade’s allegations by Biden supporters and the media is the hypocrisy. I have seen some voters and media members smear Reade as a liar and a Russian plant without any evidence to back up their claims. Believing women should not have a partisan bias. The Time’s Up Legal Defense Fund, which is set up to help surviviors of rape and sexual assault, even refused to fund a #MeToo investigation into allegations against Biden. This is an especially interesting decision considering that Reade’s allegations against Biden are just as credible and offer the same amount of evidence as Christin Blasey Ford’s allegations against Brett Kavanaugh. This organization was set up to assist and provide resources for survivors of sexual assault, so why is there an exception for Reade? Is the #MeToo movement really about believing women or does this only apply to women who accuse Republican politicians and officials? If the former really is the case, Time’s Up would not have dismissed Reade’s allegations against Biden so quickly.

This blatant hypocrisy displayed by supposed allies of sexual assault survivors reminds me of the Clinton-Lewinsky scandal that came to light in 1998. Monica Lewinsky, the 22-year-old White House intern, was engaged in an affair with the 49-year-old president Clinton. Despite the significant age and power differences between the two individuals when this affair occurred, Lewinsky was shamed and ridiculed by the public and media for her relationship with Clinton. Although Clinton had sexual assault and misconduct allegations against him dating to his time as a politician in Arkansas, he was painted as the innocent victim in this situation by many. The media responses to the Clinton-Lewinsky scandal and the Reade allegations show how far this system is willing to go to discredit women who implicate powerful men in predatory and abusive behavior.

In 2017, multiple women came forward to accuse Democratic Senator Al Franken of sexual misconduct. Upon hearing this news, around 30 Senate Democrats urged the Senator from Minnesota to step down, which he obliged. I thought this was the correct way for Democrats to handle this situation and would set the standard for future allegations against Democratic politicians. However, that all went out the window when Reade’s sexual assault allegations against Joe Biden came to light this year. Why are the allegations against Joe Biden held to a different standard than the credible accusations against Brett Kavanaugh, Roy Moore and Donald Trump? The fact that Biden has barely been questioned or vetted on Reade’s accusations by the media is deeply disturbing and hypocritical. The ugly attacks levied against Reade by the media and Biden supporters in response to her interview with Halper only reinforces the hesitancy of sexual assault survivors to speak out against prominent public figures.

Believing women should not be conditional depending on the letter next to the name of the politicians that are accused. The Time’s Up Legal Defense Fund’s refusal to investigate Reade’s allegations against Biden shows how the #MeToo movement has been co-opted by partisans to score political points rather than call attention to the voices and stories of sexual assault survivors. I believe Tara Reade as much as I believed Christine Blasey Ford, but it seems Time’s Up can’t say the same. Ultimately, the American people deserve much better than having to choose between two alleged rapists to be the country’s next president.