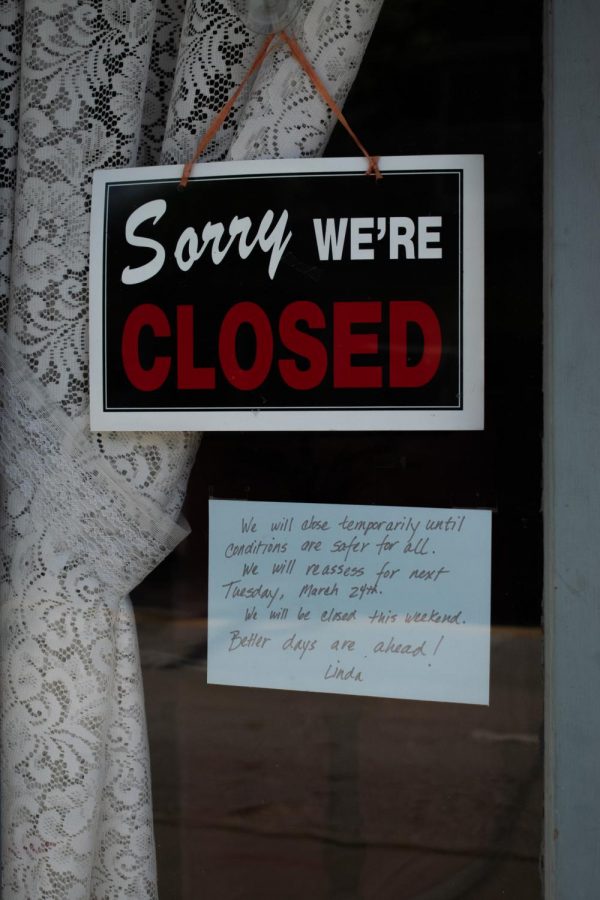 Nearly every shop along Main Street had a sign saying it was closed for COVID-19.

If I had to describe these past few weeks, I think surreal and unpredictable would be the best words to do so. I remember finishing my midterms, eager to go home and already excited to see my friends after spring break. Little did I know, and I believe nobody could have predicted this, that I wouldn’t be seeing St. Louis again for a long time.

The weeks went by, I moved out and settled in at home. I think at first everybody thought life could carry on like normal for awhile, then it seemed like we may just have to hang in there for a few weeks. Now the future is hazy, but I want to believe there’s a light at the end of the tunnel. And as the weeks have begun to feel like both years and days, it has been critical to carry on with some sense of normalcy to break apart the boredom. I decided it would be best for me to get out of the house some; I hadn’t walked around or done anything for the past few weeks. My daily routine had become a mix of sleeping, schoolwork and video games. Anything to occupy my mind. And frankly I was tired of it, all I knew about the world came from the TV and whatever I saw on social media. I needed to poke my head into the outside world and figure out what was going on.

So I decided the best course of action was to phone up a friend, grab our cameras and set out around our hometown. We took the necessary precautions, social distancing, hand washing, about anything you can think of. I’m fortunate that Ohio allows people to go out to parks and take walks, I have a lot of friends in different states that are experiencing drastically different things.

Our first stop was the “downtown” area of my hometown, it was never much of a sight compared to other towns, but it still had its charm. Most of it is just one road with some shops, all surrounded by houses. As we walked along I couldn’t help but notice the town had a different energy. Normally I’d spend entire days downtown visiting my favorite coffee shop and popping into the antique stores that lined the streets. You could see friends, families and couples lining the sidewalks taking the time to enjoy the fresh air regardless of the season.

However, now the stores were closed, restaurants were deserted and sidewalks barren. I saw a few local families out for fresh air, and some cars passed through, but it was almost as if the life had been sucked out of this town. On many stores there was a sign indicating they were closed, though some still offered services like delivery or carry out. Others allowed people inside, but had signs detailing how many people were allowed to enter at one time. What I think was the most upsetting was some of the signs had a return date on them, which was often scratched out and rewritten multiple times because the business owners weren’t sure when they’d be able to return to normalcy again. These small businesses are iconic to everyone in my community, and it stung a little to see them shut down.

After spending some more time downtown, we eventually drove over to a local park. I’d spent a lot of time there as a kid. It was one of those parks with sports fields, playgrounds, trails—something for everybody. I knew it wouldn’t be busy, but seeing it so empty was still jarring. A handful of joggers took up the trails, and there were some people in the dog park. But the playground was closed off with that orange construction mesh, and the fields were empty. Normally around this time of year you would hear some type of sport being played, or maybe crowds of people walking around with their families. Instead there was nothing. Even when you expect nothing it still feels wrong.

Our final stop was Walmart. Although Walmart isn’t exactly our small town staple, I wanted to see the panic buying with my own eyes. Walking into the store was a strange experience, there were cart barriers in front of most of the entrances, with only one being open. Outside stood a greeter who was presumably tasked with keeping track of how many people enter and leave. The inside was surprisingly well stocked, most sections had practically everything they always did, albeit with a few empty spots on the shelves. And since most of the hysteria had died down, food seemed to be in good supply. However, the toilet paper and cleaning isles were practically empty, which was expected, but still strange to see in person. Meanwhile at the checkout line I noticed blue tape on the ground, six feet apart to help guide social distancing. It really wasn’t something super surreal, but at the same time knowing the context behind it somehow threw me off even more.

I have to say that getting out of the house, although relieving, was also a reminder that this is our daily life now. One day this all will die down, one day we’ll be back in St. Louis again, seeing our friends and relaxing on the quad like none of this ever happened. But that day is not today, and it isn’t tomorrow. Until then the most we can do for each other is carry on. Make the most of your newfound leisure time, and most importantly, remember that we’re all in this together.