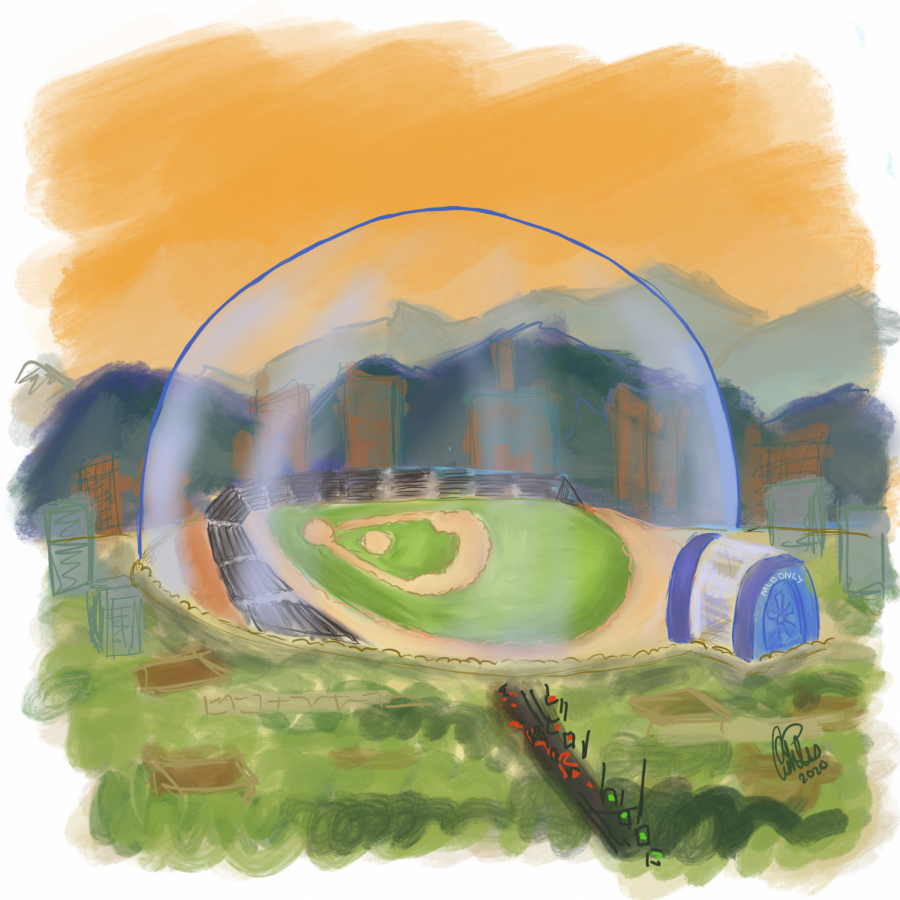 As it has been over five weeks since a sports contest has been held in the United States, professional leagues are brainstorming all solutions imaginable. Professional sports are businesses and they are exploring ways they can mitigate losses during the COVID-19 Pandemic. This means attempting to find creative solutions to a difficult situation. One sports league, Major League Baseball whose season was planned to begin March 26th has internally proposed two potential ways to get the league going again.

ESPN’s Jeff Passan reported that MLB has pondered beginning the season with all 30 teams playing games in Arizona. The idea is to have all players, coaches, and umpires flock to the desert along with essential personnel to create a “bubble” for games to continue. No fans would be in attendance and games would be exclusively broadcast on television. Those players, coaches, umpires and essential personnel would be isolated in hotels with the exception for games, practices, and the transportation between the hotel and those events. The proposal has teams playing in facilities used by the Spring Training Cactus League and local universities along with Chase Field, the home of the Arizona Diamondbacks.

On the surface, this proposal seems viable to play as many games as possible while maximizing potential revenue. National TV networks hungry for live sports programming could bid up prices for broadcast rights. Optimistically, the season could pick up at some point in the teams’ home cities with an improvement in the health crisis. Although, the proposal has many underlying questions that would need answers before play could begin. Some of those include how players would handle desert temperature in July and August, a way to routinely test players and coaches, locker rooms and social distancing among participants, and the feasibility of isolating players from their families for an extended period of time. Creating a bubble for players to live and work in is feasible, but maintaining the health (mental, physical, and emotional) of the teams and producing a quality product may not be plausible given the possible length of the COVID-19 crisis.

A second proposal to begin play was also leaked to the media, and it involves teams returning to their Spring Training facilities in Florida and Arizona. The league would split into its current Spring Training Leagues, the Grapefruit and Cactus leagues. There would be no interleague play and Divisions would be realigned geographically. For example, the St. Louis Cardinals would be grouped with the Astros, Marlins, Mets and Nationals in the East Division of the Florida Grapefruit league. Teams would play 12 games each against division opponents and 6 games each against league opponents.

Splitting into new leagues is radical, but it may be more feasible than the Arizona plan. Teams would have their own facilities and potentially be able to live in their “Spring Training homes” instead of hotels. This plan would account for a universal designated hitter and a late-season playoff schedule. Ideally, the unique situation could produce expanded playoffs and would lead to a Cactus vs. Grapefruit World Series played at a Neutral site in November or December.

A drawback of the Cactus and Grapefruit plan would be the inability for teams to return to their home cities given an improvement in the health crisis. Also, teams would not have competitively balanced schedules with 15 teams in each league and no interleague play. Although, that could be solved with an expanded playoff scenario. Another unfavorable situation is several current rivalries would be put on hold including the Cards-Cubs series. All of these situations are unfavorable but may be needed for baseball’s 2020 return.

So when could baseball begin again?

Dr. Anthony Fauci, director of the National Institute of Allergy and Infectious Diseases, sees a way for sports to begin in the future. In an interview run by Snapchat, Fauci expressed his perspective which includes playing in empty stadiums and testing players often. “Have them tested every single week and make sure they don’t wind up infecting each other or their family, and just let them play the season out,” said Fauci, “I want to see them (sports leagues) play again”

As the United States and World progresses into the unknown waters that surround this Pandemic, the MLB and other sports leagues are doing all they can to get sports going again. Who knows when, where, or how the first pitch will be thrown this year, but we already know why that pitch will be thrown:

it will be thrown for all who have died,

it will be thrown for all who have been infected,

for all who have cared for those impacted by the disease,

for all who are essential workers,

for all who have lost their jobs,

for all who have missed graduations, weddings, and other milestones,

for all who have sat it out at home, not knowing when things will change,

and for all of us.