The University News • May 7, 2020 • https://unewsonline.com/2020/05/fiona-apples-fetch-the-bolt-cutters-is-an-unfiltered-expression-of-self/ 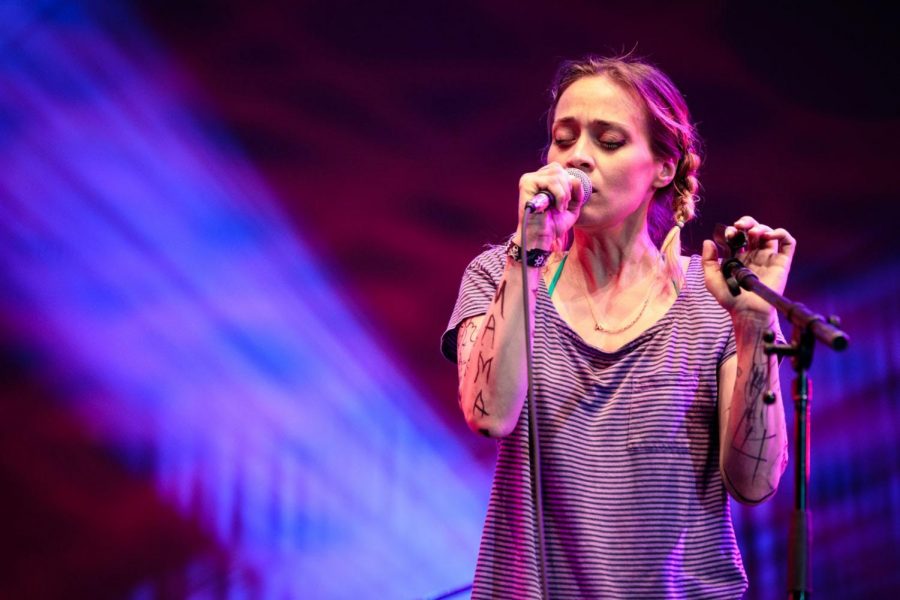 It’s fitting for Fiona Apple to open her first album in eight years with the line “I’ve waited many years, every print I left upon the track has led me here.” It’s been nearly 25 years since her now iconic debut, “Tidal,” and this marks her fifth record. A lot has changed since then, but the world still hasn’t quite caught up to her lyrical prowess even on that debut. And “Tidal” was released when Apple was 18, which meant one of the most well-written, fully formed debut records of the 1990s was written entirely by a highschooler. Now she is 42 and her lyrical and musical abilities have only matured with time. At this point it would make sense to say she is and always has been way ahead of her time, but her sound is nearly impossible to replicate and few have tried. A Fiona Apple record can only be a Fiona Apple record and that is especially the case with “Fetch the Bolt Cutters.”

But its beauty is found buried beneath its chaos. Where her last record, 2012’s “The Idler Wheel…,” had the precise beauty of a bird singing outside your window, “Fetch the Bolt Cutters” is that same bird coughing up a worm lodged in its throat, screaming whatever it needs to to let out something that’s been kept inside for too long, and while Apple has never been one to hold herself back, any filter she might have used on her previous efforts is gone now, instrumentally and lyrically, for a completely uncompromising listen, pulling no punches whatsoever. It may feel rather unkempt upon first listening, but it doesn’t take long to fall in love with the percussion-heavy instrumentation, most of which was recorded in and using her own house, banging on walls and stomping on floors, drawing inescapably comparisons to similar ideas from Tom Waits’ discography. This home-spun, do-it-yourself quality carries itself throughout the entire project—you can even hear Apple and friend/actress Cara Delevigne’s dogs barking towards the end of the title track as it devolves into a brief drone of bells and howls. Beneath this meticulous chaos is, of course, Apple’s amazing piano playing.

Still, following tradition with frameable one liner after another, the true star of the show is Apple’s dense lyricism. A lot has happened in the past eight years that has festered in her mind until they came out in a song, but she hasn’t been totally silent. She has answered fan questions online, made appearances at several protests, even writing chants for them like the angry and humorous “Tiny Hands,” shown up on a couple of features including for King Princess and Phoebe Bridgers and commented on whatever she felt the need to comment on. A Google search can take you to anywhere between harsh criticisms of Kanye West to Apple mourning the late Mac Miller to live performances of her half-original Christmas classic “Trump’s Nuts Roasting On An Open Fire.”

It’s no surprise this album was going to take a more unfiltered approach than her previous efforts and fans were certainly expecting political themes to show up. After all, the 2010s was the decade of #metoo and #timesup, Donald Trump’s presidency and, what seemingly shook Apple the most, the fall of Harvey Weinstein, whose lawyer she insultingly, and poignantly, called an “old white man.” She even considered using a sketch of Weinstein with his walker as the cover art. In the grand scheme of things, an artist commenting on the state of women in 2020 wouldn’t be cause for more than a head turn, but in the context of Apple’s, and any female musician’s, career, the way society has changed means so much more. This is roughly 20 years after she famously chanted “there is no hope for women” during a 1997 photoshoot for SPIN magazine. But when a fan asked about that in 2018, her response was beautiful. “That’s not true anymore,” she said, “we’re gonna be fine…There’s always hope for women. We are hope. We are the hope in the world.” If women truly are the hope of the world, Apple is proof of it on this album.

Above all else, “Fetch the Bolt Cutters” is a call for women everywhere to be as loud and unadulterated as her. Her strength comes forward on almost every track, but this mission statement is most perfectly portrayed through a classic dinner party scenario presented on “Under the Table,” where she promises that you can “kick [her] under the table all you want, [she] won’t shut up.” “I would beg to disagree but begging disagrees with me” is just another quote to add to the list of favorites. Like most of the best Fiona Apple songs, this strength is presented alongside whatever topic is being addressed in the song. It powers through depression on “Heavy Balloon,” where she growls through her frustration so convincingly it’s hard not to believe her when she says her emotions are “busting at the seams.” It rolls its eyes at the common practice of pitting women against each other on the cheeky “Ladies,” a gorgeous call for sisterhood among all women, speaking fondly of women who date her exes while cordially inviting them to anything she “mighta left in his kitchen cupboards.” This sentiment is similarly addressed through a much darker lens on “Newspaper,” where an emotional connection is drawn from one woman to another through the abuses of the same man.

Her strength is not compromised by her desire to be loved on the immaculate opener, “I Want You To Love Me,” where her vocals range from classic Fiona Apple in the beginning to dolphin- like calls at the end, and on the similarly vocally unhinged “Rack Of His,” where she channels her inner Janis Joplin on the chorus. Relationship dynamics are challenged even better on “Cosmonauts,” which, if I had to pick, is the brightest highlight on the album. The last minute is one of the most rewarding climaxes of any song you will hear in 2020, as the instrumental picks up its intensity and Apple starts screaming the repeated chorus.

But while so much has been said about the strength leaking throughout this record, the bittersweet “Shameika” quickly became a fan favorite for its manic instrumental and even more so for its cutting story. Here, she recalls an important moment in middle school, when a tough, unfriendly girl told the sad, bullied Apple that she has “potential.” “Shameika said I had potential” might be one of 2020’s best music memes so far, but it’s a perfect portrayal of what it’s like to have a moment in your life where the smallest gesture can mean so much more to you than what was intended. This combined with the heartbreaking bullying Apple experienced makes what is simultaneously one of her saddest and most optimistic songs to date.

Sometimes these tracks feel less like laboured-over poetry and more like lightning in a bottle bursts of emotion, and this is especially the case during the last leg, which includes more of what feels like chants than songs. “For Her” includes the line “good morning, you raped me in the same bed your daughter was born in” during a verse written shortly after Brett Kavanaugh’s nomination hearings, a line she hopes that “women and men will be able to sing along with… and allow it to tell [their] truth for them.” “Drumset” was born out of an unaltered voice memo of combined frustration with her band members and her ex boyfriend, and the closer, “On I Go,” is a chant that addresses these flashes of emotions that informed so much of the record. “Feelings arise and fall away again, and it’s all impermanent,” she said, “to be at peace with this concept is to be happy.”

The impactfully subtle title track is, in her words, “about not being afraid to speak,” breaking out of the prisons she has placed herself in. But she isn’t asking someone to let her out, instead calling “fetch the bolt cutters, I’ve been in here too long,” ready to break out herself. And this mental prison Apple and so many people find themselves in is more than just a cage, it’s the beginning of a cycle of negativity and abuse. The hook on “Relay” has a similar sentiment: “evil is a relay sport when the one who’s burned turns to pass the torch.” She’s kept this line in her mind since she was 15 and it took 27 years for her to find the right time to use it. Apple says a lot on this album, but what I hear most of all is a demand to stand up for yourself and live your truth, to know you matter no matter who says you don’t and that just because no one’s there to see your pain, it doesn’t mean it isn’t valid. As she sings on the opening track, “a sound is still a sound around no one.”