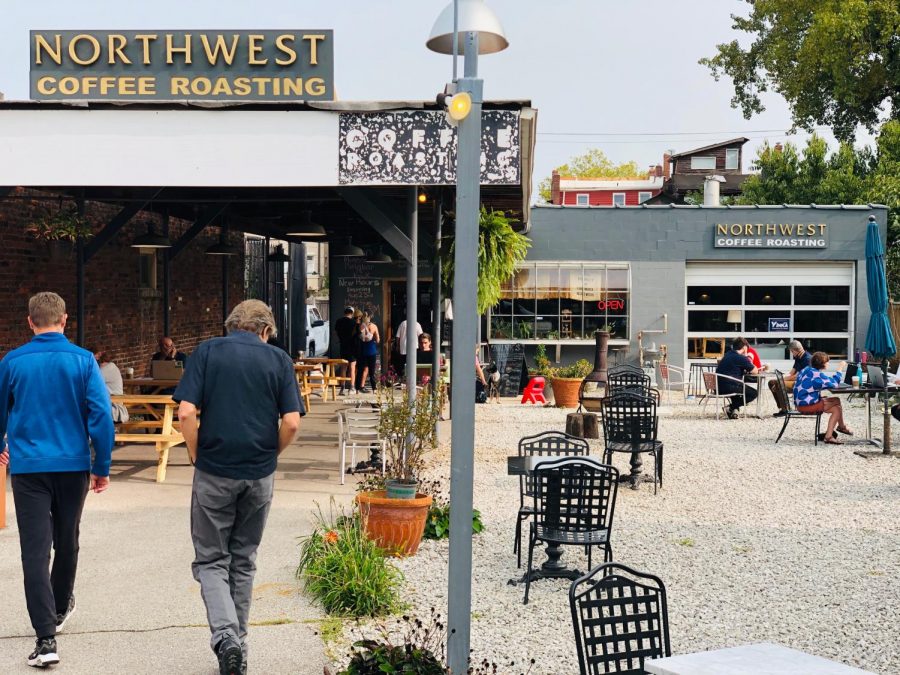 Northwest Coffee owner Jason Wilson rolled the dice by staying open during COVID-19 and won big time. When many St. Louis businesses were cutting staff and hours, closing their dining rooms and suffering from a loss of revenue due to the COVID-19 pandemic, Northwest Coffee Roasting Company tripled their revenue. In April alone, the local watering hole saw an increase in twenty percent of patronage which is practically unheard of for a local business in the height of a pandemic.

What can Wilson and Northwest’s success be attributed to? High-quality coffee, excellent customer service and a welcome and diverse, COVID-19-friendly environment. The business is nestled into the back of a large lot on Laclede and Boyle, a mere ten minute walk from SLU’s campus.

Owner Jason Wilson, who bought Northwest Coffee in 2012, takes great pride in him and his staff’s ability to cater to the demand of the St. Louis community during such an uncertain time. “It’s been great honestly,” Wilson says.

On any given morning, the spacious lot is filled with patrons safely distanced. Some are studying, others are conversing with friends and some are just getting a cup of joe and passing through. The increased popularity of Northwest Coffee has brought a vibrant community space to light, but what Northwest and Wilson stand for, has been a part of the St. Louis fabric for much longer than many realize.

Wilson acquired Northwest Coffee in late 2012 along with the now-closed Chronicle Coffee on the northside of St. Louis. Wilson’s goal was to invest in multiple areas of the St. Louis community, namely where food deserts and disinvestment were the norm. Bringing quality coffee and community to these spaces was a gratifying endeavor for Wilson. “It was great while it lasted,” Wilson says.

After Mike Brown’s death in 2014, Wilson struggled to gain a solid customer base for Chronicle Coffee and had to close it down. Wilson notes that nobody wanted to travel to that part of town out of fear. Many community members had a new, harmful perspective on the northside of St. Louis. After Chronicle Coffee closed, Wilson put all his efforts towards Northwest Coffee, and grew it to the business it is today.

The response to George Floyd’s death was almost the exact opposite as Mike Brown’s. Wilson notes that people began flocking to Northwest, tipping extravagantly and supporting him as a Black business owner.

This response was confusing for Wilson. While more support and patronage was clearly a positive, Wilson initially felt conflicted. Having gone through extreme disinvestment with Chronicle Coffee, watching the community take a totally different approach was a bit jarring.

He thought, “don’t support me because I’m Black.” He wanted to be known for his good coffee and community space, not just reduced to the color of his skin.

As time wore on and he had more conversations with family and friends, Wilson pivoted his perspective and accepted the tips and patronage. Still, he struggled as he felt bad on both sides of the coin: being discriminated against because he was Black and being praised because he is Black. Wilson grapples with the questions, “Why go through this all the time? So many Black men have to die … why did George Floyd spark?”

Wilson notes that there are other challenges linked to the color of his skin outside of the community response to the wrongful deaths of Black men. When Wilson purchased Northwest Coffee in 2012, he sat on a board at the Contemporary Art Museum, and many of his distinguished peers explicitly stopped supporting the business because they didn’t trust that Wilson would do a good job.

Since then, Wilson and Kirkman have traveled to Tulsa, Oklahoma to make a similar video on what once was Black Wall Street, bringing to light the entrepreneurial spirit that remains in Black communities across the country.

Patrons of Northwest Coffee are choosing to get out of their comfort zone and step into a diverse space when they sit down at a picnic table on Wilson’s lot. People from all over the community enjoy what Northwest has to offer: community, safety and diversity.