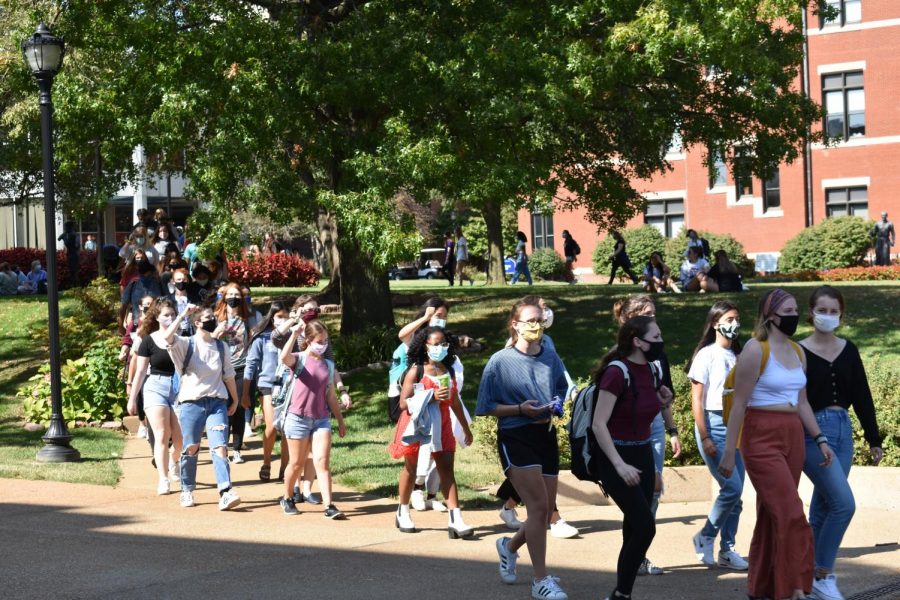 “If y’all want to chant, we can sit here and chant all fucking day,” said Ashlee Lambert, a Saint Louis University graduate student, who was thrust into a leadership position of a protest on campus earlier today.

For Lambert, it all began yesterday morning when she wrote “Black Lives Matter” and “No officer was convicted for the murder of Breonna Taylor,” among other messages in chalk on the campus’ clock tower.

It was soon made apparent that this opinion wasn’t shared by others on campus.

Some time since yesterday morning, an unknown individual or group used a permanent marker to write over Lambert’s messages with their own. “Trump 2020” and “David Dorn” were etched over the chalk writing on the clock tower’s base and sides, as well as on a nearby bench.

The marker that was used was taken from the clock tower’s base, where Lambert and other activists originally left out sticky notes and the marker to write the names of victims of police brutality.

A crumpled up sticky note was also found at the scene, stating that “The court was correct, and Breonna was a criminal.”

When the defacement was discovered this morning, students sprung into action. Some worked on scrubbing off the markings and others planned a meeting at the clock tower to take place in the afternoon.

The writing that stated “Trump 2020” on the nearby bench was successfully removed, but the others, written on concrete, were covered by poster board or chalk with more messages about the Black Lives Matter movement.

SLU administration was soon notified, and maintenance staff is expected to arrive Monday to clean the messages off entirely, once they have the correct equipment.

It was no coincidence, though, that this ordeal took place at the clock tower. The Clock Tower Accords, a 13-point document that commits SLU to actively fight racism on their campus, was originally created in 2014. The university signed the Accords after the community protested for six days at the clock tower. To this day, administration is expected to uphold these standards.

The clock tower is a staple of the university, acting as a convergence point between all of the campus’ main pathways. For this reason, the structure stands as a historically important monument for dialogue.

Lambert had this in mind when she swiftly stepped onto its base, becoming an impromptu leader of the group in front of her. With her feet firmly on the concrete below her, she began to speak to her fellow students.

“We tried to educate them on this shit, and motherfuckers came out here and defamed it,” she said, gesturing towards the markings behind her.

“People are losing their lives and SLU isn’t saying anything,” she said. “Please use your voice, because your voice is so important.”

Vanessa Sarmiento, a SLU junior who also spoke to the crowd at the clock tower, said, “How comfortable are you in your security at this university, that you’re able to do this shit with Sharpie, that you know you won’t get in trouble?”

Lambert then pulled a notebook from her backpack, flipping past her notes to the first available page. She began passing it around, telling students to write their information, creating a petition for SLU administration to see.

What started out as a gathering of concerned students soon turned into an organized march through West Pine. The students and activists made their way from the clock tower to the new STEM building on the other side of Grand Boulevard and back, passing by numerous classroom halls and administration buildings. All the while, they alternated between chants of “No justice, no peace, no racist police,” “Black Lives Matter” and “Say her name: Breonna Taylor.”

Eventually, the group blocked traffic on the campus’ Grand Boulevard. crosswalk, whilst chanting, waving flags and throwing fists in the air. Individuals only receded from their positions to let city buses through, reasoning that blocking them would primarily affect the already marginalized communities that frequently ride the bus.

The students and activists hope the university’s administration will begin an investigation on the vandalism that occurred on campus today.

In the meantime, students plan on camping out at the clock tower to make sure no harm comes to their messages.

“I’m just parking it here to make sure nobody writes anything else,” said Erin Bargiachi, a student sitting on guard at the clock tower base.

Bargiachi had seen the commotion when she came out of class this morning and upon realizing what happened, she stopped to help with the cleaning process. Despite being at the site for hours, she had no intention of leaving.

“After it gets cleaned on Monday, I’ve been telling people to come back and redo all of this chalk—so that’s my plan for the weekend,” she said.

With the Saint Louis University student activists showing no signs of backing down, all eyes are on university administration to make the next move.