A Week of Strength 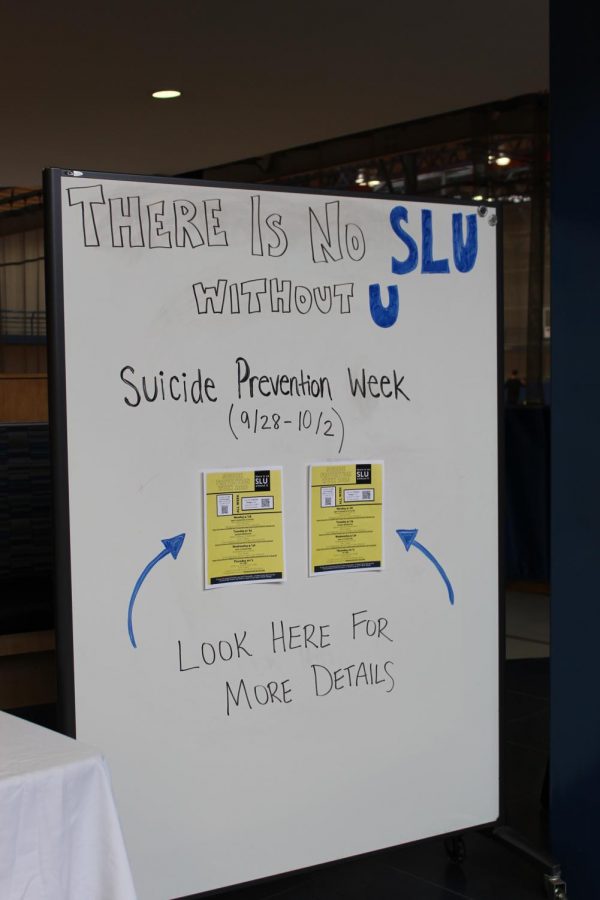 This past week, SLU students have come together via Zoom to support one another’s mental health.

SLU participated in Suicide Prevention Week from Sept. 28 to Oct. 1. The Campus Recreation and Wellness team put together events in partnership with Active Minds, a mental health club at SLU, the University Counseling Center and the Billiken Wellness Ambassadors.

The week included events like a Signs & Symptoms of Suicide presentation by Jenny Scott from the University Counseling Center, guided meditation with the Billiken Wellness Ambassadors, Save a Friend Chat with Active Minds and Yin Yoga led by a SLU student, all of which were organized by SLU wellness coordinator Tori Harwood.

“I really wanted this week to give students a chance to try something new when it comes to their mental wellness and learn more about the resources that are offered right on campus,” Harwood said.

Sarah Goble, the senior who led the Yin Yoga event at the Simon Recreation Center, was asked to lead this event because of her history and openness about mental illness.

“I think having a suicide prevention week really opens those doors up to allow people to get informed while also giving someone who may be struggling the tools they need to truly find help,” Goble said. “Everyone needs a helping hand during those times, but very few people are willing to open up and talk about it when they’re struggling.”

Bridget O’Reilly, a junior at SLU, was happy to see that SLU’s participation in mental health awareness has surpassed that of the college she attended previously, though believes that Suicide Prevention Week could have been more publicized at SLU.

“To even have Active Minds at all is such a big step, my other institution did not have anything comparable,” O’Reilly said. “It’s really fantastic.”

O’Reilly especially approves of SLU’s encouraging students struggling with their mental health to talk about their troubles.

“It’s very important to me to not only bring awareness to the issue but also to reduce the stigma so more people feel comfortable talking about their experiences because I know that talking about it was the only way that I started to get better,” O’Reilly said.

SLU freshman Molly Moon agrees that destigmatizing mental health should be an important part of every institution.

“Being able to have a community of people you can go to when you’re having a bad day or need someone to talk to about stuff or someone who can relate to you and understand what you feeling and going through is so beneficial,” Moon said.

Outside of suicide prevention week and mental health awareness month, Moon believes we should all be working to create an environment where people feel safe to share their experiences.

“I try to be such a big advocate for awareness because I think that if people realize they aren’t the only ones struggling it helps others to know and feel more comfortable,” Moon said.

SLU freshman Doris Mantzke attended the Save a Friend event held by Active Minds last Wednesday. She has been affected by suicide in the past and recognizes the importance of educating people on how to recognize the signs of mental illness and methods of coping with them.

“My sophomore year of high school my best friend passed away because of suicide,” Mantzke said. “Suicide Prevention Week lets people know that they have resources and people do care about them.”

Maddie Sayasane, a freshman nursing major, has similarly had friends struggle with mental illness and has struggled herself. For her, Suicide Prevention Week is important to spread awareness and support opportunities.

“I don’t want anyone to have to go through the pain of losing a friend or feeling like that’s what they need to do,” Sayasane said. Harwood agrees with that sentiment.

“Suicide rates and Mental Illness is, unfortunately, growing among the college student population and we want to do everything we can to support those who are experiencing mental health challenges and prevent suicide,” Harwood said.

According to the American Foundation for Suicide Prevention, suicide is the 10th leading cause of death in the United States. There were around 1.4 million suicide attempts and 48,344 Americans died by suicide in 2018. There are numerous ways that everyone can actively work to decrease those numbers.

So, what can SLU students do to help?

“Being there for people, not judging people and being open-minded when people have problems they want to talk about,” Mantzke said.

“Working on destigmatizing getting help for mental health, not just therapy, but also inpatient care, I think is really important as well as fighting for change within the mental health care industry,” O’Reilly said.

“Being more open and, in general, talking with each other more,” Sayasane said.

“Looking back and seeing how people are feeling and trying to change how I treat others for the better and trying to be like more aware in that like even like the littlest things could possibly set someone else off and like trigger them so honestly, just kind of like being kind to others is such a big thing,” Moon said.