Chalk the Talk, Walk the Walk 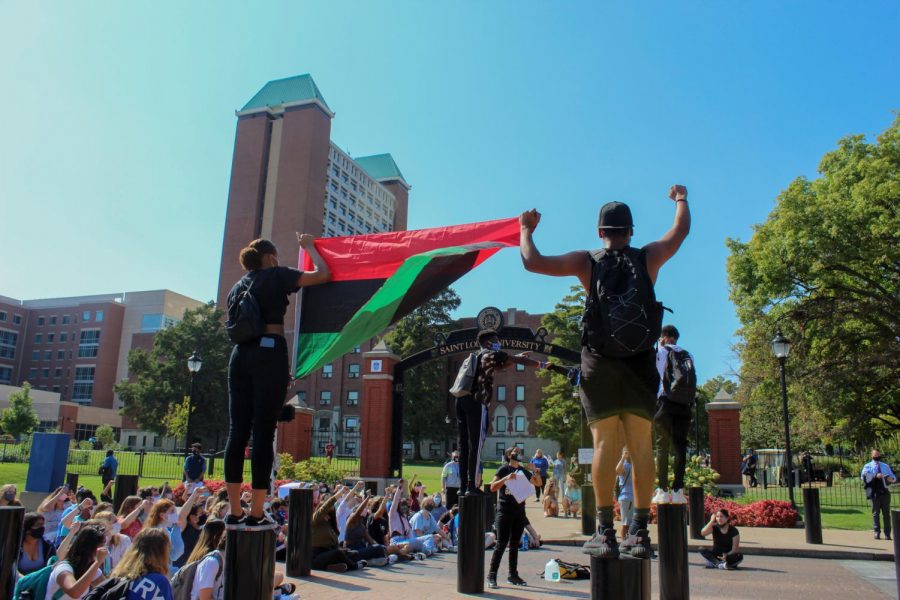 “No officer was…” Ashlee Lambert, SLU graduate student, began to write on the clock tower of North Campus the morning of September 24 with chalk.

“Her life was taken in her sleep, and nothing was done about it,” Lambert says of her motive for writing on the clock tower. “They took her life and there are no repercussions for it. None. And I don’t think students need to go around ignorant to the fact that that happened yesterday.”

For the rest of that Thursday, Lambert stayed at the clock tower and welcomed any discussion. “I just woke up feeling hopeless, but at the same time I had to do something,” Lambert says. “I wish I could be out in the streets protesting…I’m not that much of an organizer.”

Friday morning, Lambert hoped to sit at the clock tower as she did the day before to welcome discussion and make the area a safe space for anyone who needed to express grief for continued injustices. Around 11 a.m., Lambert received frantic messages from the students of the Micah community, whom she teaches.

The students were asking for cleaning solutions to scrub off messages on the clock tower, stating “Trump 2020,” written in permanent marker over the words she had chalked just the day before. Lambert was heartbroken.

Junior Denise Gomez was the first to begin cleaning the marker off of the clock tower. Students who joined her were equipped with nail polish remover, Comet cleaning solution, water bottles and towels to remove the markings. Campus maintenance was notified hours earlier, but the efforts of the students for the removal came first. Gomez says she began cleaning it up because she was “nervous they would take down everything else.”

All students could wonder is why “Trump 2020” was the response to the students’ mourning of a Black woman whose life was lost nearly 200 days before there was any trial for her murderers.

The communal effort to remove the markings grew, and an impromptu rally ensued. “What are some things that we need to hold SLU accountable for?” Lambert asks, perched up on the circular base of the clock tower. As always, Lambert gave room for students at the cleaning to express their frustrations with not only America, but with the university as well.

Here, Lambert began a list of demands with just a pen and a notebook. These notions were the beginning of a list of 11 demands that SLU students shared with their peers that night at the Breonna Taylor vigil and community discussion.

Just one day earlier, Lambert believed that she did not have it in her to organize a protest. But with hurt in her heart, Lambert found the strength to round up the cleaning crew and started a march down West Pine.

“If y’all wanna march up and down this [campus] chanting, we can march!” Lambert tells the cleaning crew who was ecstatic to start a movement.

Alongside her was Vanessa Sarmiento, a junior at SLU. The two led a large group of students through DuBourg Hall in hopes of getting the attention of SLU administration, and blocked traffic on the Grand Boulevard crosswalk.

With the group of student advocates growing, campus DPS finally redirected traffic. Students at this protest had no issue blocking traffic—even facing a pickup truck head-on with their arms linked in a line.

Students at the crosswalk were unharmed. The initial discussion from the clock tower continued with the support of various faculty members, including the presence of President Fred Pestello, Ph.D., and members of the community.

The group spent hours in the sun listening to their peers and other speakers all for the same reason: justice for Black lives.