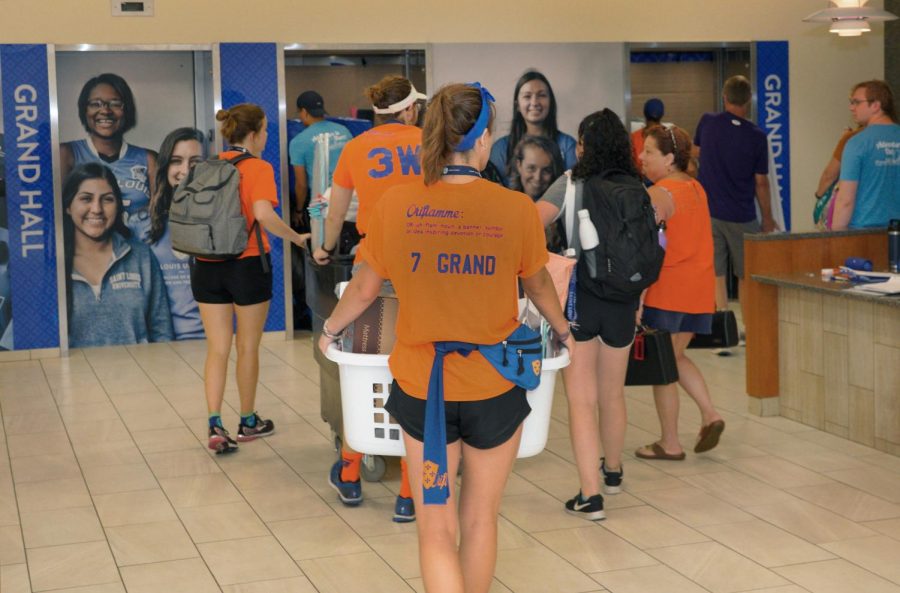 The mural in the Grand Hall lobby was taken down recently by SLU Housing and Residence Life. This change comes as many SLU departments revisit decisions related to representation on campus.

Since the opening of Grand Hall in 2017, the lobby has been home to a mural, or wall skin, that featured the faces of student staff members within the SLU Housing and Residence Life department, most being Resident Advisors. Many community members have long considered this decoration to be an untrue representation of SLU. With recent changes at the university as well as a newfound conversation surrounding representation, equity and inclusion, the fate of the mural was decided.

This wall skin has decorated the Grand Hall lobby for nearly three years, so this begs the question: why now?

“The decision to remove the wall skin was in direct support and solidarity with those whose image was used and those who voiced concern,” says Manisha Ford-Thomas, director of Housing and Residence Life. “Thanks to leadership changes in the department and at the University, HRL was empowered to remove the image.”

According to Fiona Murray, a desk worker in Grand Hall, it happened quite quickly. A maintenance person showed up one day and started taking it down during Murray’s shift.

Many believe the removal of the wall skin is not only a positive change within the department, but within the larger SLU community as well. During the three years that the wall skin has been up, multiple students have used their voices to initiate change.

Faith Nixon, co-chair of the Diversity Leadership Cabinet within SGA, is one of those voices. “I am so thankful that the mural was taken down. This summer I was a summer RA, and I brought up the Black at SLU instagram page during our staff meeting. I informed the HRL leadership of the opinions and how I agreed with the opinions. I suggested that the mural be taken down immediately, I am glad that they listened and took our suggestions.”

This change comes in stride with recent movements on campus that address historically racial and inequitable aspects of the university: with the Breonna Taylor memorial at the Clock Tower, as well as the student protest that stopped traffic on Grand Avenue on Sept. 25.

“This is only the tip of the iceberg of changes that SLU needs to make. However, it is nice to know that SLU’s administration is listening and taking action,” says Nixon.

As the SLU community and Housing and Residence Life department move forward, Ford-Thomas says that “HRL staff will work to ensure residential students can provide their opinions on the images or information that should appear on the elevator bank.”

The wall is currently blank, but Beatrice Beirne, desk manager of Grand Hall, has put up a makeshift memorial to Breonna Taylor in the meantime.