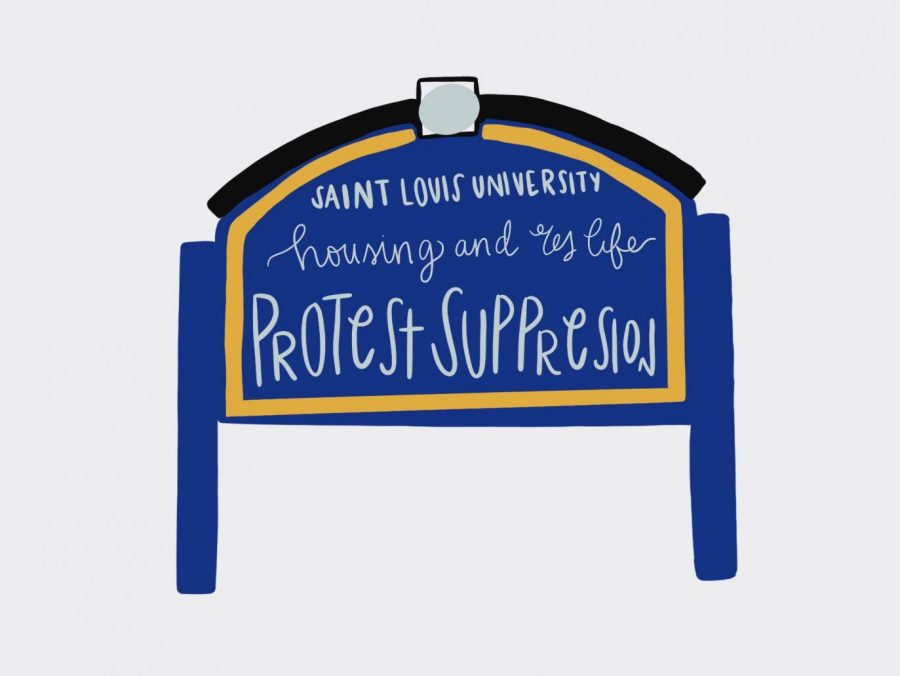 As protests and acts of support for the Black Lives Matter movement spread through college campuses, many universities have been challenged to foster an environment that both promotes social justice and keeps students safe. In the October edition of the Student Staff Newsletter, the Housing and Residence Life administration addressed the guidelines regarding student workers and RAs who wish to participate in protests. The full document covers a multitude of different scenarios and protocols, however, it was the last stipulation of the newsletter that roused concerns across campus;

“Further, even actions taken as an individual can have an impact on your employment with HRL and action may be taken if your actions violate University policy including but not limited to:

Failing to abide by established University health and safety protocols.  Not reporting to work in order to participate in a protest without authorization. Taking notice of protest activities and not following the established reporting procedures. Organizing a protest that occurred, without garnering the articulated permissions for that purpose.”

While the initial murmurs of the policy was widely thought to be a rumor, the newsletter was soon made public to the student body, and quickly appeared in University Senate as an issue for discussion.

Bryce Lackland presented the issue to the Senate, calling for the Student Government to take action against the concerning message. In a personal interview after the meeting, Lackland said that the policy “sets a dangerous precedent that student workers do not have their own autonomy and if one so chooses to stray from uniformity, they would be dealt with.” When reflecting on what he believes to be the intention of the protocol, Lackland said “the only conclusion that I can devise as to the ultimate purpose of this was to control how and whose voices are utilized on campus.”

Many other Senate members and student workers reached out to discuss the matter further. Joseph Good, a representative for the SLU Law School, was deeply concerned about the phrasing and subliminal intent of the newsletter, and provided his legal interpretation of the matter:

Saint Louis University is free to set regulations for protesting on campus due to its status as a private institution. Manhattan Community Access Corporation v. Halleck, 139 S.Ct. 1921, 1931 (2019). However, the issue presented is not the right to protest on private property but the language included in the “HRL Staff Who Wish to Protest” document which states two specific items of note: (1) “It is a privilege to express your solidarity with a cause.” (2) Further, even actions taken as an individual can have an impact on your employment with HRL and action may be taken if your actions violate University policy…”

Good added: “Drawing attention to the possibility of student employment termination as a result failing to follow protocol whilst expressing their opinions on a matter outside of the university’s practices and policies could be viewed as retaliatory against their First Amendment freedom of speech, which is rightfully concerning to the student body. I do not believe that threatening the rights of students to protest is the intent of this document. The beginning of the second paragraph says this much. However, the language in this document could cause students to become concerned about their future as a student employee at SLU if they engage in free speech without following the list of guidelines which pertain to their position.”

Faith Nixon, an RA for the Black and Talented Learning Community, reflected on her interesting position of leading a community of Black students, but feeling jeopardized by expressing her voice, saying, “The statement is basically saying that if I choose to protest as a student that is fine, but not as a student-staff member. What makes it unconstitutional is the fact is that I can’t separate the two identities, and threatening my right to employment for protesting is simply wrong.”

By the time that the Senate met on the 22nd, the HRL office had time to retract the original email, and Manisha Ford Thomas, a representative from the HRL office joined the meeting to discuss the intentions and pitfalls of the message. She explained that the matter was addressed in the email due to some RAs reaching out and asking how they should handle the protests. She expressed the regret that the HRL office had about the miswording and miscommunication, and also praised the SLU community for bringing the issues to light and fighting for an amended policy. SR 017-21 was passed in last week’s Senate meeting, and President Joseph Reznikov hopes that the bill will inspire more collaboration between the SGA and HRL, because in “long term sustainable change, that kind of collaboration is essential.”