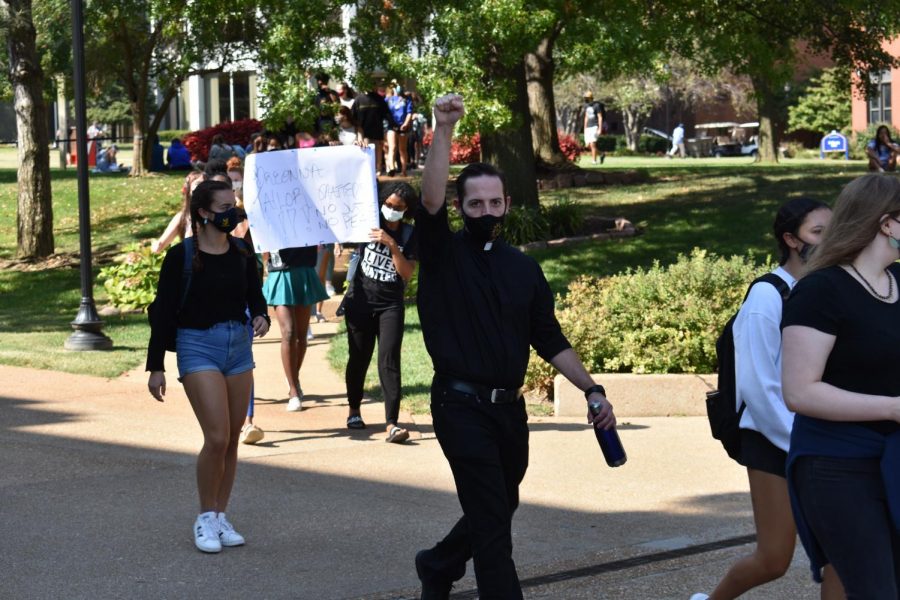 The Jesuit mission reminds us that “Faith, justice and solidarity with the poor and the excluded are central elements of the Jesuit mission of reconciliation.” A central component of this mission is the promotion of the Catholic faith, of which working for justice is a necessary component. With citizens demanding justice for Black lives, some Jesuits, including those at SLU, have been working to advance this goal. As Billy Critchley-Menor, S.J., a Jesuit scholastic in SLU’s American Studies department, states, “God stands on behalf of the oppressed and with the oppressed, and that’s where we ought to stand as well.”

In terms of fighting for the justice, equity and inclusion of black lives, some SLU Jesuits have acknowledged their order’s historic involvement with slavery. “The Jesuits and the Catholic Church had a hand in the perpetuation and the development of slaveholding culture and the institution of slavery, so there’s some responsibility then that the Jesuits and the Catholic Church have to take in rectifying current inequalities that stem from the institution of slavery,” said Menor.

In 2016, The Slavery, History, Memory, and Reconciliation Project began at SLU with the Central and Southern Province. The Project has since expanded and, with the help of some of the SLU Jesuit community, have been and continue to look for the descendents of those enslaved by Jesuits in the past. This Project seeks to engage in truth-telling and conversation with these descendents. According to Jesuits Central South, nearly 200 enslaved individuals helped to establish and sustain Jesuit missions and colleges in places like Missouri, Kentucky, Kansas, Illinois, Louisiana and Alabama.

In response to recent events concerning racial injustice in America, some Jesuits and other lay members of SLU have taken to the steps of College Church to protest anti-blackness and systemic racism. Audrey Williams, sophomore, wrote about the organized weekly Solidarity Stand saying, “I’ve witnessed very powerful things during this weekly gathering of Jesuits in their clerics and mostly-white Catholics with signs facing the busy street of Grand Blvd. in the name of BLM.” The service hosted occurs every Tuesday from 6 to 7 p.m. in front of the college church, and any student is welcome to join.

Some Jesuits at SLU are members of Jesuit Antiracism Sodality (JARS), an organization founded in the Midwest Province and exists in the Central and Southern Province that seeks to create spaces of dialogue and conversation within the Jesuit community about issues of racism and identify ways in which the Jesuits are currently being influenced by systemic racism.

“Our reason to exist is to promote, especially through education, anti-racism within the institution. We will try to continually call the membership of the Jesuits to participating workshops, to read books, to get training, and also to have conversations with our leaders about [policies and initiatives],” said Angel Flores-Fontánez, S.J., about JARS.

Racism and anti-blackness is an issue that cannot be resolved quickly. With the 400 years of buildup, it will take many lifetimes to effectively tear down systemic racism and its oppressive influence on American society. Many Jesuits at SLU within the Central and Southern Province are committed to support this fight. They hope to not only expand their own programs, but see that all provinces across the country take up more anti-racism initiatives.

“There shouldn’t be any doubt whatsoever that the Jesuit mission necessarily requires us to walk with the racial minorities and their fight for justice,” said Flores-Fontánez.