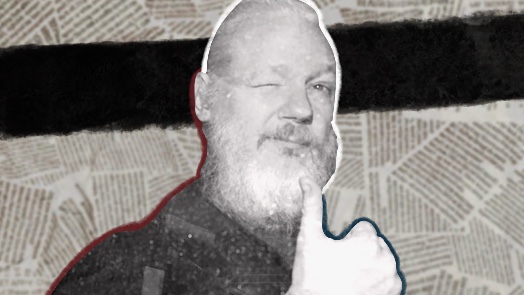 Over the last four years, the loudest critics of President Trump have repeatedly named his contempt for a free and independent press as one of the most dangerous aspects of his presidency. And this criticism is well founded; while Trump is certainly not the first U.S. president to harbor ill will towards the press, his brand of increasingly violent rhetoric towards journalists is entirely unprecedented.

However, a lack of consistency on the part of many of Trump’s most vehement critics leaves their critiques feeling somewhat hollow.  Pundits on both sides of the aisle have denounced Trump’s attacks on the press, and yet, despite an ongoing and quite blatant attack on the most basic principles of a free press there has been nearly unanimous bipartisan silence occurring in the extradition hearing of Julian Assange, an Australian editor, publisher, and activist who founded WikiLeaks in 2006.

Just last month, Assange’s United Kingdom extradition hearings concluded, with a final decision by Judge Baraitser expected in early January. Assange faces seventeen counts of violating the Espionage Act of 1917, which, until now, has never been invoked against a journalist or publisher. If Assange is allowed to be extradited to the U.S. for a trial, he will, without a shadow of a doubt, be convicted and spend the rest of his life in solitary confinement in some maximum security hellhole, all while the criminals whose misdeeds he exposed live out their days in luxury.

Assange has become a bipartisan pariah, despised equally by both the liberal and the conservative establishments. The nearly total media blackout on the hearings in the mainstream U.S. press has been almost as troubling as the hearings themselves. The Washington Post (for whom, supposedly, democracy dies in darkness) and the New York Times, both publications which are no strangers to highlighting the threat Donald Trump poses to a free and independent press, have been noticeably silent about Assange’s treatment and the blatant attack on the freedom of the press that it represents, and other mainstream outlets have not been much better. This news blackout is especially absurd given that both the Times and the Post, along with every single other major news organization, actively solicit leaks and classified information from anonymous sources (as they well should). Even more importantly, Assange involved these very same outlets in the dissemination of the Afghan and Iraq War logs, alongside The Guardian and Der Spiegel. Jeremy Corbyn remarked of this cynical duplicity: “The media that made so much of Wikileaks disclosures is now absent when it comes time to defend the journalist who was their source.”

It is largely thanks to the efforts of a few independent journalists that we know the true nature of the Assange show trial. It was a farce from beginning to end, lacking even the faintest veneer of legitimacy. Every morning, Assange was shaken awake at 5 a.m. and taken to the court, where he spent the rest of the day in a glass cage at the back of the courtroom, completely isolated from the proceedings deciding his fate. As if that wasn’t humiliating enough, Assange had to get on his knees to communicate with his lawyers through a slit in the box, their discussions audible to the entire court, including the prosecution (which is a violation of due process, if you were wondering). The violation of his rights to privacy and liberty did not begin with his extradition hearing, however. While Assange was trapped in the Ecuadorian embassy in London, he was spied on by the private security firm Undercover Global SL, which worked on behalf of the U.S. government to install cameras and microphones throughout the embassy and feed audio and video feeds directly to the CIA, including audio and video of Assange’s legal consultations. At one point, officials even discussed the possibility of poisoning Assange.

While criminality has no bearing whatsoever on the principle of due process, it must be said that Julian Assange is not a criminal. Julian Assange’s work with Wikileaks has been an unmitigated good for democracy and transparency. The real reason, of course, that Assange is facing such concerted persecution is because his journalism has presented incontrovertible proof, to the U.S. public and to the world, of the moral depravity of the U.S. government. For the powerful, this is a crime that cannot go unpunished.

We should take a moment to remind ourselves of the immense good Julian Assange has done, for which his reward is persecution and psychological torture.

Thanks to Julian Assange, we have the Afghan and Iraq War logs, which provided further proof of innumerable war crimes committed by the U.S. and its allies in Iraq and Afghanistan. John Sloboda, co-founder of the Iraq Body count, testified during Assange’s extradition hearing that the Iraq War Logs make up the “greatest contribution of public knowledge about civilian casualties in Iraq,” with nearly 15,000 deaths reported that had previously been unreported. In one of the more infamous leaks, a blood-chilling video known as “Collateral Murder,” we see the crew of an Apache helicopter firing on a crowd of civilians on the streets of Baghdad, laughing gleefully at the deaths of eighteen people, including two Reuters journalists. Dean Yates, chief of the Reuters’ Baghdad bureau at the time, said that it was only through the Wikileaks revelations that the truth about the deaths of his colleagues came to light.

We also know about the case of Khalid El-Masri, a German citizen, who was kidnapped and renditioned to a CIA black site, where he was brutally tortured for half a year (his torture ranging from extended periods of total sensory deprivation to sodomy), only to be abandoned on a remote road in Albania, blindfolded, once the CIA realized he wasn’t even the individual they were looking for. Documents leaked by Wikileaks revealed that the German government did not pursue accountability against the CIA operatives because the U.S. government pressured them into dropping the matter.

More recently, in 2017, Wikileaks published a cache of documents known as Vault 7, which details various CIA surveillance and cyber-warfare projects, including their ability to compromise smartphones, smart TVs, cars and web browsers.

And this list could continue, page after page. There is an entire decade’s worth of high profile leaks published by Wikileaks, all of which have contributed immeasurably to the public’s knowledge of the U.S. government and its conduct at home and abroad. As Noam Chomsky put it in his written testimony, “Assange performed an enormous service to all the people in the world who treasure the values of freedom and democracy and who therefore demand the right to know what their elected representatives are doing.” The bottom line is that if you have criticized President Trump anytime over the past four years for his attacks on journalists or the freedom of the press, you should care about the fate of Julian Assange. If he is extradited, his trial and inevitable conviction will signal the evisceration of even the pretense of a free press in this country. The imprisonment of Julian Assange will be yet another blow to the ability of journalists to hold the U.S. government accountable for its crimes, past, present and future.