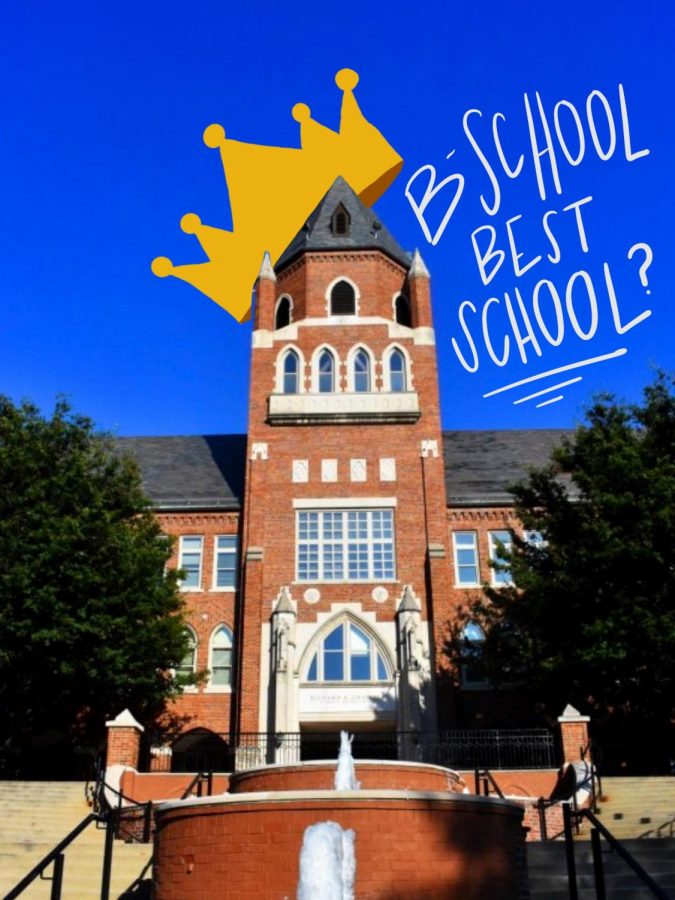 The Chaifetz School of Business of Saint Louis University stands as a monument to capitalism, free trade and profit. In terms of sheer size, Cook and Davis-Shaughnessy Halls dominate campus around the clock tower. Comparatively, the buildings that make up the College of Arts and Sciences are a bit small.

This difference didn’t really bother me for the first few years I attended SLU. I chalked up the B-School’s fanciness to the fact that an entire college was housed in one building. Over time, however, I’ve become a bit bothered by some of the stark differences between the College of Arts and Sciences and the Business School.

While the College of Arts and Sciences offers over 35 majors to undergraduates, the Business school only has 11 options for undergraduates to choose from. Despite this wide disparity in the number of programs offered, business students seemingly have more resources at their disposal to succeed after graduation.

While every undergraduate has access to SLU’s Career Services office based in Griesedieck Hall, business students have exclusive access to the Valerie A. Davisson Career Resources Center. Here, students are able to access excellent career opportunities with companies such as Boeing and McDonnell Douglas.

Meanwhile, the best career advice students receive from SLU’s Career Services is a crash course on how to use Handshake, a website which is assuredly simple and almost exactly like LinkedIn. Keep in mind that SLU also just spent millions of dollars to move Career Services to their new location. And for what? The last time I made an appointment for career advice, I was given a flyer on how to make a good resume and essentially left to my own devices.

Business students also have access to the “Centers of Distinction” located in the business school. These include the Center for Entrepreneurship, the Emerson Leadership Institute, the Center for Supply Chain Excellence and the Boeing Institute of International Business. While there are certainly many clubs and organizations available for other students to engage in, these clubs don’t receive the kind of funding and opportunities that these “Centers of Distinction” do.

Program differences aside, the Business School itself is just cooler. Students are immediately greeted by an electronic building directory as soon as they enter, office chairs are used in every classroom and it has a beautiful atrium for students to hang out and chat with one another.  There are, however, more questionable aspects that separate the business school from other areas on campus.

If you’ve ever been in a classroom in the Business School, chances are that you’ve noticed the extra lock near the bottom of each door. The point of these locks is so that anyone can duck below the grated window and secure the door in the event that a “violent intruder” enters the building. That’s right: business students have access to an extra layer of safety in an active shooter scenario. As far as I know, no other building on campus has these locks.

On top of that, signs advising students on what to do in case of an intruder are hung up around the entire building. Not only are business students afforded an extra layer of security just for choosing their particular area of study, but they’re also provided extra instructions on what to do in the event of an active shooter on campus.

The College of Arts and Sciences is by no means small: according to SLU’s website, there are currently 2,301 students in the college. In 2012, the Chaifetz School of Business had a total enrollment of around 1,900 students. So, despite each college having a similarly sized enrollment, large discrepancies in access to resources remain. So, the question remains: why do these stark differences exist?

Money. The business school was recently renamed in honor of SLU alumnus Richard Chaifetz, who gave $15 million to exclusively benefit the college. In 2018, Rex and Jeanne Sinquefeld gave $50 million to SLU, a large portion of which went to creating the Sinquefield Center for Applied Economic Research in the business school.

Like any institution of higher learning, SLU has to make money in order to survive and grow. It relies on donations from its alumni to expand and improve its academic programs.  The danger in allowing donors to choose what to invest in, however, is that it will inevitably result in a disparity in the quality of education students receive.

It is no secret that SLU has recently sought to shrink its liberal arts offerings. Meanwhile, STEM and business programs continue to improve and expand. As society fills with more doctors and corporatists, what will happen to the writers? The artists? The journalists? The politicians?  The historians? What will happen when we, as a culture, value making money more than seeking truth and bettering ourselves?

As a Jesuit university, SLU advertises educating the whole person. Yet, the administration guts the very programs it says it holds so near and dear to its heart. It flaunts “Jesuit values” while tokenizing Black and Brown students. It builds obnoxious service clocks to advertise its “commitment to the community.” In reality, SLU only cares about making money. That’s all there is to it.

As a result, my education and the education of thousands of other students is brushed aside and tarnished. As a political science major, my dream is to make a positive impact on the lives of as many people as possible. I don’t seek to make vast amounts of money.  Chances are that I won’t be able to donate a lump sum of $50 million back to SLU someday.  Because of that, the administration refuses to invest in my future in the same way that they would for a business student.

The hypocrisy at the core of the SLU administration is evident. Dr. Pestello and his colleagues in the administration say one thing but mean another, and ultimately only reward those who see the world in the same way that they do.  As we seek to hold the university accountable to its mission of social justice, we must be diligent in calling out injustice when we see it. We must call for transparency into our schools finances. We must demand that our school upholds the ideals it sanctimoniously flaunts. Together, we can change SLU for the better.