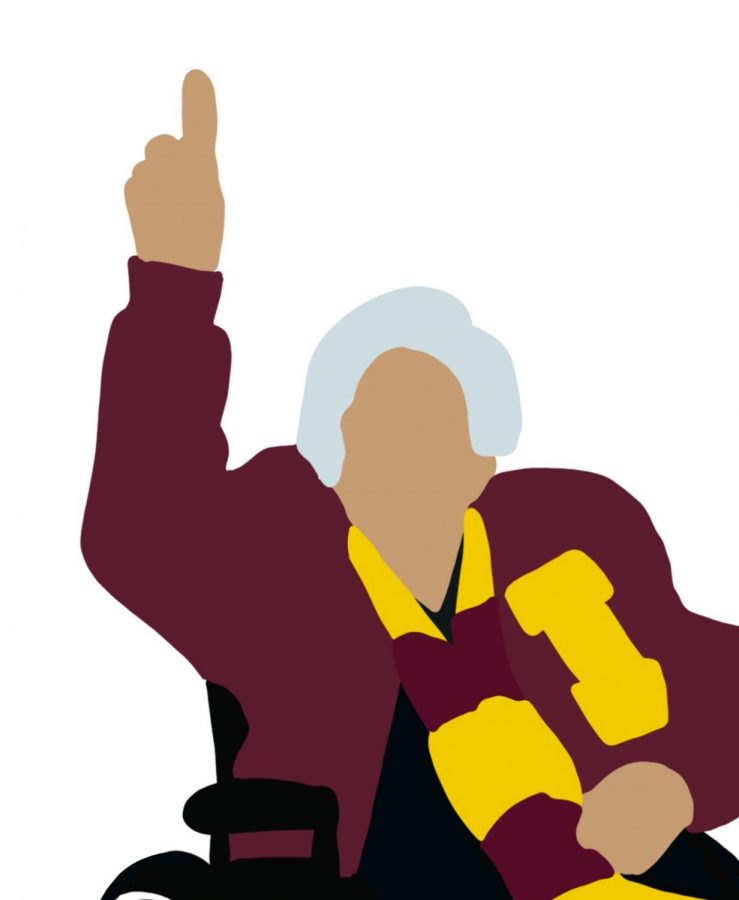 Loyola-Chicago has a secret weapon. It is not their experienced coach, Porter Moser. It is not their nation-leading defense. It is not even their offensive leader. In fact, it is not a person who is listed on their staff. Instead, it is a formidable 5 foot tall, 101 year-old nun named Sister Jean.

By now, she has been working with student athletes for decades. She was made the team’s chaplain and has been with them through their highs and lows throughout seasons past. Sister Jean accompanied the Ramblers to their 2018 run to the Final Four where they would be bested by Michigan. The number 8-seed Ramblers have already pulled off a miracle —taking down 1-seed Illinois, and many suspect it comes from their personal miracle worker.

Sister Jean’s role as chaplain is to guide them in prayers before their games and provide them advice. But Sister Jean’s role does not simply stop there. She loves basketball. She scouts the teams, gives the players valid advice and gives the team support from the sidelines. She can often be found wearing a varsity jacket accessorised by a maroon and gold scarf. In the latest pictures of Sister Jean, she seems to be dipping her feet into the world of fashion, putting on matching gold and maroon Nike sneakers.

Simply put, Sister Jean is a beacon of light with the Ramblers basketball team. She has encouraged them to keep their grades up and stay NCAA compliant, while also guiding them spiritually and emotionally. In order to travel and attend the team, she received her COVID-19 vaccinations. At 101-years-old, she gives credit to the young people she serves for keeping her heart so young.

She has taken the country by storm and has become the recognizable face of Loyola-Chicago basketball. Basketball fans from around the country know who she is and respect the impact and importance of her presence in March Madness. It seems almost normal now that when Loyola-Chicago takes down yet another highly seeded team, fans assume it was the power of Sister Jean’s prayer that lifted them there.

The Rambler’s nun may be the sense of normalcy they need to complete their run to a national championship. Outlets have strayed from calling them a Cinderella team this time around—their 8-seed took care of that. This time, the Ramblers are more well known, thanks in part to Sister Jean. They have a chance to take the opportunity of a college player’s dream—win a national championship ring, a treasure Sister Jean will certainly cherish.

Sister Jean’s pregame prayer has been said to add the extra bit of heart the team needs. In fact, she called out Illinois’ weakness and encouraged the players to capitalize on them—with God’s help of course. This week they will take on Oregon State, a 12-seed they will certainly not take lightly. With the help of Sister Jean’s scouting, expert pre-game prayers and a little extra comfort, Loyola has the chance to be crowned the champion right in front of their number one fan.

There is nothing quite like college basketball. Every team has its thing. For the Rambler’s their thing is a who and that who is pretty important. Sister Jean’s century might just have given her words the extra miracle power they need to help the Rambler’s work pay off. Regardless of the outcome for the Ramblers in this tournament it is nice to see somewhat of a return to normalcy. Sister Jean accompanying the team to Indianapolis has been a welcome sight for fans, even if she is an ominous sign for the Rambler’s opponents. But in all, Sister Jean’s magic words seem to have the power to help Loyola win the big games. That power will certainly have LCU fans thinking, “Ramble on, Sister Jean!”