What Are the Women Wearing?

Why the newest Nike drop is so important 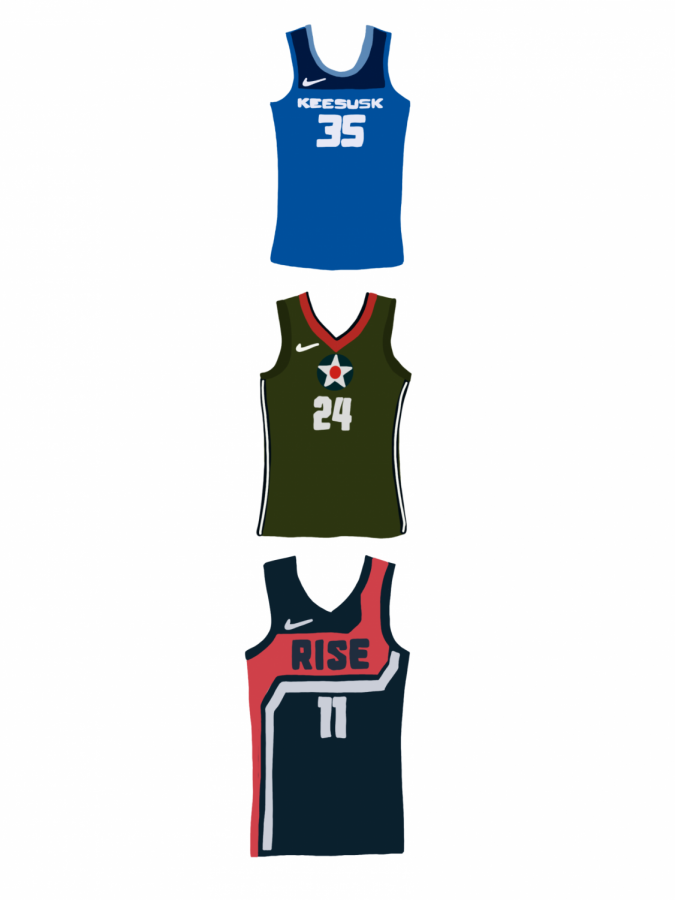 Throughout the past five years, the WNBA has undergone a serious revolution. It’s not just that their prominence has risen, or that their draft picks have  gotten increasingly more impressive and it is not even that they have continued to sign better contracts with ESPN for coverage. Instead, it has to do with something deceivingly simple: their uniforms. When the 2016 draft took place and the pictures of the first round picks were released, there was a detail on the uniforms that was suddenly strikingly obvious: the names of sponsors were larger than the team’s logos.

This was a stark contrast to the NBA. Teams across the league had logos that spanned their entire chest. Some had logos and the names of their teams. There were alternate jerseys. There was not a sponsor to be found on the men’s uniform. In fact, even high school and college teams had the honor to play for their school without product placement interfering. The WNBA, comparatively underfunded, sold space on team’s jerseys to keep the teams outfitted.

In 2015, Nike signed a deal with the NBA making them the sole company creating uniforms for the league. The same year, the WNBA was afforded the same deal and all teams transferred to uniforms with a swoosh. But, almost immediately, Nike began work on different kinds of uniforms. The NBA was given city uniforms that pay homage to the place that hosts them. Plenty of teams have more than a third jersey option. The WNBA had two—home and away.

That changed on April 8, 2021. Nike announced and released new jerseys for all 12 teams of the WNBA. All of them would fall under the acronym H.E.R.—Heroine (home jerseys) Explorer (away uniform) and Rebel (city) editions. For the first time ever, sponsor logos have been removed from the jerseys. The priority is now the team and the team’s colors. Now, the WNBA has also been afforded city jerseys, reminiscent of some of the most popular jerseys in the NBA.

It is also important to note that there are specific touches that Nike has been working on for years in order to make this happen. For the first time, the women will have the chance to choose a neckline on their jersey. Knowing the body type of the professional athletes, Nike has created a new template for shorts that allows for more space through the thighs and glutes. The jerseys will have large arm holes and wider body panels to accommodate the muscularity of the women.

While all l2 teams have unique stories behind their third options, there are three that are remarkably unique. The first is that belonging to the Connecticut Suns. The team plays in Mohegan Arena, owned by the Mohegan tribe. They are the only professional team in sports that has proper affiliation with a Native tribe (looking at you, Washington Football Team and Kansas City Chiefs). On their third jersey, the word “Keesusk” spans the chest. Keesusk is the Mohegan word for sun. The pattern that adorns the sides is the Mohegan “trail of life.” Their other two jerseys also feature Mohegan patterns.

The Dallas Wings third jersey is also exceptionally noteworthy. Texas manufactured the P-40 Warhawk during WWII. What’s more? The plane was flown by Women Airforce Service Pilots, the famous WASPS, during testing. Militaristic in design, the jersey features a military green (certified military-grade) base, accompanied by a white star with a blood-red circle in the middle of it.

Finally, the Washington Mystics pay homage to being the home of liberty in the U.S. with their third option. The word “RISE” replaces the Mystics moniker. Under RISE, is an odd, almost tracing shape. It is the path that the Women’s March takes throughout downtown D.C. Printed overtop the path are the words of the 19th Amendment. There are other important pieces that pay homage to the women’s history that have taken place in the nation’s capital. With the  passing of D.C. statehood legislation in the House, the Rebel edition for the Mystics has especially important meaning.

Nike is one of the few athletics companies who have continuously tried to make places for women and change with the times. This new uniform collection stands as the pinnacle of Nike’s engagement with women to date. It is an important message to other female professional athletes as well as young girls who are looking to get invested in women’s sports. Another perk of this new collection with the WNBA is that Nike has released it in bulk on their platforms. It is the first time a jersey from all 12 teams is available on the Nike website. Additionally, team merch is also more widely available on the website.

For some, this is far over-due. For others, the intent, details and planning that have gone into this release make sense. What is for certain is that it has been well received by the women throughout the league and has given women’s sports hope. For years, women’s uniforms have been startlingly similar to men’s uniforms. Now, the new dawn of women’s athletics says that women’s bodies deserve outfitting made specifically for women. Nike has taken it into their own hands to make sure they are a part of that change—something especially comforting for women who have spent large parts of their career without much recognition.