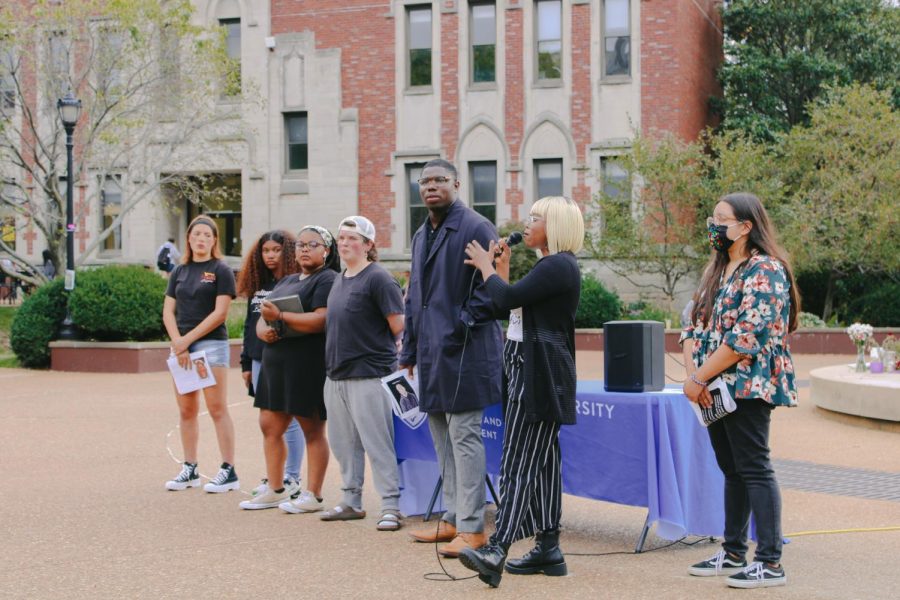 In the early hours of Oct. 13, 2014, two months after the police murder of Michael Brown in Ferguson, Mo and just a week after the police murder of VonDerrit Myers Jr. in St. Louis, a group of nearly 1,500 protesters marched down Grand Boulevard where they were met with a long line of riot police. Shortly after, another group of protestors approached from the opposite side of the road. The police were forced to retreat, and as a result, the group, which split earlier in the day, reconvened by a SLU entrance.

Out of the large crowd emerged then SLU sophomore Jonathon Pulphus, who invited the group onto campus as his guests. This moment marked the beginning of the historic six day sit-in at the University clock tower, eventually known as Occupy SLU.

Seven years later, the University continues to commemorate the occupation’s anniversary. This year, the Office of Diversity and Innovative Community Engagement (DICE), in collaboration with Campus Ministry, hosted several local guest speakers in events that ran from Oct. 8 through Oct. 15. To begin the commemoration week, a procession took place on campus which was followed by a panel discussion from Kayla Reed and Kira Banks, Ph.D., who were both present during the occupation. VonDerrit Myers Sr., a SLU employee, also spoke alongside them about his son’s life and story.

With permission from his family, organizers led several protests like Occupy SLU in Myers Jr.’s name in October 2014, which was dubbed as “Vontober” to remember him. During the occupation, many SLU students and faculty joined community members from across the St. Louis area as a unified front.

“Without the community work and without the streets, Occupy SLU would not have been possible,” said Pulphus, who led a reflection session during the commemoration week. “Part of our mission was to pop that SLU bubble. We were successful at that quest, but the jury’s still out on the question of how serious SLU is taking and navigating the promises that were made in the Clock Tower Accords today.”

The 13-point Accords were developed through conversations between students, staff, activists and administration leaders, ending the weeklong peaceful occupation in 2014 and committing the University to enacting equitable changes. Pulphus noted that months prior, in May 2014, a group of students submitted a list of demands to the institution after a few racialized incidents occurred on campus. That initial list, he says, helped lay the foundation for the Accords.

“We are building a team now to re-imagine the Accords and ensure that our 2021 vision is in alignment with what is currently happening, and to renew [our] commitment and investment in DICE,” Interim Vice President of DICE, Amber Johnson, Ph.D. said.

Some of the programming during the week included an Activism 101 workshop led by Ferguson protestors Brittany Ferrel and Jamell Spann and the annual reading of a speech that Dr. Martin Luther King, Jr. delivered to the University in 1964. Luella Loseille, Cross Cultural Center coordinator, led the “Say Their Names” event in which students read the names of dozens of victims who lost their lives due to police brutality.

“Standing up here and reading these names really hits home for me as an African American,” senior Justice Hill said. “A lot of times we make adjustments as a way to survive, but I am here to tell y’all that I don’t want to survive—I want to live. Don’t leave this message here. Take it back to your classrooms, take it back to your professors and friends because this is real.”

The commemoration week also aimed to celebrate the legacy of the late Jonathan Smith, Ph.D., who was a notable figure during the occupation and the formation of the Accords. As president of The Black Rep Board of Directors, Smith wrote Do I Move You?, a play based on a collection of poetry, music and dance which was shown Oct. 13 in his honor.

In another speaker event, “Ferguson and Tikkun Olam,” Rabbi Susan Talve and Jeffery Dhoruba Hill shared their experiences during the Ferguson protests and Occupy SLU.

“You all are celebrating and commemorating this event today, and I want to stress the point that you don’t have to be this huge special person to implement change or to have an effect,” Hill said. “I was a homeless person with five friends, and we were able to organize Occupy SLU.”

When the original Occupy SLU sit-in occurred, there were a range of opinions within the SLU community about the protest. Many parents and students criticized SLU President Fred Pestello for allowing the sit-in to occur. The movement’s legacy, however, lives on as a powerful event that shifted the University’s culture.

“While we have a long way to go in terms of institutionalizing anti-racism and anti-oppressive environments, I am seeing progress and feel good about what is possible,” Johnson said.