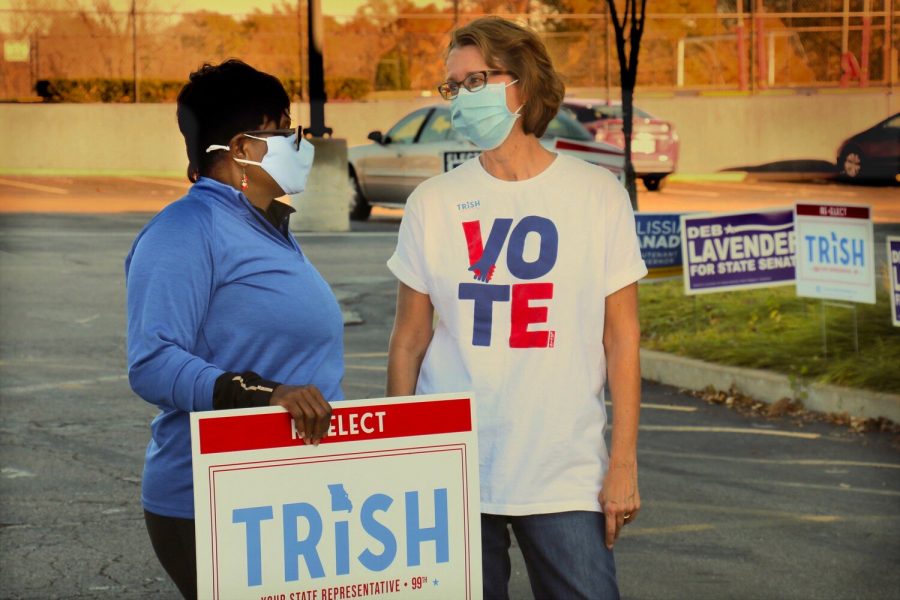 Just outside of St. Louis City is Missouri’s Second Congressional District where Representative Trish Gunby is running for election. Rep. Gunby has served Missouri’s House of Representatives 99th district since 2020 and on August 2, 2021, she announced her run for the second congressional district’s United States House seat. “I was, and am, very happy to serve as a state representative. But I will tell you after January 6, what happened at the capital, that event sort of shifted everything,” Rep. Gunby mentioned as one of her reasons for running.

Both the insurrection and Michael Brown’s death in 2014 changed a lot for Rep. Gunby. During these events, she did not feel represented by incumbent Representative Ann Wagner, who has held the seat since 2013. “I haven’t felt a sense of representation,” Rep. Gunby said. “Part of this job is to represent everybody and we all aren’t going to agree, but to close off that option in terms of face-to-face communication or even phone call or email communication. People just want to be heard.”

My attempt to reach out to Rep. Wagner received no response. Rep. Gunby shared how she receives calls and emails from people who need federal assistance, but can’t get through to Rep. Wagner. In comparison, on her website, Rep. Gunby has a Google Form anyone can fill out. Despite not having the same resources as Rep. Wagner, Rep. Gunby still makes an effort to read through the responses. Upon securing a potential election win, Rep. Gunby said that the first thing on her agenda would be to hold a town hall where members of the community will be heard. “We may not agree on everything, but I still will serve them,” Rep. Gunby said.

Rep. Gunby strives to represent her constituents; however, she stands by her principles. On her website there are five major issues that she focuses on which include universal, affordable healthcare, good wages and good jobs, social equity and racial justice, constitutionally-endowed voting rights and a transparent, functional government.

One of the first issues I talked to Rep. Gunby about was racial justice. She took the time to educate herself since the shooting of Michael Brown and even led a church seminar on diversity and social justice. “A lot of what we do is legislation. We’re in D.C. 100 days a year, but you’re at home 265 days a year. I think a big part of the job is to set up events and opportunities to bring in experts to deal with tough subject matter and to educate and inform your constituents,” Rep. Gunby said.

From there I inquired about other issues important to me, starting with gun control. “Many times Democrats get labeled as ‘we’re gonna take your guns,’” Rep. Gunby shared. “We advocate for common-sense gun solutions and a reduction in gun violence. I believe what that looks like in this region is universal background checks, what they call red flag laws where individuals who have been convicted or suspected of domestic violence would not have access to weapons.” As a state representative, she supported the idea of individuals receiving tax credit upon purchasing a gun safe in order to incentivize gun safety.

Climate change is another large issue for me, and Rep. Gunby elaborated  on where she stood.“It’s happening!” Rep. Gunby exclaimed. “I’m tired of living through hundred-year floods that happen every five years. It’s obviously happening and the U.S. needs to be a leader in it. We need to see things happen sooner rather than later.”

With all the talk right now about abortion rights, as a woman I also wanted to find where she stood. “I am a pro-choice candidate. I believe in a person’s right to choose,” Rep. Gunby stated. “I am worried about the legislation that I see moving through state legislatures trying to undo Roe v. Wade.”

Even if Rep. Gunby’s beliefs don’t align with yours, you should still consider supporting her because of her ability to listen to opposing viewpoints. This same engagement is not reflected with Rep. Wagner, who has shown to be virtually absent.

Missouri’s second congressional district is very competitive and mixed, which highlights the extra work she must put forth to flip the seat. “I’m two months in and we are already doing the work necessary. We did it at the state level and we will ramp up and require more volunteers, more money, more engagements, more digital ads, everything is more,” Rep. Gunby said. “We have already started door knocking. We have door-knocked over 2,500 doors.”

She emphasized that “A lot of the students may not be from the St. Louis area but they are wanting to do stuff and certainly during election time next November, you’ll all be back in school and we will need more people than ever to help us in this effort since we will likely not know the boundaries for this district until late winter next year,” Rep. Gunby said. “I’m excited that you’re interested and I would love to have as many SLU students as possible on my team. They can go to my website trishgunby.com and sign up to volunteer and members of my team will reach out.”