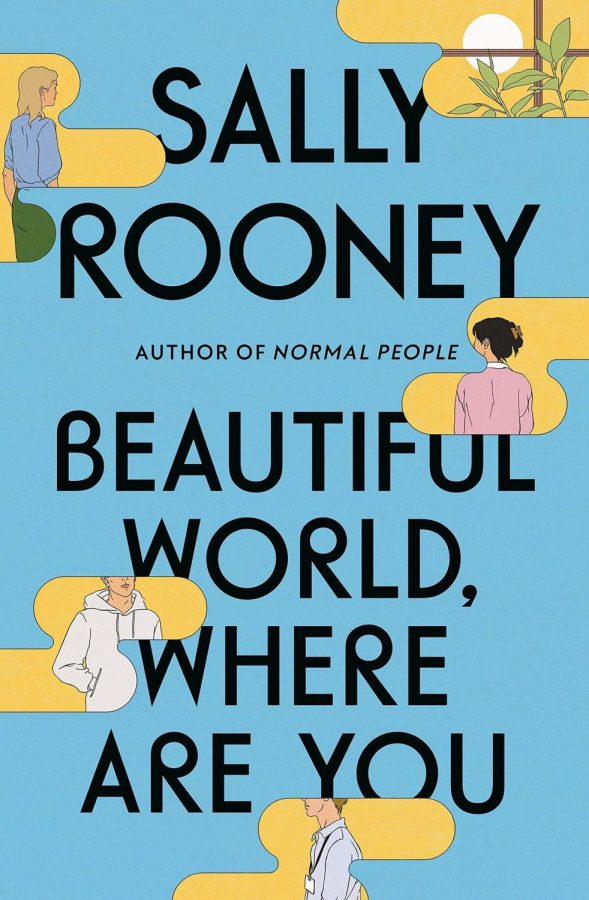 In her third novel, “Beautiful World, Where Are You,” Sally Rooney takes a step back from the speed and momentum of her first two novels, “Conversations With Friends” and “Normal People.” Though she seamlessly moves between characters and cities, much of the story maintains a certain degree of stagnant restlessness, which I believe to be part of why this latest novel is my least favorite yet.

That said, I’m in love with it.

Rooney’s two main characters, Alice and Eileen, are both 29; Eileen works as an editorial assistant and Alice as a novelist, adopting Rooney’s career in her fictional world. Though best friends, the majority of their correspondence happens through emails since they live in different cities. Still, the messages feel more like thoughtful letters. And if the emails are letters, the in-between bits of plot often feel like reading someone’s notes, fluid and reflective, taking full shape and thought in their emails.

Both women fall in love over the course of the novel, in differing but still distinguishably modern ways: Alice with an initially bad Tinder date, Felix, and Eileen with a childhood friend, Simon, that had been a fling about ten years back. Regardless of the physical presence each of these men have in their lives, both maneuver through the bulkiness and at times awkwardness of technology’s position in their relationships. Before Simon and Eileen actually sleep together, let alone spend substantial time alone together, they try out phone sex. While it may seem abrupt, Rooney is instead able to continue demonstrating the intimacy of sex and desire that her first two novels showcase.

Alice and Eileen fumble through their romantic relationships which possess very little linear and structural shapes, something Alice finds valuable:

“But what would it be like to form a relationship with no preordained shape of any kind? Just to pour the water out and let it fall.”

This was said in an email from Alice to Eileen regarding her still indecipherable relationship with Felix, but I think it reads better in relation to Alice and Eileen’s friendship. At the heart of this novel, there’s a sore kind of love pouring out from both of these women who may as well be sisters. They’re valiantly obsessed with and mesmerized by each other, which can sometimes translate into hurt and neglect. They’re anxious and curious about the world, resisting change, though they know how necessary it to be:

“‘I just want everything to be like it was,’ Eileen said. ‘And for us to be young again and live near each other, and nothing to be different.’ Alice was smiling sadly. ‘But if things are different, can we still be friends?’ she asked. Eileen put her arm around Alice’s shoulders. ‘If you weren’t my friend, I wouldn’t know who I was,’ she said.”

And I can’t help but think of my own friends when reading scenes like this. We are all at the cusp of graduating and “entering the real world,” whatever that might mean, but we’re fighting like hell to preserve the present moment. We take on each other’s anxieties and grievances as our own: heartbreaks and student debt and illnesses and family troubles, as well as our joys: confessing our crushes, landing jobs, travelling to new places. We’re giving each other articles and poems and books with our writing in the margins to read. And TV series and TikToks and songs and movies to listen and watch. Isn’t that lovely, intimate, even?

We’re struggling with the push and pull of friendship. We are equally completely dependent and in need of each other as we are resistant to that need. We want so badly to be helped and be needed by the other, but when we need to use that help for ourselves, we turn shy. And though we’re desperate to, we can never claim that we fully know each other, though so much knowingness is involved in our love.

Rooney has been criticized in the past for having “plain narration,” but it’s obvious her writing style demonstrates great genius. She’s able to capture characters and relationships in all their complexity with minimal words, and sincerely invites you to the table to join them. Through religion, lack of religion, world issues, personal issues and the varying forms that love and friendship take, she settles into the void of the unknown and the inevitability of change. Despite all the anxieties her characters face, at the very least they’re “…excited to feel that it’s going to continue, that new things will keep happening, that nothing is over yet.”

It’s as horrible as it is beautiful, and it makes saying goodbye nearly impossible.