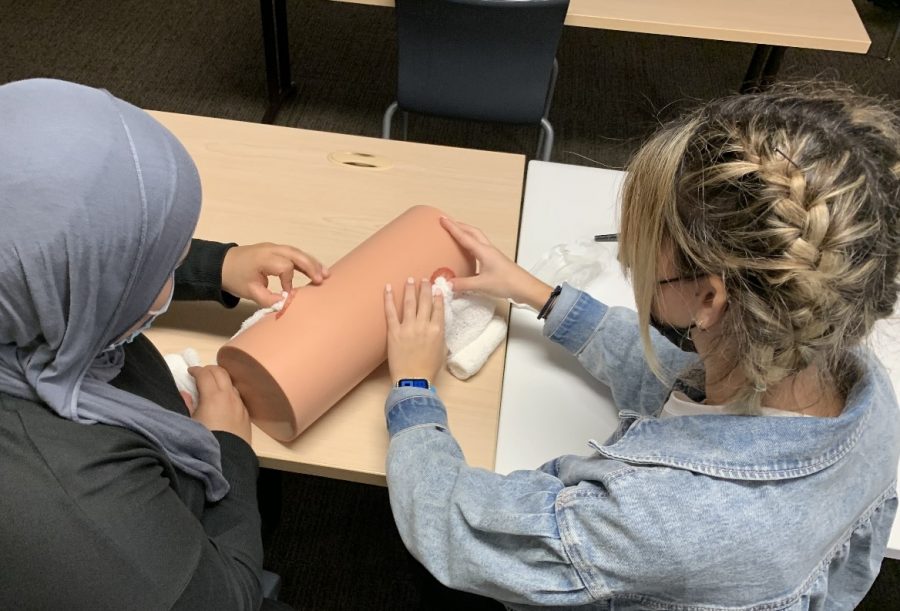 On November 12, the American Medical Women’s Association (AMWA) visited the injury prevention center that collaborates with Barnes Jewish Hospital for training on how to stop bleeding in an emergency situation, known as Stop the Bleed. This organization began when former Navy Captain, Frank K. Butler shared the techniques he used to stop bleeding during his service. His bleeding prevention technique includes using a tourniquet, which was not common at the time. Previous techniques that have been used to stop bleeding were packing the wound and applying pressure.While these methods are effective in saving a life,  they are even more effective when the process includes a tourniquet. This method was quickly approved by the American College of Surgeons Committee on Trauma (ACS COT) after being studied and included in the Tactical Combat Casualty Care (TCCC). Due to its high efficiency, today it is standard practice to use a tourniquet along with packing gauze and applying pressure to conserve as much blood as possible.

The presentation began with identifying the ABC acronym:alert 911, bleeding (finding the source/wound) and compression. These basic steps allow for a clear  and comprehensive way of treating an emergency bleed. Due to its simple wording and actions, this method can decrease the chances of losing a life by intervening with uncontrollable bleeding. The trainer also demonstrated how to use a tourniquet if it was available in the  situation. Finally, the members of AMWA were able to practice how to pack gauze and apply pressure on a wounded dummy. They also practiced using a tourniquet on each other.

“Even though I knew the basics about bleeding, I learned that the slightest intervention could save someone’s life,” said Inis Nurishmi, a member of AMWA studying health science.

“It was informative in that we learned new material but also that we could physically practice with each other, so it was more hands-on. I learned how to use a tourniquet which was surprisingly so simple that literally anyone can use it to save a life.”

This method is directed towards individuals who have basic knowledge in the medical field. Due to its simple steps and easy-use equipment, this method can be used by anyone to save a life. This method has been highly promoted ever since the 2012 mass shooting in Sandy Hook Elementary School, in which medical professionals said many of the victims could have survived if there was proper training amongst bystanders. Shortly after, the Stop the Bleed consensus was launched and has trained thousands of people.  The training is free, making it accessible to anyone.

To make it even more accessible, the Stop the Bleed consensus has made the course virtual. They are also open to sending their members to clinics or hospitals in areas that lack resources regarding similar training. Group training is also possible with flexibility around schedules. Using their website, one can even offer to conduct a training course if they have been trained prior. The practicality of this course makes it so no one can miss out on learning an important skill that can be used to save someone’s life.