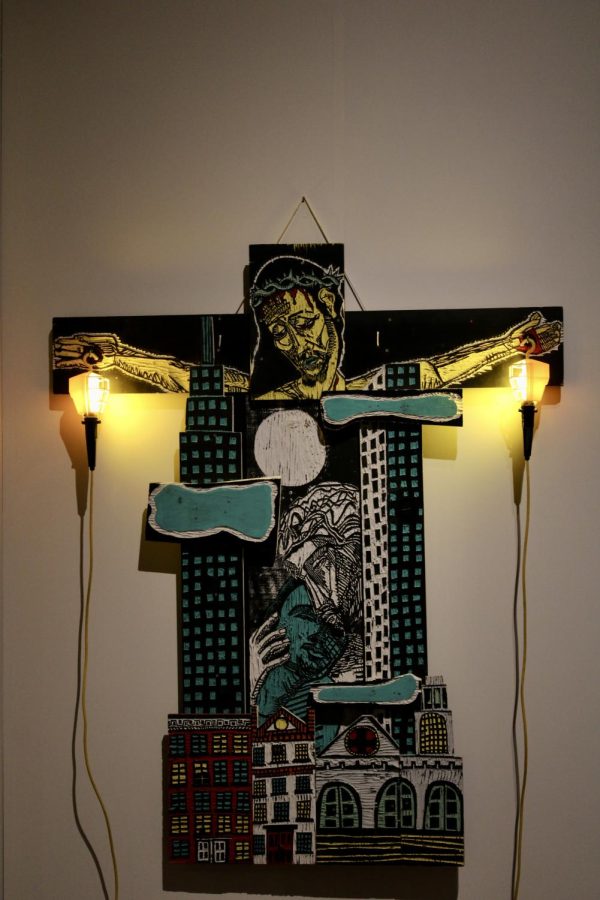 A new exhibit is on display at Saint Louis University’s Museum of Contemporary Religious Art (MOCRA), aiming to showcase the range of the human condition.

Titled “Double Vision,” the exhibit features works from the collections of three museums based at Jesuit universities and includes artists such as Keith Haring, Kara Walker and Andy Warhol. The exhibit, which debuted on Feb. 16 and runs until May 22, is open to members of the public free of charge.

The 28 artworks in the exhibit are arranged in pairs. Those couples, selected to embody a secular value, such as “Courage,” “Honesty” or “Justice,” are sorted throughout the space to represent the 14 Stations of the Cross.

“My hope would be that out of these 14 themes and 28 works of art, there is going to be at least one—hopefully more—of those themes that resonates with folks,” museum director David Brinker said.

In total, the works span over five centuries and a wide range of genres, leading to sometimes surprising pairings. The oldest, an illuminated manuscript by the Early Netherlandish painter Willem Vrelant made in 1470 A.D, is matched with a 1999 painted wood carving by American folk artist and santero Nicholas Herrera. Together, those works serve to exemplify the ideal of “Compassion.”

“This is a highly eclectic show,” Brinker said. “There’s something, I think, for every kind of artistic taste.”

First shown at Marquette University’s Haggerty Museum of Art from Aug. to Dec. of 2021, the exhibit is the result of a collaboration between SLU, Marquette and Loyola University Chicago which began in Feb. 2020. “Double Vision” is co-curated by Brinker and Haggerty curator Lynne Shumow.

“Double Vision” is the second time that MOCRA has showcased either a Haring or a Warhol, Brinker said. In 1995, the museum featured “Altarpiece: The Life of Christ,” Haring’s last work, and it displayed Warhol’s “Silver Clouds,” a group of 40 to 50 large balloons, in 2001, 2002 and 2006. The works currently on display are a marker drawing by Haring, made on a 1983 visit to the Haggerty, and a 1966 print by Warhol of First Lady Jacqueline Kennedy.

“We want people to enjoy the art, but this is a space where they can go deeper, if they want to.”

“This is a lot less work to put up than blowing up balloons every day, which I did a lot of,” Brinker said.

Many of the artworks deal with despairing episodes in history: the slave trade, the AIDS crisis, wars in Vietnam, Central America and West Africa. But the exhibit concludes with the message of “Hope.”

“That’s what we want MOCRA to be,” Brinker said. “We want people to enjoy the art, but this is a space where they can go deeper, if they want to.”

One painting, the abstract, vertical “Red Sea” by Trinidadian-American artist Gary Logan, is inspired by a lecture the artist heard as a graduate student. Logan recalled that when discussing J.M.W. Turner’s 1840 painting “The Slave Ship,” known for its depiction of enslaved Africans drowning to their death, his teacher made no mention of the gruesome scene.

When viewed from top to bottom, Brinker said, Logan’s painting has a “darker, more challenging, more pessimistic view,” starting with orange, then red, and finally fading into black. But when read in reverse, it tells a more hopeful tale.

Some of the works have a distinctly religious theme, such as Belgian artist Joseph Paelinck’s 1822 painting “Hagar and Ishmael in the Wilderness,” or Israeli artist Adi Nes’s 2006 photograph “Abraham and Isaac.” For others, religion still plays a role, Brinker said, though it may be more subtle, citing the influence of Christian iconography on Warhol as an example.

“For folks who experience a sense of spirituality or religion, there’s a whole lot of different ways to access that,” Brinker said.

Brinker said he hopes visitors are inspired by the exhibit even after leaving the museum.

“We’re presenting the themes in our works, and the invitation is for the visitors to take that in and then do something with that,” Brinker said. “Hopefully, it has some sort of impact on their life in some positive way.”