With The Fabulous Fox Theatre back in business, students can utilize the many benefits on offer. 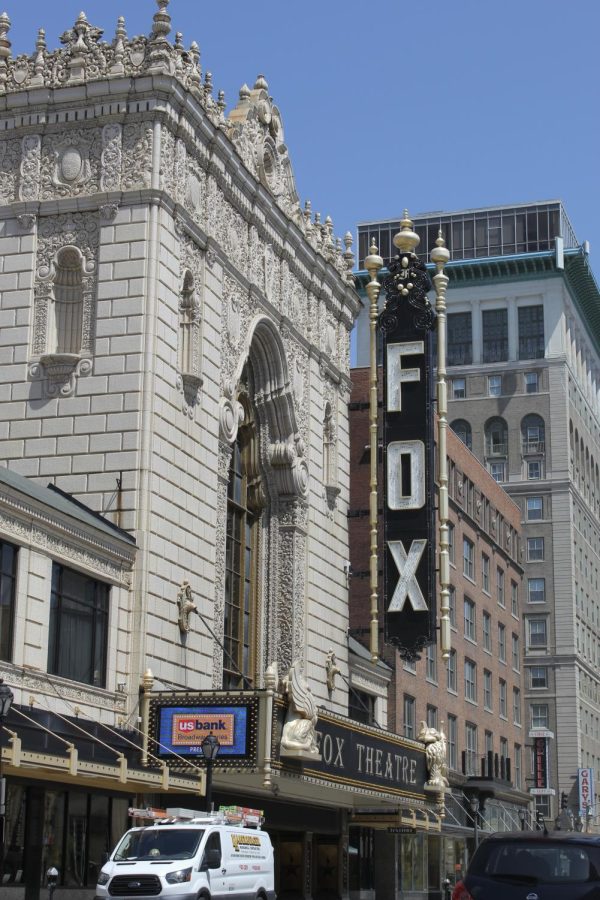 When it comes to Saint Louis University, there are certain milestones every student should try at least once: getting a latte at Fresh Gatherings, strolling through Forest Park on a Sunday afternoon, running through the Clocktower fountain and seeing a show at the Fox Theatre. Considering how close The Fabulous Fox Theatre is to SLU’s campus—a 15-minute walk at most—it seems like a crime for students to miss an opportunity that is so near to them!

In Fall of 2020, I was unable to experience the Fox Theatre because countless shows were postponed due to the pandemic, so when productions began to open up again, my friends and I were eager to experience the Fox for ourselves—and boy, did we! During these past few months, I have been fortunate enough to see not one or two, but three enjoyable shows at the Fox: “Mean Girls,” “Hairspray,” and  “Hamilton.” Each of these shows was a last-minute decision, and it’s safe to say that seeing these plays have been some of my fondest college memories thus far.

If you have never been to the Fox, I’ll paint a picture for you: it’s easily one of the most stunning theatres I’ve ever had the privilege of visiting. From the commanding red pillars, to the golden detailing and the magnificent chandelier that hangs in the auditorium, visiting the Fox will make you feel fancy, even if only for a night. Designed by the Aronberg-Fried Company in 1928, the building was inspired by various influences. The opulent lobby with plush red carpet and a high ceiling with beautiful designs takes after a building style called “Siamese Byzantine,” which comes from the structure of ancient Indian religious buildings. The 90-foot lobby is accompanied by tall columns that are inspired by Buddhist monastery halls.

The theatre itself is named after William Fox, the man who founded the famous production company of the same name, now called 20th Century Studios. Throughout his career, he worked to establish many Fox Theatres across the United States, which today are found in Atlanta, Detroit, San Francisco, Oakland, San Diego and, of course, St. Louis. Fox built the theatre in replacement of the Grand Presbyterian Church in order to ensure that “residents of St. Louis no longer need to look beyond their city for the finest in entertainment.”

The Fabulous Fox opened in 1929 with a film showing of “Street Angel,” where people paid 50 cents to experience this exceptional entertainment. The theatre has only grown in success with over 15 million patrons over the years. The theatre was once even home to St. Louis’s own dancing chorus line, called The Fox Tellerettes.

While there was a decline in revenue between the 1960s and 1970s that led the establishment to briefly close, a group of Fox Associates took matters into their own hands. Upon restoring the Fox Theatre in 1981, they aimed to return the building to its original 1920s glory. Led by director Mary Strauss, the theatre was reopened in 1983 as a performing arts center with renovations that allowed for more patrons with the legacy of the original building modernized. In 1983, the Fabulous Fox Theatre received the National Trust Honor Award in light of the excellent preservation and restoration that a small group of individuals brought to the historic building.

Over the years, there have been renovations and security improvements made to the lobby and the stage as well as the notable addition of the vertical sign that hangs outside of the theatre. The Fabulous Fox Theatre has remained a beloved establishment as it nears its 100-year anniversary.

While there were limitations due to COVID-19 at the end of 2021 and the beginning of the new year, the Fox Theatre is doing its best to return to normalcy. Masks were made optional on March 15 and proof of vaccination is no longer required. Currently playing at the Fox is “Hamilton,” which will run until May 15—Disney’s “The Lion King” will follow, which will run from June 1 to June 19.

Not only is the Fabulous Fox a convenient walking visit, but there are also deals exclusive to students as well! Students can sign up to have student rush news and discounts sent right to their email inboxes. There are also opportunities to go to the Fox and purchase RUSH tickets; all students have to do is arrive at the Fox Box office two hours prior to the show with a valid Student I.D. card.

The next time you are looking for a classic St. Louis outing with your friends, get dressed up, stay in the neighborhood instead and visit the Fabulous Fox Theatre.