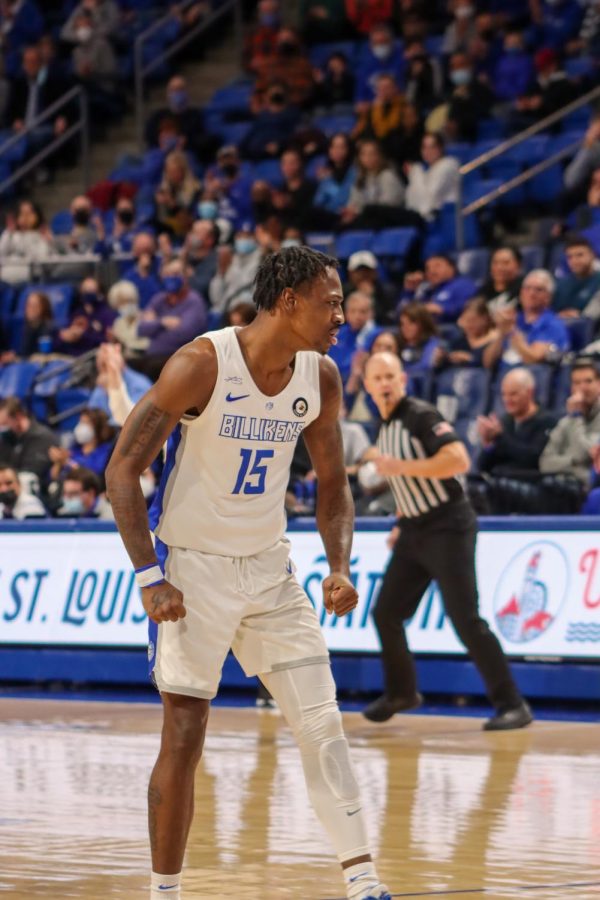 Before 2018, when college basketball players wanted to transfer colleges, they had to talk to their coach and administrators for their team. In 2018, it became much easier for players to transfer, though they would also have to sit out a year.

Now, the new “Transfer Portal” creates a more efficient way for current NCAA players to transfer. Players are able to inform the NCAA that they are going into the portal and ineligibility terms, they practically become a freshman again. Under the new ruling, they will not have to sit out a year and can play immediately.

This new transfer portal has a lot of athletes moving. Notable athletes are Baker Mayfield to Oklahoma, and Justin Field from Alabama to Oklahoma. This has brought about positive changes for many athletes who were unhappy at their current school. But this off-season has also brought about a lot of movement for the Billikens men’s basketball team.

Basketball season ended in March for the Billikens. They had made it to the NIT but suffered a first-round loss for the second year in a row. For some, this was to be expected. They would lose a tight game to Auburn (who would go on to have a 2-seed in the tournament); then, the Billikens lost to UMass who ended their season 15-17 after SLU blew a second half lead. The same story happened at a home game against St. Bonaventure, to whom the Billikens lost on the road. The Bonnies would go on to win in the A10 tournament. This also happened earlier in the season against Belmont and UAB.

After a season full of almosts, Rashad Williams, Andre Lortenson, Markhi Strickland and Jordan Nesbitt all entered the portal. The real twist came when assist leader Yuri Collins announced he would also be entering the portal. Thankfully, SLU was able to retain Collins.      On a positive note, the team will get Javonte Perkins back after an ACL injury at the beginning of the season last year. The team has lost Brandon Courtney and Marten Linssen due to graduation and DeAndre Jones to eligibility. That makes seven player losses and four to the portal after the transferring players have been at SLU for two years or less. Most of the players probably want to start next year with Perkins back as a small forward and Terrence Hargrove staying as power forward. Francis Okoro, the projected starting center has grown a lot this past year. Yuri Collins will man the helm of the Billiken offense as point guard, while Gibson Jimerson continues as shooting guard. Fred Thatch is a solid sixth man for Hargrove or Perkins, and Lassina Traore staying at SLU will give Okoro a sub. Other than that, the Billikens do not currently have a bench. Speculation abounds as to exactly why so many entered the portal in one year. One theory is that Coach Ford did not do enough development with his second string.

As for incomings, there is hope. SLU has Javon Pickett, a Mizzou transfer, and Nick Kramer from SLU High, along with Larry Hughes from CBC, Pattonville’s Kellen Thames and junior-transfer Sincere Parker. Losing four people is scary though, especially since these players are young, have a lot of potential and could have been good for the Billikens in the future. Also, all the pickups are guards when SLU is lacking in size, only having two big men and in need of a couple more for Ford to develop his squad. Travis Ford himself was a 5-9 point guard so he tends to like guards; in fact a couple of his past point guards are on his coaching staff.

This will likely be a make-or-break season for Billikens basketball. It has been tough to watch the Billikens plateau after a lights-out 2019 season. Hopefully, later in the spring, Ford can get a big man from the portal. Without a bench, later-in-the-year injuries could hurt Ford’s chances of making it back.

The loss of women’s basketball head coach Lisa Stone showed that the Billikens’ athletics administration is looking to the basketball programs to make a statement. After not making the women’s NIT tournament, administration deemed it time for a change. Athletic director Chris May has stated that he wants to make it to the tournament every year.  If Ford wants to do better this year, he needs to work on his end-game seniors and make sure he doesn’t make the same mistake twice. Hopefully, there is still time for Travis Ford to write a new chapter in the Billiken basketball’s story.