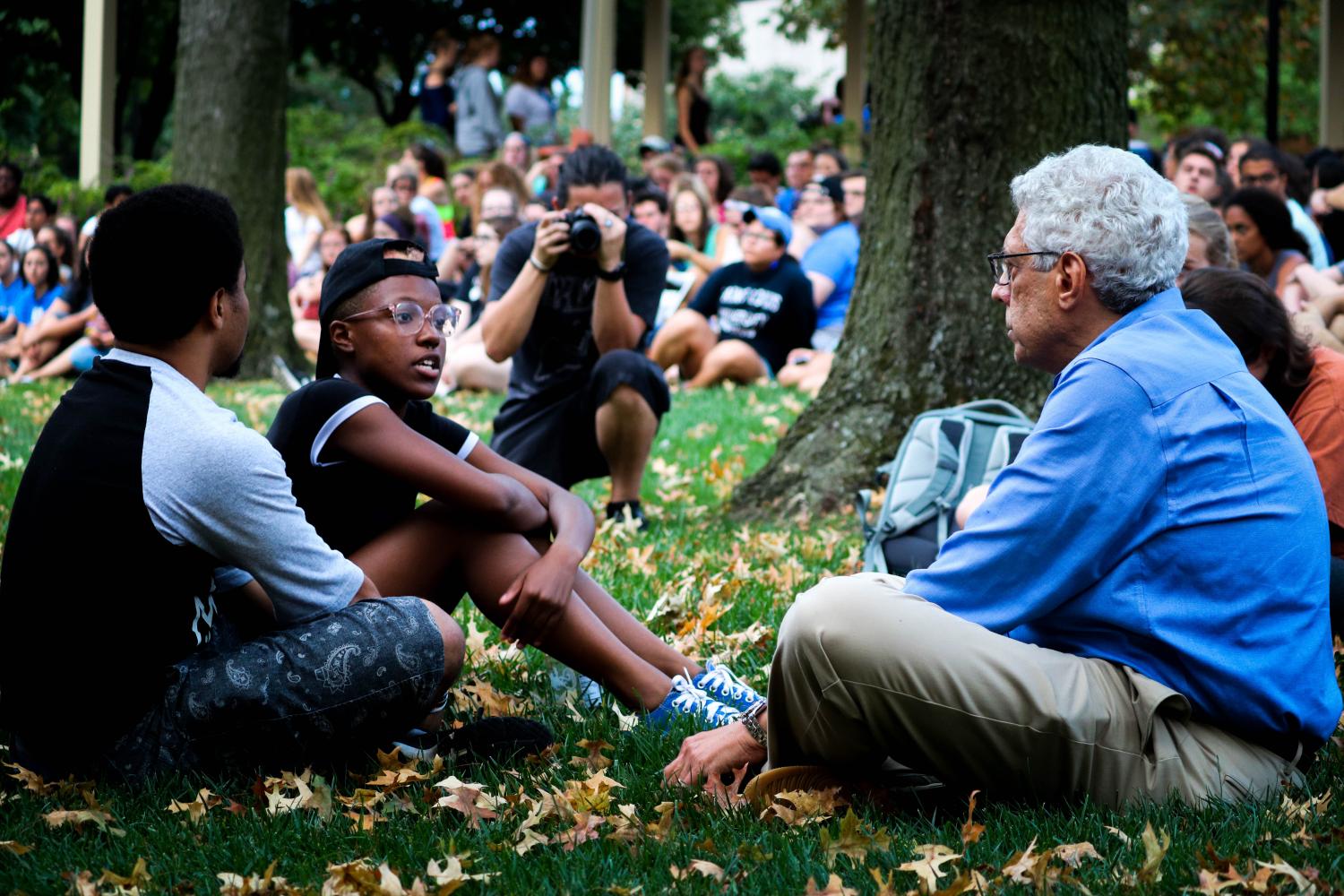 On Aug. 9, 2014, an unarmed 18-year-old, Mike Brown, was shot and killed by Officer Darren Wilson in Ferguson, MO. Over the days and weeks that followed, Ferguson and the whole St. Louis region became the epicenter of a national movement that would later become known as Black Lives Matter.

On Oct.8, 2014, another 18-year-old, VonDerrit Myers, was shot and killed by Officer Jason Flanery in the Shaw neighborhood just south of Saint Louis University.

The combined outrage of the two killings separated by a few months and less than 20 miles led to further protests involving hundreds. Over the next 10 days, protests occurred on campus with a combination of students and community members.

This included the Occupy SLU movement in which demonstrators camped out at the clocktower from Oct. 13-18. The occupation ended when the University, along with two community organizations, signed onto The Clocktower Accords. These 13 statements represented steps the University agreed to implement in order to improve the experience of black students on campus and invest in the St. Louis community.

The University received praise for the way they responded to the occupation including a personal letter from then Attorney General, Eric Holder. Now almost three years later, few of the accords have been realized.

While Dr. Smith may have a position in the administration, many say his office lacks the resources to effectively improve campus life and accomplish the remaining accords. During a teach-in at the Busch Student Center on Tuesday, a student activist described the apparent disconnect. “Any time something involving black or brown students comes up, Dr. Pestello puts it on Dr. Smith.”

Following protests this weekend, a group of student activists came together to revise the Clocktower Accords. The students, with connections to the Student Government Association, Black Student Alliance, and the Diversity Leadership Cabinet, laid out more specific goals to accompany each of the original, more general, accords as well as adding one additional demand. The 14th accord reads:

“The Clocktower accords must be recognized as an amendable and non-static set of agreements to represent the changing needs of POC and Black people on this campus and in the surrounding community. This will be achieved through a good-natured collaboration between a committee of marginalized students, SGA and administration.”

Students involved in writing the updated accords spoke to their motivations. “We saw this as an opportunity to push for the mission of this school, to push for what the original accords were.”

One of the writers told the University News “this happened really naturally and organically.” Another student added, “The reason we updated the accords is because racial issues aren’t stagnant and the thing that’s supposed to address them should not be stagnant as well.”

The revisions were designed with three larger frames in mind: the St. Louis city and region, SLU-specific academic goals, and opening the SLU administration to more people of marginalized backgrounds. As to the urgency of the revisions, one student commented, “Often times, after four years, the administration can kind of wait us out. With the original Clocktower Accords it kind of felt like the administration was just waiting us out. Just waiting until that last class left.”

Students of various identities have taken part in demonstrations over the last six days. One of the writers of the Clocktower Accords revisions spoke to this saying, “It’s not just black students pushing it. It’s the campus. And the administration sees that. I do believe that when Dr. Pestello came out and sat with us that day (Sunday), he did see not just black students, not just people of color, not just LGBT students, [but] he saw the white students — the students that make up the majority of this campus — supporting the accords.”

Students supporting the revision process passed out copies of the accords at the crosswalk on Grand Boulevard on Wednesday and are using the hashtag #200YearsLater. The hashtag is a nod to the upcoming bicentennial and was created to represent the ongoing improvements our University must undergo, even 200 years after its founding.